Does anyone have a custom reading list for Final Crisis and all the tie ins in order? It like in the storylines section they cut it back to just the Final Crisis named titles (ie Rogues Revenge, Legion of Three Worlds, etc).

Yes, do not read it.

Nah, Final Crisis is one of my favorite comic events period. Just in the mood to read it all again.

Okay, I started saying that the storyline seems like it’s in the right order to me, then I noted your “cut back to just the Final Crisis named titles” comment right after I hit post. So I deleted it, payed attention to work for a while, and now I see your point.

Interestingly, the storyline header disagrees with the book count, so this might be worth posting to the errors or story requests threads to see if someone on the DCUI side can take a look. 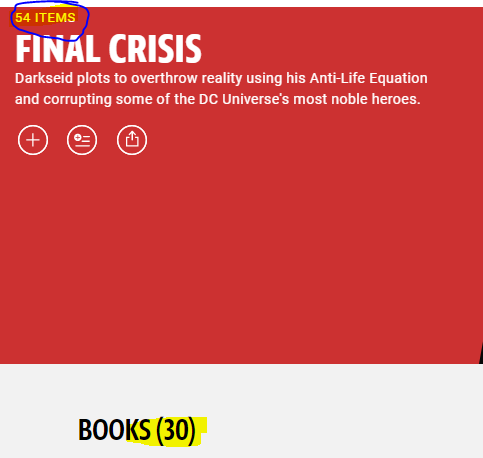 Anyway, I think the storyline matches the right order based on most reading order recommendations. Save, of course, for Grant Morrison, who advises Final Crisis 1-3, Superman Beyond 1-2, Submit # 1, Final Crisis 4-5, Batman 682-283, Final Crisis 6-7, and just ignore all that drivel written by others.

I think a moderately complete order would be as follows (anything not linked is part of the existing DCUI storyline):

Note: Most reading lists will comingle the individual issues of each “side story” with other issues. (e.g. Terror Titans #2 comes after Final Crisis #4, then #3 after Final Crisis #5) Since the existing storyline doesn’t do that, and groups them by title instead, I continued that pattern, as my recollection is that it doesn’t really matter that much. (If you bought TPBs, that would be a nightmare.) That said, it’s been a decade since I read this, and I don’t think I read all four of the Aftermath titles, so there may well be good reason to violate that pattern.

On the other hand, 12 years ago Alan Kistler made a strong argument for a completely different timeline-based order that starts all the way back with Seven Soldiers and Infinite Crisis (or arguably Superman’s Pal, Jimmy Olsen #133…) If you want to be that complete.