Just like to hear what everyones favourite comic/graphic novel . It Would be interesting to see what people enjoy .

Alan Moore’s SWAMP THING run had me reading it while I ate chicken alone in the basement. In short: has always kept ke riveted. Bissette and Totleben were the right guys at the right time for bringing it to life.

DC: The New Frontier, written and drawn by Darwyn Cooke in 2004, as a mini series, is my favorite.

Justice League: The New Frontier is available on video here and was released in 2008. It is a shortened adaptation of the story, ignoring issue one, set in Dinosaur Island

It is one of the few post Silver Age stories where excellent scientific, military, industry, broadcasting and spy individuals worked along with the few super humans to solve the potential destruction of Earth, though it is not broad enough to includr non Americans, except Clark and Diana, who are not able to fight in key parts of the struggle. This a film on American Excellence.

Women play a prominent role, as industry leaders, trusted with great secrets and experienced new reporters, trying to tell the public what is going on, in a great crisis. As well as Vietnamese women who take revenge against their rapists.

There is only one scene of John Henry Irons growing up, as a newspaper talked of Lynching, but the theme of this story is that we are all in this together.

Nowadays in comics, only super heroes save the day and rarely interact with human beings.

In the novel and in the film, there is a scene where the scientists, military, and super heroes walk together to get to their final positions and it makes me cry how we no longer see ourselves as American together.

Even Larry Trainor, of Doom Patrol, is there as a fighter pilot, going perhaps to death in the greatest of causes, survival. We only see his name tag, as a pilot in the sky warfare.

It reminds me of Superman yelling at the divided forces that they had to work together to survive the crisis, in this story.

Or of an educational cartoon published in the 1950s where Superman is telling boys and girls, black and white, that everyone of them was American, no matter their race or religion and to tell those kids who said otherwise what the truth was.

And remember in JL, Superman, Wonder Woman, Martian Manhunter and Aquaman were not ‘real Americans’. They were immigrants, but took up American ideals and acted as Americans.

That is what this story delivers, beyond great art, writing and locations all over America, as well as Korea and Vietnam.

Poster from 1950 I was talking about 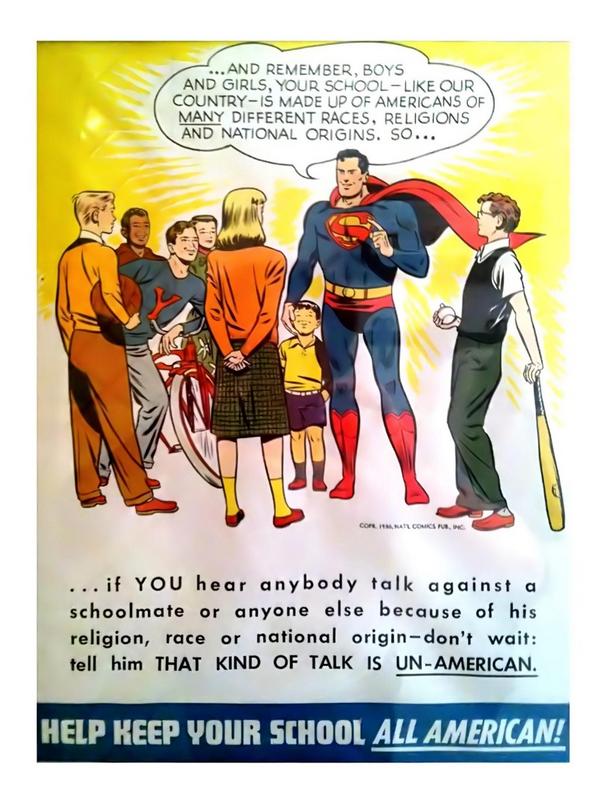 The Long Bow Hunters by Mike Grell and the ongoing series that sprang from it.

It is the story of Green Arrow that strips him down to the basics. Mike Grell took away the trick arrows (I’m looking at you boxing glove Arrow), moved him to Seattle, and gave him his new costume with the iconic hood. He also introduced Shado.

Drug smuggling, the Yakuza, the CIA, and more all in the initial three issue miniseries. We see Ollie’s deep love for Dinah and the lengths he’ll go to protect her. Much of the tone has been adopted by the Arrow TV series.

Turok, awesome write-up! The country’s in a bad place. And you hit the nail on the head. Everyone’s so concerned about our differences, instead of standing together.

My personal favorite is the Legion 5 year gap. Taking a huge cast of characters with tons and tons of history and “rebooting” without throwing anything away. What an awesome feat of writing. And the art is amazing. So much emotion based on shadows, facial expressions, and empty space.

The Legend of Wonder Woman is the first thing that popped into my head. I love that comic and would love to see and second part.