personally my favorite is clancy brown, kinda sucks cuz we don’t have any great live action one, hackman and spacey were solid, but i want to talk about eisenberg, i think he’s not good at all. I know what a lot of people are going to say, he’s luthor’s son read some comics blah blah blah, but he was a horrible character, i can’t really say eisenberg’s acting was awful, but he was NOT led luthor by any stretch of the imagination. So somebody might come with a long complex philosophy or theology sentence, but he hate’s superman cuz his dad beat him. SIGH, that’s it cmon man that’s awful, plus i think he’s smart but he’s not as charismatic as luthor, he acted insane, which luthor isn’t exactly supposed to be, evil doesn’t = crazy. I just thought he wasn’t good, he didn’t appear to be very strong and he doesn’t look good when he’s bald. I know a lot of people wanted bryan cranston, i would’ve loved that he’s obviously an incredible actor, but there’s others too if he wasn’t available. I just wish a grown man would play DC’s second biggest villain, not like jared leto was any better. One of my main problems with the dceu is the awful villains, zod was really good, and eisenberg started the new trend of the opposite. Overall, I hope you’ll understand why i didn’t like it, i’m not just hating to hate, i genuinely believe they could’ve had their first great luthor, but unfortunately they dropped the ball major. Also clancy brown was incredible i hope people will appreciate just how good he was as luthor.

Jesse Eisenberg is the best version of Lex Luthor we’ve seen in any of the movies. His outward persona seeming completely unlike like what you’d expect from a villain is the most brilliant thing about his character. He’s a clever modernization of the role, to resemble more of what today’s young tech industry leaders look like, not just sticking to the outdated stereotype of an aging businessman in a suit.

I only recognize Michael Rosenbaum!!!

i wouldn’t say it’s outdated lol Jeff Bezos is a bald white dude in a suit, and nobody wants Mark Zuckerberg (which Eisenberg played extremely well in the social network) because that’s Mark Zuckerberg, to say something from a comic is outdated is kinda ludicrous, by that logic superman is outdated. And is he? Absolutely not, some things are timeless like Lex Luthor there’s a way to write the character without it feeling outdated, just watch the DCAU, even young justice’s is much better. Eisenberg was off on every level from characterization to motivation, with everything in between. Plus the jolly rancher thing, pee jar and basketball were all super cringy.

I was talking about this today with someone and we both believed Eisenberg’s trembling twitching wimp was a disgrace to Lex Luthor. He said Vin Diesel which I disagreed with. Corey Stoll played a good “Lex” in Ant-man. He was bold, bright, had presence but was still somewhat threatening. All live action Lex Luthors have paled in comparison to the Lex Luthors in various animated events. Anyone who praises Eisenberg’s abysmal portrayal of Lex better not complain about a Black Superman cuz HEY! It’s modernized!

haha you know what’s up man i agree corey stoll could be good cuz he was like a dumber lex luthor in ant man, i just want a good luthor, spacey has potential but didn’t live up to it and obv he’s not playing him again lol. Cranston might be good anybody who saw breaking bad knows he can be one intimidating ass bald dude, but yea eisenberg was a complete disrespect to one of dc’s greatest and most popular villains

The others are all fine in their own ways, but those three are the best.

I’m excited to see Jon Cryer’s take on Lex. It should be good.

@tjjackson, Jeff Bezos actually doesn’t really fit the stereotypical stuffy stoic image of a serious CEO who’s always in a business suit that much. He’s often casually dressed, hardly always in a formal business suit, and fits more with the casual image of a modern tech CEO. Saying he fits the animated stuffy Lex Luthor mold just because he’s bald is the shallowest way of looking at it.

@superjumpers, is there something wrong with a black Superman? We’ve got a Polynesian Aquaman, don’t we? You’re trying to project the thought of complaining about a black Superman onto someone else, but it looks like you’re the one complaining.

I thought Aquaman was Atlantean

@harley, you’re missing half the story. Haven’t you seen the movie yet?

Twins? Or distant cousins? The glasses are not an effective disguise… 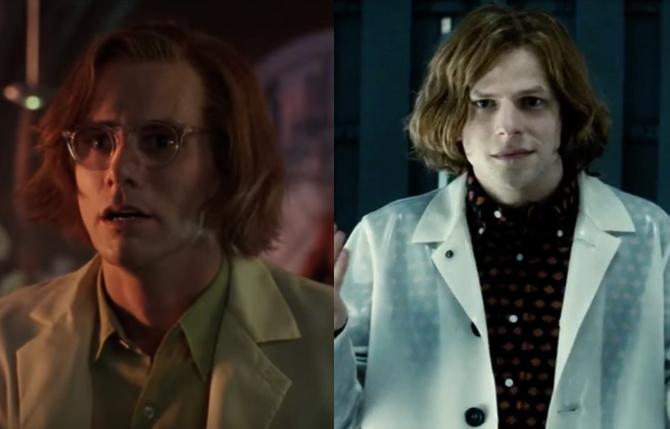 I thought the character Eisenberg played was truly awful. Yes, much more like the Riddler than a Luthor! I’ll always have a soft spot for Hackman but I think Michael Rosenbaum probably was the best interpretation of the character.

@XNam360 I didn’t say anything about not liking a Black Superman. Stop projecting. The two worst portrayals of villains in live action have been Eisenberg’s Luthor and Leto’s Joker. “Oh but they’re a fresh new take!” Bullsh!t. Do I want a pansexual bi-racial jolly Batman who beats his opponents with ballet instead of martial arts? Nah. Sure is a new take tho! Even Spacey’s effeminate Luthor had more presence than Eisenturd. To each their own but when someone praises Eisenberg or Leto for their DC takes I’m pretty sure the convo is close to over.

i’m not saying he fits the mold but the guy said long hair and twitchy=modern ceo, and that’s not true when the actual god of ceos right now is bald and and tall obviously he’s gonna look exactly like luthor or anything luthor’s a fictional character

i don’t think it’s racist to not want a black superman lol that’s like complaining about making blade white, people should do it it is going against the origins of a character

As far as my personal favorite iteration of Lex is concerned, it’s Jesse Eisenberg’s hands-down and without question.

@superjupers, you’ve quite blatantly used “Black Superman” as your example of choice to illustrate something that’s supposedly unacceptable and shouldn’t be allowed. There’s no denying what you said.

@tjjackson, that reeks very much of the argument that Jason Momoa shouldn’t be allowed to play Aquaman because he’s the wrong color. I don’t care if it’s going against the origins of the character. He was awesome in the role and that’s what matters, not what color he is.

@XNam360 I used Black Superman to match your “modernized” excuse for Eisenturd. Where did I get the idea from? From a YT video mentioning Michael B. Jordan as a Superman possibility. The outrage and hate is on there, not from me. There’s no denying Eisenberg is the worst Luthor to date. Heck I’d even take the “who’s your daddy” Lex Luthor from Superman: Doomsday. Again, at least he had some sort of presence.

This thread got me thinking, I wouldn’t mind seeing Idris Elba take a crack at Lex; channeling his time on The Wire as Stringer Bell. A quiet, yet powerful presence. Understated threat always present. Always has an angle, playing everything like a chess match.