What’s the line from a comic, or it could be from a movie that had a big impact on you, or just was flat out cool or was significant for the character. For me there’s a lot, but one of the ones that I can think of has to be from Batman in TDKR, (and I’m paraphrasing here) when Superman says if I don’t stop you someone else will somebody will come after me and Batman just responds with “Really, who do they send after you?”, that was just SO badass and confident it just let the audience know Batman’s state of mind, and really showed his characterization in the novel so well.

There’s a ton of memorable lines and quotes for me as well, but the 2 I thought worth mentioning for me is in: 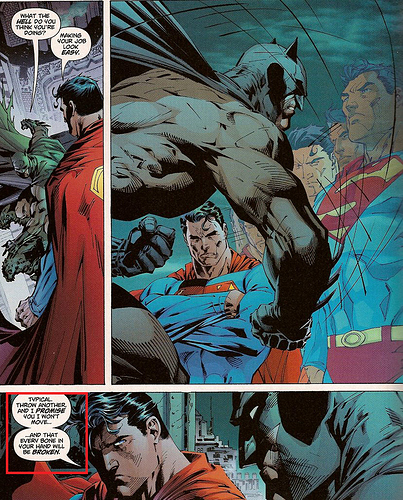 “You’re not dealing with some punk kid Ratbag. You’re up against THE FLASH!” Wally West, FLASH Annual #8 1995
But this is my favorite:
Batman: CAPTAIN BOOMERANG, Wally. he’s one of YOURS. If you CAN’T take care of your OWN rogues-- If you can’t REIN them IN…Then I’LL do it FOR you.
Wally/Flash: Are you FINISHED?..I want you to know. You TOUCHED me because I LET you touch me. And do you THINK the rogues here are SIMPLE? Do you think just because they aren’t mentally SCREWED to the oil that I have an EASY time? Your guys are DIFFERENT, Bruce. They work on a completely cerebral level. They Leave CLUES, they like to KILL. MY guys? They’re organized. They may have GOOFY names and wear BRIGHT COLORS, but that doesn’t mean they’re IDIOTS.
Batman: He lost his father, Wally. To Captain BOOMERANG.
Wally: In your head, it should have been the JOKER or TWO-FACE that killed Jack Drake. Is that it? Would that be more acceptable to you?
Batman:…
Wally: I’m trying my BEST here. I really am. Bruce…?
Batman: We don’t always WIN. Is THAT the lesson learned? Or that we SHOULDN’T try to have a life OUTSIDE of the MASK? Superman, Green Lantern, You. Even WONDER WOMAN has her friends at the embassy…I don’t know what to tell him anymore, Wally. SORRY isn’t ENOUGH.
Wally: Tell Tim what you told Dick the day he left to join the Titans. In all these years, you only said it ONCE. But it meant more to HIM than anything else in his entire life.

“For the first time in a week, I stop thinking like Batman. And I start thinking like a Titan.” - Tim Drake that one definitely hit me hard. Another one from Tim is, “Your problems are worse than anyone else’s, because they’re YOURS.”

Justice League (New 52) #3: Wonder Woman makes her first appearance in battle with Flash saying " Wow." upon seeing her, while Hal says “Dibs.” It’s simple but I always chuckle at that scene.

All Star Superman were Morrison wrote one of thyhe most supermanyist scenes to ever grace comics movies or anything for that matter. Superman to the suicidal girl “Its never as bad as it seems. Your much stronger than you think you are trust me”

XUM: What can you do, apart from talk to fish?
Aquaman: Let Me think… I can locate your brain’s BASAL GANGLIA, the part inherited from your MARINE ancestors…and, just for starters, I can give you a SEIZURE.
XUM: EEEEUUUUU
Aquaman: This one doesn’t want to FIGHT. He’s got a HEADACHE…Ah, Sorry. I really have no idea why I said that…

The ending of jack Kirby’s new gods #8 where Orion and lightray are up on a high building in metropolis and have a nice conversation where lightray says “you know I somehow never viewed the earth individual as being that resourceful” Orion says “Don’t hide the real issue lightray! YOU SAW MY TRUE FACE.” Lightray- “ YES!” While stuttering “I—I also picked up your helmet while in flight!” Orion says again “ YOU SAW MY FACE!!” Lightray- “I saw scars— both new and old— taken in the case of new genesis!” Orion then says “your a GOOD friend lightray!” That’s the power of friendship.

"This isn’t a mudhole, it’s an operating table, and I’m the sergion.

“After all this time–all these years–you and I have history. I know what you think of me. You think I’m just a doll. A doll that’s pink and light. A doll you can arrange any way you like. You’re wrong. Very wrong. What you think of me is only a ghost of time. I am dangerous. And I will show you just how dark I can be.” Harley Quinn - Gotham City Sirens #24

“Bruce always seems surprised that I’m able to locate him so easily… like I can’t hear that belt full of tracking devices.” Superman (Trinity, by Matt Wagner)

“Circus. He said it was in the circus.” Harley’s moment of realization that he betrayed her. And yet, 10 years or more, she never fully rejected him. Then, he just died in the flashback of Return of the Joker. But by then, it was too late, because Ivy died first in The Flower Girl. D:

84mdcb
Kudos, I read through all the posts ( all good btw) and was hoping nobody had posted that one yet. I still get chills when I see that part in Batman:The Dark Knight returns.

“We’re the last of a race of scientific villains.”

Superman 75:
Superman: Doomsday…is he…is he…
Lois Lane: You stopped him! You saved us all! Now relax until…

Even though we all knew he was going to be brought back, it still brings a lump to my throat that with his “dying” breath he still wanted to make sure everyone else was safe. It is what a hero should be.

@implusemaxmercury I got teary-eyed by reading your post. Powerful stuff.

@JLWWSM thanks! I just recently re-read the death of Superman storyline on this site and forgot how many good character moments there were. Yes, we knew he was coming back to life but the character reactions felt real.

The death of superman was probably the most heart quenching moments in DC comics. Right next to Batmans “death” in Final Crisis. Which brings me to my favorite line. Bats breaks out of the cell with the god killing bullet hidden in his belt, Darkseid- " can you outrace the omega sanction beams? The death that is life!!

Batman - “try me.” A man against a god no super suit or armor just pure selflessness. Sacrificed himself to mortally wound Darkseid. That is my favorite moment.

I’d have to agree with @impulsemaxmercury, that part in the death of Superman was pretty powerful. I really liked that whole arc, you know what’s coming the whole time but they still built the suspense really well. The final battle and moments immediately after really affected me. I read those comics until they were worn out and I have death and return trades today and read them regularly.