What are your favorite comics that are thought-provoking character studies? I was looking for some suggestions and Im also curious what everyone generally thinks.

Some of my favorite thought provoking character study stories:

Saga of the Swamp Thing by Alan Moore

The Killing Joke by Alan Moore

The Green Lantern by Grant Morrison

What are your favorite stories that are thought provoking character studies of iconic or obscure characters from DC? 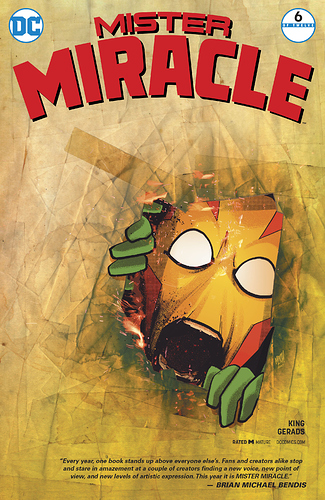 It’s a character study of Gotham City and just like the town itself , it’s disturbing.

As with you, Mister Miracle is a favorite of mine. Also by Tom King, The Vision is fantastic. All-Star Superman, The Return of Barry Allen, and DC: The New Frontier are all great comics, too.

When it comes to Green Arrow, you’ve got to talk about The Longbow Hunters, by Mike Grell.

Green Lanterns was a terrific character study of Jessica Cruz.

Red Hood: Lost Days is as good a character study as you can find on Jason Todd.

And of course, if you want a study of The Question, the best place to go is Denny O’Neil’s 1987 run on The Question.

Great list! Many of my favorite books on there. Gonna take the ones I haven’t read as recs!

Would add Morrison’s Animal Man as a powerful portrait of a DC character on the more obscure side. And Lemire’s Animal Man run is also excellent, focusing on the superhero with family, a little like King’s been doing with Mr. Miracle and Vision. It’s also on the app, while Morrison’s isn’t.

I’ve found Lemire’s work to be consistently excellent with regards to character.

@DeadmanBrand I agree. Lemire is a consistently good writer, his Animal Man run was one of the best New 52 titles.

Ill have to check those titles out @HCQuestion. Jason Todd seems like the perfect character to do a character study on.

Batman: The Long Halloween and Dark Victory for Two-Face.

The Man of Steel for Superman.

Nightwing #51 for Tad, of all people.

The Great Darkness Saga - Darkseid
Even though most of it is LoSH, you see by the end how masterful, strategic, and long game Darkseid is. The master puppeteer of DC villains who reach bends through time and space.

Those are good recommendations. Definitely interested in a thought provoking Legion of Superhero/Darkseid story, that sounds like an epic idea already.

@BatJamags Oracle is another character who seems like a good choice for a character study. Shes been through some serious stuff. Man, the Bat-family doesnt really catch a break now that I think about it, ever.