With Wonder Woman movie, Disney’s Mulan movie and seeing the success of Harley Quinn a new Far East Asian heroine Character would be possible! With all the hallmarks of Diana but with heavy mystic powers as Zantanna. Caught playing with Ras Al Ghul pits in Gotham… instant storyline. I don’t know how I would reach the writer’s corner of the DC but I know when’s a good time to spark new ideas just by the recent events that shape up new ideas and creativity. Hell, we could have this character play with a Nuclear President time event that she must prevent, etc… I’m a decent illustrator but I don’t have the chops for writing. Thoughts???

I think you need to check out New Super-Man, a 2016 title which features a Chinese Wonder-Woman with a mystic origin! The whole series is right here on DCU.

Talia al ghul is almost exactly that. I get where your heads at tho & nobody’s ever made it by being told yes the 1st time they pitched an idea. Trust me, I’ve pitched plenty & got zero responses. So you’re off to a better start then me. Stick with the idea but think of a twist that’s never been done. Novice advice from far then an expert but just trying to help, even tho I’m clueless on the subject, lol.

Totally was off my radar! Another book I missed— it wasn’t appealing. cause let’s face it, it didn’t happen cause it wasn’t anywhere in America (ie Gotham, Metropolis, Star City, etc.). Pretty sad. Another problem, they’re not Americans. Introducing a whole other country (namely China) for American youths to emulate is a tough case; just think of the kinds of remarks: “she’s from China… go back to China.” And it doesn’t help when adults see negative media about China either. That’s not the kind of attention you’d want for your readers. Also, “China?” Like is there any other country in the Far East? The concept of Wonder Woman was that she is an immigrant and resides in America. My idea is just that as well, another immigrant residing in Gotham or Metropolis or wherever… in US. Wouldn’t it be awesome that the character took refuge initially with Muslim assassins, have double sabers, Roman soldier leather costume with head scarf and have a militant demeanor like Batman but sensible as Diana! Well, it’s just a pie in the sky. But what do you think. I’m heading to the sketch pad and making my characters. The sad part, as a hardcore DC reader, I wish we could use the landscapes that DC has for my characters to elaborate how and why my antagonist became a heroine. Thoughts? 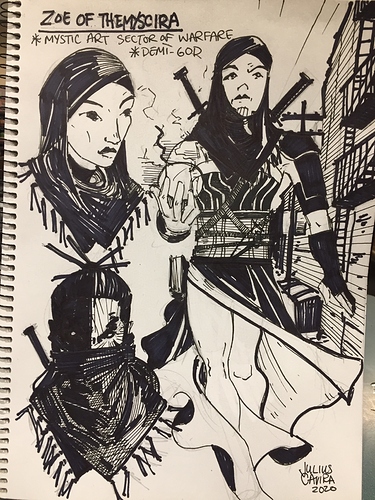 First off, respect! I totally respectfully acknowledge that what I said can be disrespectful and I am sorry if I offended anyone. Aside from that, my drawing chops are not up to par with the talent that’s out there. I know for a fact that I can improve and have done legit work that deserve attention. The image I uploaded is my humble concept and feel it can work. I did the research and feel that the leather is the entire costume. Upper body is a hard shell seen in Wonder Woman movie. The belt and strap are to hold weapons and sabers seen in Medieval Asia. The rest is a design seen with Circe, WW arch enemy. I thought it would be adequate for her to have a book of mystics strapped on and a conscious mystic ball of energy for company (ie like Booster Gold). Possible powers: Demi-god status, flight, immortal but must respawn, invisibility, grandmaster martial artist and reinterprets the practice, weapons of choice- magic and when to reenergize fights with double saber seen in Tai Chi! Thoughts???

Besides the perfect recommendation of New Super-Man by HubCityQuestion, I would also recommend reading The Great Ten mini-series. Like New Super-Man, this series also revolves around Chinese superheroes. 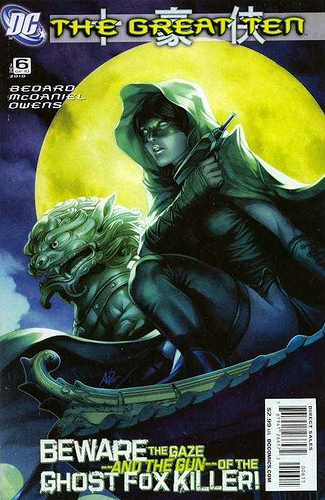 Yes! I completely agree. It’s sad that when the 10 did go head to head with the Justice League, they lost. Which is to say, the characters aren’t sustainable because of their defeat. I’m a Patriot, and in so saying I love American superheroes. I do understand what you’re saying… it’s all been done before and to introduce a new character would be futile. I do challenge the idea since with the times that we are in, cultural insensitivities, political incorrectness and tribalism is rampant, many DC characters from yesteryears ago must be retold. That’s the obvious next move. If I could be so bold, I dare DC to revamp a character that eclipses Harley Quinn! Like, OMG, Harley Quinn is literally a Rock Star! I loved the character! Dini & Tim knocked that out of the park or really got lucky by way of Batman! The Detective cartoon have done it… over and over again. Anyways. Thanks again for the heads up. Still love my character, as do many other artists do about theirs.

HI there, wondered about your thoughts on revamping a DC Comics Character that has the power of Wonder Woman and Shazam, Son of Vulcan! I did some research and I think the hero is ripe for a fresh take. I thought about changing the hero to a heroine! As the origin states that a God named Vulcan came down and chose a soldier who was heavily disabled from war and gave them mystical powers, pretty awesome stuff! Well, that fits well with my character that I thought of but, the Daughter of Vulcan is way cooler! Attached is my concept for the heroine… 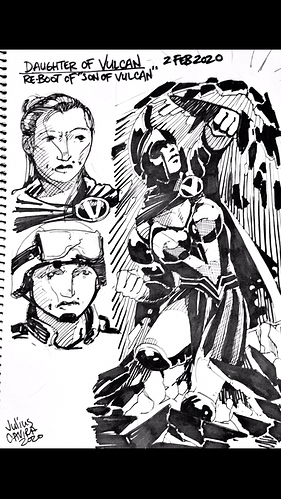