Fans Of The Warlord Unite!

Who among us loves fantasy and high adventure as only The Warlord himself can do it?

What are your favorite stories of Mr. Travis Morgan and what would you recommend to someone who is either new to the character or not new to him, but still relatively unfamiliar with his grand adventures?

Sound off below (and watch out for Deimos too)!

I really hope The Warlord gets added to DCU’s comics library. I started reading comics a few years before the original series ended, but never sampled it. I guess that I wasn’t too interested in the ‘Sword and Sandals/Fantasy’ genre. Now, I look back and feel like I missed out on something good… especially the artwork by Mike Grell and Dan Jurgens.

Any thoughts on Arion or Arak? These two forgotten series also look interesting. 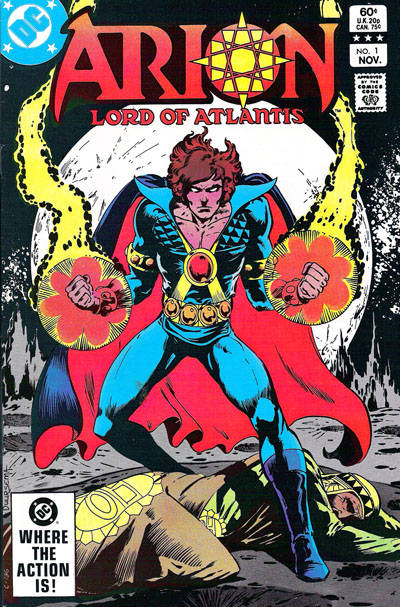 I’ve not read those. I know of Arion because of his former connections to the Karen Starr Power Girl but that’s about it.

I did notice a couple Crisis on Infinite Earths tie-in issues of The Warlord are here. I love his character design.

Unfortunately it looks like the two issues that are on here now are all that’s been digitized thus far. I’m hoping to see more because this a character I’ve wanted to learn more about ever since his action figures were competing with He-Man for shelf space in the finest grocery stores and five&tens.

Arion on the other hand has a substantial amount of his catalog available on ComiXology. Looking forward to taking a deep dive into that once it becomes available (pun intended).

@The DemonEtrigan I remember seeing ads for the Remco Warlord figures in comics when I was a kid. I’d like to get a couple of them, but they’re probably far more expensive than they’re worth.

The only Warlord series I’ve consecutively followed was the ongoing that ended around 2010 or so. I liked it quite a bit. For whatever reason, the comic store I was a regular at at the time never pulled it for me even though we confirmed it was on my pull list and on my pull printout whenever a new issue came out. I bet Deimos was to blame.

Has anyone read the short lived Warlord series from the mid-00’s? That one looked interesting to me when it came out, but I never read it.

I would recommend the entire original series, but I’m biased.

If you can’t read it all, get First Issue Special #8 and the first 15 or so issues. In the initial run the comic was bimonthly so the art was fantastic! Mike Grell wrote, penciled, and inked for a single vision and incredible detail. After that, the monthly schedule and Vince Colletta’s workman like inking took from perfect to merely great.

If you love Mike’s work he’s running a KickStarter campaign for his creator owned work Maggie the Cat. Check it out and support him!

@Vroom Do you mean the series from 2009-ish? I read it and it was good. Worth tracking down the issues or the trade of the first 6 issues.

If that’s the most recent Warlord ongoing, then yeah that’s the one. I don’t own it anymore and don’t remember anything of it except that I liked it at the time.

That’s really surprising that Warlord has so little digital content available. Are there any trades that collect his original series?

The only other things I’ve experienced Mr. Morgan in are Justice League Unlimited and Convergence.

Warlord is one of those titles that I never picked up, but always wanted to. I think Crisis basically killed him off, and I started reading right about that time. Nevertheless, I always saw it in the long boxes, and thought it looked pretty awesome.

@Vroom There isn’t much in the way of trades, only a B&W Showcase from 2009 with 1st Issue Special #8 and Warlord 1-28 and The Warlord the Savage Empire from 1991 in beautiful color with 1st Issue Special #8 and Warlord 1-12. Savage Empire is a beautiful trade with good quality glossy paper and additional new illustrations as chapter breaks. I got mine on eBay for close to the original $19.95 cover price.

The Warlord is one of my favorite. Can’t wait to get the full run online!

@Vroom. With the fast changing world of computer file storage I wonder if it would be able to find the files for The Savage Empire and create modern day digital copies of those thirteen issues. Hard to believe 1991 was 18 years ago. Were printers using digital files back then? Quark files? The Showcase B&W line art looked good and is only 10 years old (2009), it would just need to be colored.

With DC canceling/delaying omnibus collections like the Brave and the Bold Vol. 3 I don’t hold out much hope for new editions of The Warlord in either print or digital. If one of the trinity can’t get published Morgan’s never going to escape Skartaris.

I imagine digital is one of the main reasons that omnibus trades of older material are falling by the wayside. DC has been consistently expanding their collection of older digital titles and there is only so much material available. Unless there are either rights issues (either with Mike Grell or possibly whoever owns Remco) or the issues themselves are missing from whatever archive DC uses to reproduce to print or digital (hard to believe given the series was only published in the 80s) I’m confident Warlord will eventually come to ComiXology and DC Universe.

Wow you’re not kidding there’s only two issues on Comixology as well.

It’s funny how time changes things. Back in the seventies when this came out we were all excited by Mike Rouse artwork and still are but also with the Edgar Rice Burroughs-type theme of a well-hidden world under an ice cap being a jungle and the mix of the fact Travis was an Air Force pilot with a gun in a world that also had the sword & sorcery aspect was an exciting New Concept and Hey Nobody’s running around in their circus outfit.

I will admit, looking it over now, it’s a little embarrassing to see how scantily-clothed everybody is and it’s like maybe they can wear a little more clothing if they do a reboot of this…

I only personally own Warlord issues 8 through 16 pretty much I guess I better not get rid of those since they haven’t been digitized yikes!!!

Besides two issues of his own book and Convergence, another DCU comic spot we can find Warlord at is Aquaman #71, from Dan Jurgens’ run on the 90’s series.

I was thumbing through that series a few minutes ago and pleasantly surprised to see Warlord show up.

Warlords always been on my futures list. Right up my alley.

A couple more appearances we can look forward to being added here in the forseeable future:

A fun little guest spot in the 80s Green Arrow series (the ongoing sequel to Longbow Hunters) which is made all the more amusing by Grell’s illustration of Ollie and Travis’ conspicuously similar facial hair.

An arc of the post-Rebirth Trinity series from about a year ago where Superman, Batman and Wonder Woman end up in Skartaris. I’m particularly looking forward to this because I bought the first two issues but missed the ending.