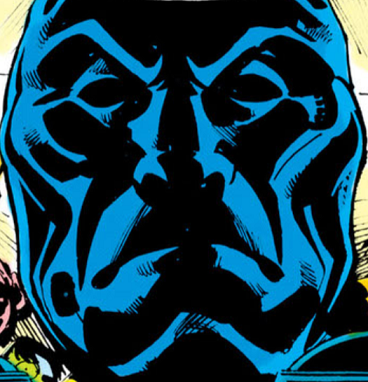 The Renegade Robins Club introduces two brand-new rogues for Batman: Darkwolf and Cutter! Oh, and some dude named Black Mask premieres in these issues, too. (Like that guy will ever appear in a movie, right?) Catwoman and Calendar Man drop by as well. 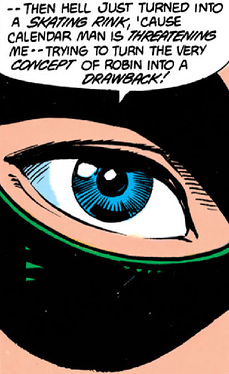 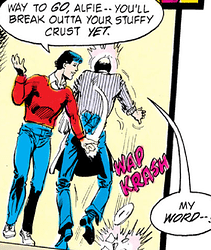 Poll Question: Who is your favorite villain in these issues?

Just finished #383, and y’know, I voted “Bruce’s insomnia” on the poll there as a gag, but now reading through that issue, I think it is legit his worst enemy, yeesh! I really liked that issue – it’s rare to see Bruce have such “normal” problems like that.

Also, looking at the summary for #384, I’m surprised that it isn’t on here yet, I figured anything with The Monitor/a Crisis tie-in would have been digitalized by now.

Also, looking at the summary for #384, I’m surprised that it isn’t on here yet, I figured anything with The Monitor/a Crisis tie-in would have been digitalized by now.

It’s really unfortunate. The issue is actually quite good. It’s the first time that Calendar Man ever received much in the way of depth, and much of the issue is dedicated to his conflicted feelings over the thought of killing Batman.

Yeah, and seeing the summary describe all the different outfits he wears to fit the holidays made me think “Gah, I want to see the undoubtedly horrible outfits!”

Well, you can see two of them in this Tumblr post.

By the way, am I the only one who gets a bit of a Bruce Timm vibe from Batman #383’s cover? 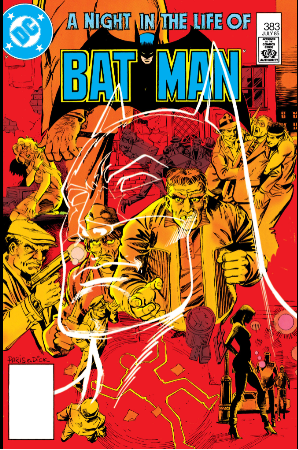 Not that it carries through into the interior art… 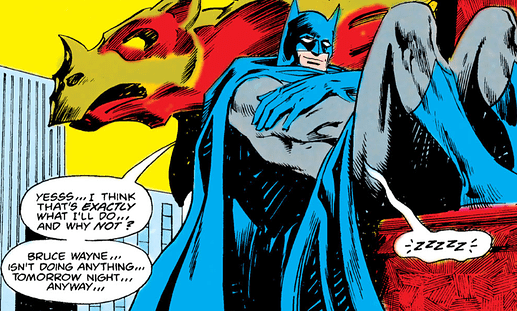 I can definitely see it with the outline Batman, not so much with the seedy crime elements around him.

And it’s funny, when Batman’s talking to the gargoyle at the end, I was half expecting him to call the gargoyle “Bruce.” Then I remembered that was Spider-Man’s thing and Batman’s the reason why he calls the gargoyle Bruce. 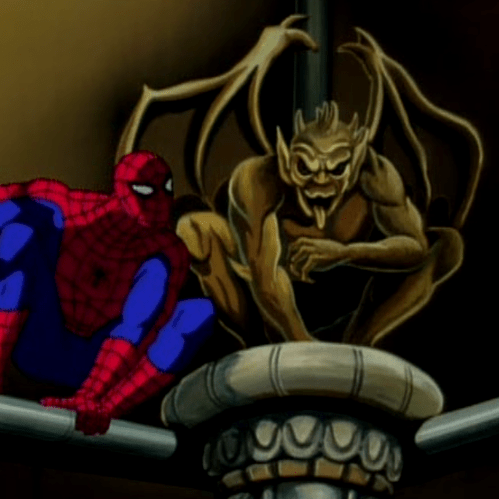 I can definitely see it with the outline Batman

Yeah, that’s what I meant, and I nearly edited the comment to clarify that point, but I didn’t want one of those ugly edit icons in the top corner of my post.

Eh, that always happens on posts with photos, I think because the forum software does something to resize them as an edit after.

What was your favorite Jason Todd moment this week? Can you relate to Bruce’s day without sleep? Are you as buff as Vicki Vale?

My favorite Jason moment was his refusal to sit on the sidelines just because some loon na!we Calendar Man threatened him. And then talking Batman into letting him participate.

I’ve had insomnia before, and been too tired to sleep…I have a feeling we can all relate.

I am not as currently buff as Vicki, but I’ve been working out all January so I may get there again. Right now I have a definite dad-bod.

What did you think of Calendar Man’s story? Black Mask’s? Darkwolf’s? Cutter’s?

I liked all of them. This is my first time reading the Black Mask issue, so those stood out to me.

Black Mask’s debut tale was still canon after the Crisis. What other stories from this era would you retain in continuity?

Man, somewhere along the way I’m just completely stopped being about continuity. Just tell me some good stories and I’m good.

What did you think about Green Arrow’s run-in with the law? Was Ollie in the right?

Speaking of “tell me a good story,” I stopped reading the Arrow backups several issues ago. Not doing it for me.

If you have read Superman Annual #11, what did you think of Alan Moore’s depiction and use of Jason?

I loved it. I liked seeing him meet Wondy for the first time, and I loved how Moore used Jason as an instrumental part of winning.

Oh, and that insomnia issue is one of my favorite Batman issues ever.

Yeah I loved that issue as well. I laughed in a few places even.

Alright… took me a while to get through all of these. Like other members have said, the issue about Bruce being exhausted and tired was fantastic and by far the best issue out of this set.

The other stories… eh. I get that this is a different era from current Batman, but it seems like every street level thug or bad guy who gives himself a name can almost go toe to toe with Batman fighting skill-wise. I don’t know Calendar Man’s backstory, but he stood toe to toe with Batman in one issue, barely escaped Robin in another, and then was defeated by both working together.

The Cutter issue I more skimmed than read. Felt like fluff or filler.

I haven’t been reading the Green Arrow back-ups. I usually read these on mobile so it makes it a little hard to read these books back to back since the stories jump from one series to the other and less incentive to read Green Arrow back ups.

Robin came across as smart and thoughtful in the Superman Annual. Like he came up with a plan and followed through whereas the other heroes were more reacting to what was going on around them. But he also was outside of the main action of the story with allowed him to do that. Probably why he was included, otherwise why bring Robin to Superman’s rather intimate 2 guest party.

One thing that has stood out to me in this week and last week (the only weeks I’ve read so far) is that Jason continues to make a lot of reference to his origins. I’m sure if they tried they could talk about the circus a little bit more, but there is a good amount of “because of the circus I can do xyz:”

I don’t know Calendar Man’s backstory, but he stood toe to toe with Batman in one issue, barely escaped Robin in another, and then was defeated by both working together.

Again, I wish that the missing issue from this week was on here. It provides Julian Day’s backstory. Anyway, Calendar Man had appeared twice before, once in a 1958 story by Bill Finger and again in a 1979 story by Len Wein. In both stories, he was a formidable opponent for Batman both mentally and physically, so the arc we’re reading now is following a precedent.

I prefer the physically intimidating verson of Calender Man to his later portrayals. He may be a goofy themed villain but at least he looks like he could be a real threat to Batman in these issues.

Those costumes of his are great too.

@AlexanderKnox- I dug through my long boxes today trying to see if I had that missing issue but no such luck. Must have been in one of the boxes I lost in a flood years ago.

Same here, I’m more used to him being a creepy Hannibal Lector type. Though now that I think about it, the Calendar Man in the Arkham games is an absolute unit and might put up a good fight if needed.

In regards to these issues, I’ll just say that I found them a pleasant relief after the tedium that was the Night-Slayer arc. He seemed determined to ruin every Nocturna story.

Darkwolf is the first hint at where some of the late 80s Batman stories are going (international terrorists and foreign assassins!), though the costume is utterly silly. I do love the hokey name, though. If he had appeared a decade later, he’d undoubtedly be called Daarkwulf, and he’d be covered in thousands of pouches.