Their film next year will acknowledge there are other universes out there, so I imagine behind the scenes, Warner Brothers are already looking for the next Flash. If not, they should be. 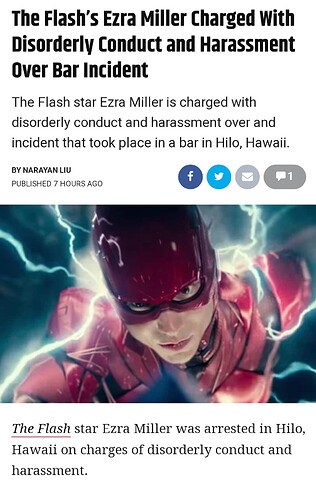 I doubt this will cause any more delays – no one in the general audience is going to remember this in a few weeks (not even sure if they know now), let alone when the movie comes out next year.

I will say that it seems like Ezra has a habit of bad behavior while intoxicated, and I hope stuff like this will wake them up to the fact that they might need some help.

I doubt this will cause any more delays

Especially considering it already recently got delayed to next year. It’d be a different story if they were still filming

I will say that it seems like Ezra has a habit of bad behavior while intoxicated, and I hope stuff like this will wake them up to the fact that they might need some help.

It hasn’t so far, and doesn’t seem likely.

If I were WB, I’d be on the lookout for a brand new, more trustworthy Flash.

Especially considering it already recently got delayed to next year.

I hope no more delaying will take place

The current release date is February 31st 2023. Not a good sign.

If I may, I believe this was said to prevent any incidents of misgendering Miller in further comments.

Gotcha. I live in Texas, so I think auto pilot for me is to be on defense.

Thanks for saving my search history from having that result.

Being a superhero does stuff to a man. You hear what happened to the guy who plays Homelander?

I am a superhero and I do not choke people. I only throw batarangs at their heads.

I knew there was something about him I didn’t like, and he got arrested for it. Now I’m rethinking about seeing The Flash movie.
Hope he learn from this and try to be a better person by respecting others.

I was only interested anyway in seeing Keaton return as me.

That is a bad sign since February 31st doesn’t exist…or does it in the multiverse…hmmmm.

This is from an article from Screen Rant on March 9.

Warner Bros. announced a number of release date changes to its 2022 and 2023 slate today, which included the delay of The Flash . The movie will now be released exclusively in theaters on June 23, 2023, roughly seven months after the previous November 4, 2022 release date. This means The Flash movie will arrive over five years after the original release date given to the project by WB and DC.

I read this article and it mentioned one of the directors leaving a while back. His reason for leaving was the tone. After seeing JLSC and the Keaton news is it safe to assume the movie is going to be goofy like Shazam or Birds of Prey…