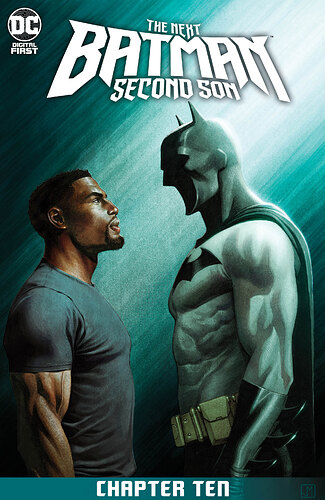 This week, our friends in Publishing have shown us a small #sneak-peek into the ongoing legacy of Batman, and the mantle’s quest for true justice. Now, as ever, the fight is complex and paved with good intentions. 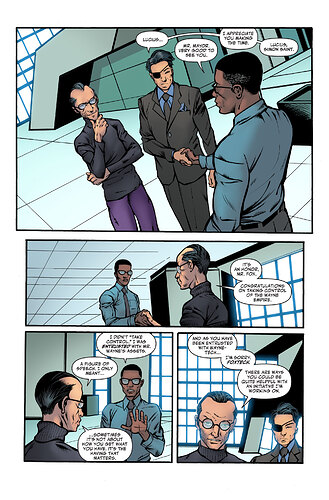 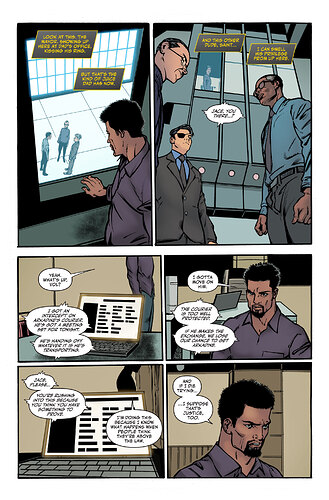 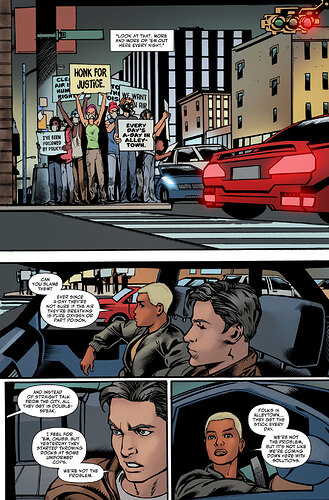 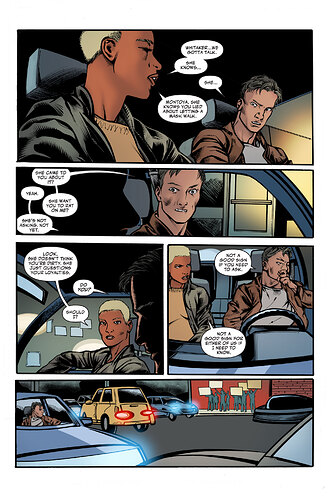 Synopsis: Tensions in the GCPD run high as Mayor Nakano’s anti-mask policies are dividing the force…and a brutal round one between Jace Fox and Eabha O’Roark doesn’t go the way anyone expects!

Pre-order your copy today by dialing up your favorite FLCS.

Have you been reading THE NEXT BATMAN: SECOND SON? Let us know what you think in the comments below!

I am somewhat surprised by how much I’m enjoying this. I pretty much thought I would, but it’s even better than I, well, thought.

And only two more issues left after this one…

Really looking forward to how it all ends.

And if there’s more after that, and John Ridley is writing it, great, I’ll probably check it out. 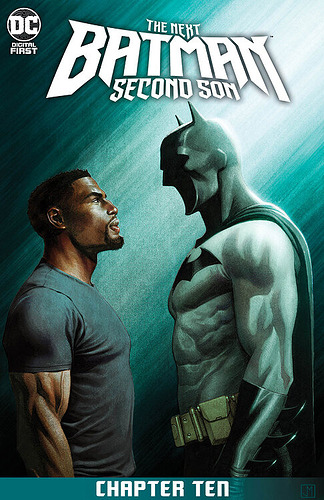 Jace: you’re not taller than me!
Batsuit: Yes I am!

Jace: I’m Batman!
Batsuit: Sorry I can’t hear you down there.

Jace: Man I’m gonna get so much Halloween candy this year.
Batsuit: damn right we are.

Edit - Oh, I see. It’s a typo in the header. Had me confused there for a second. I haven’t even started reading this yet but the preview looks great. I may have to go back and start from the beginning to get caught up!

Fixed the typo, thanks for the heads up!

This has been way better than expected. I was slightly disappointed after Future State, but Second Son has more than made up for it.

I am not really excited about this series. I am not saying it is poorly written because Ridley is amazing. But, I can’t get hooked enough to care about Jace. Maybe if it was Luke Fox I would have been able to, he has history with the Bat family. But I could not figure out Jace’s motivations and had to stop.

It has been a slow reveal, but we’ve finally gotten to the part of this story where those motivations are being revealed. I personally though I would dislike this series, as I also prefer Luke Fox (but he’s got a pretty decent part of this story!), and I disliked The Next Batman in Future State, but Second Son has been a whole lot better - really fleshing out the world and motivations of the characters.

I’m so pumped for this! Jace’s series was the highlight of Future State for me and I’m so excited to keep seeing his story expanded. I understand why some people would have preferred Luke, but I think Jace has worn the mantel well and has earned the title in my eyes. I’m excited for more Batman!

Yes, I have been reading and I am really disappointed. I had been hopeful for an inspirational origin story for Jace Fox, and while I understand it is Mr. Ridley’s story, it is disappointing for me. Especially given so many real life inspirational stories out there. The story about The Batman has always been about motivation. This is why the initial stories in The Next Batman were soulless. They might have had writing plots, art, but no heart.

An ironic misperception that I read too often is that Bruce Wayne Batman lacked “empathy.” I couldn’t imagine anything less true. The Bruce Wayne character gave everything he could to protect others and humanity, and even in the Death Metal Elseworlds, he fought past death, losing his arm, and being mutilated. For others.

Heroism inspired by criminal guilt and heroism inspired to protect others are totally different value sets. You can’t guilt someone to have the primary powers of The Batman, which is his mind, his calculating thinking, his preparedness, and his role as a one-man army fighting to stop crime’s war against the innocent. The Batman’s empathy for the innocent was not a lack of heart even for criminals, and for 80+ years, we saw that character try to reform even the worst criminals. Despite everything, the psychopathic Joker was not killed. The concept of The Batman is based on those foundational values.

I believe the intent of Mr. Ridley’s storyline origin is that criminal experience and guilt makes you more empathetic and urderstanding to them. If that was what was necessary to be empathetic to individuals choosing a path of crime, then crime would have conquered our Earth ages ago. The reality is that we see today is that we don’t need to be criminals, to offer empathy for both innocents and criminals, to protect innocents, to protect the right of criminals to justice, and to want to urge criminals to reform. We simply do not need to be a criminal to understand this. So from that perspective, I just find the origin to be at odds with reality and human nature.

Interesting thoughts. I’m still quite enjoying Tim/Jace’s story, as it gives him a redemption arc, and I’m a big fan of those. I don’t know where DC is going with Tim/Jace or the Fox family long term, but I think it would be a bit dull if they had the same motivations and experiences as Bruce.

I really, really, really wanted to like this and I’m really really not.
I understand that, as Jace is the focus, we’re going to see things partially though his eyes, but I’m really not a fan of the half explained 180 they did with Montoya’s attitude and behavior. “I lost my previous partner” isn’t really a great explanation for somebody who was a mask herself to suddenly flip to being a “I follow the rules, even when they’re the wrong thing”. She’s always had a strong sense of justice, so seeing her “disappear” things for the rich and powerful doesn’t sit right with me.
Also not a fan of Tam being used as a passive object to further the storyline of the men around her. Or of the shift in Lucius’ attitude and behavior.
Or what Jace said about how the cover up of his “accident” was a bigger crime than…the taking of another life.