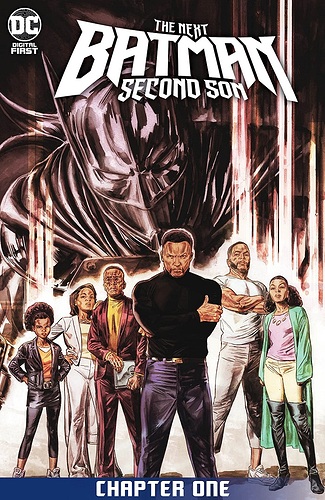 Tim Fox may not be Batman yet, but he’s still fighting for what he believes is right in this first look at The Next Batman: Second Son #1.

If you’re looking for full-body chills, then this week’s #sneak-peek is for you

To get the full glory of the next generation of Batman as launched by John Ridley (Writer), Tony Akins (Penciller), Ryan Benjamin (Breakdowns), Mark Morales (Inker), Rex Lokus (Colorist), and Deron Bennett (Letterer), then run, don’t walk, to today’s News to check out the full article and sneak peek pages of The Next Batman: Second Son #1 before it hits the Digital stands on Tuesday, February 23rd!

Do you agree John Ridley’s experience as a filmmaker informs the storytelling of Second Son? Are you as ready as we are to learn what’s up with that computer?

Cool stuff! It’s funny, I recently read all the issues that had Tim Fox in it for our World of Bats reading, and it’s interesting how while the circumstances are different, his motivation of stopping the rich from exploiting those they feel are their “lessers” is something that the two share.

If anyone is curious about the issues he was in before this, here’s a link to that World of Bats reading we did for the club to check out.

[World of Bats] The Next Batman Origins + The Lazarus Affair! Fan Club Discussions

Hello and welcome to another installment of the World of Bats, the Batman Book Club! [wob next bat laz affair] This week we’re going to cover some older material to get ready for an upcoming event! On January 5th is the start of the two month event “Future State,” which will show our heroes taking on new roles in a possible future, and perhaps one of the most anticipated series from it is “The Next Batman,” written by Academy award winner John Ridley! As you might expect, this series deals wi…

This is very interesting…

No problem – always happy to share some fun Batman stories and plug the club I help run.

Interested to see what John Ridley does with this.

Fan fiction by an Oscar winner? No thanks DC.