Just read Event Leviathan #2 where Batman officially forms his ‘team of detectives’ and I have questions. Namely: when was Green Arrow retconned into being a detective at all, let alone one of the best in the DCU? I’ve been reading Ollie’s adventures since Grell’s series (plus his Hard Traveling Hero stories) and while he’s one of my favourite characters I don’t think he’s ever been more than a competent investigator.

Kate Spencer is a lawyer turned vigilante (Manhunter), so I guess she has a skill set that might translate into detective work, but again I don’t think she’s one of the best around. And then there’s Plastic Man. I don’t know that character very well, but I’ve mostly seen him used as comic relief (as he is in this issue) whereas Ralph Dibny is an actual detective with stretchy powers. But maybe I’m wrong and Plas has a long career as a private detective I just don’t know about.

Don’t get me wrong, I’m a big fan of every character Bendis has pulled together for this team – I just don’t like the idea that them being detectives is the reason they’re there. Besides Lois Lane, who is a detective in everything but job title, this is more a team of street level crime fighters than anything else. If it’s great detectives Bruce wants, he really needs to call up Elongated Man and Martian Manhunter and Detective Chimp. 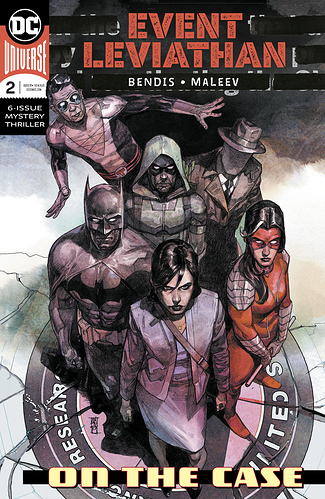 I never thought of Vic Sage as a detective.

Plastic Man has gone undercover for Batman but he’s not a detective. Bendis is conflating him with Elongated Man. I e loved Bendis’s DC stuff and I’m loving Event Leviathan but this is one thing that drives me up a wall as a Ralph Dibny fan.

GA has been a competent investigator. Read some of the older World’s Finest and Action Comics, pre COIE. He’s not in Batman’s league, but who is? The comic is an ugly mess, I’m more upset by the art than the lame plot. It’s so dark and muddied you can’t tell who’s who half the time. The story is not nearly as good as they premise. Shame.

Bendis knows what he’s doing. He’s said there’s a reason Plastic Man is here instead of Elongated Man, and it will become clear.

I’ve been reading comics since the 80s and I just now (#event-leviathan-2019 #5) figured out that Plastic Man and Elongated Man are two different people.