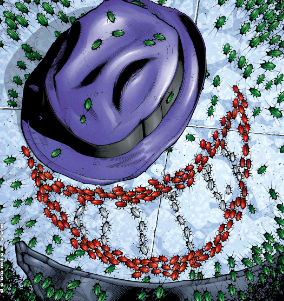 The Renegade Robins Club invites you to another big Bat-Event: the Joker epic Last Laugh! (Yes, the Dick Grayson Fan Club covered the six core issues almost two years ago, but we’re doing the whole thing: over 30 issues of madness!) Join us over the next two months as we see what the Clown Prince of Crime is truly capable of once he discovers that he’s dying of a brain tumor!

Here is the schedule:

Have you read Last Laugh?

Thanks for joining us, @RenegadeRobinsClub! Our regular Steph and Damian adventures will return this spring!

This is gonna be hardcore. I’ll be very curious to see what people think of this event. I’m not a huge fan, because I really dislike the Joker, but there’s a lot of very cool Batfam content.

Sorry about the lack of recent updates, but we’ve had a few Spoiler spottings so far:

I’ve read the first couple issues of the event (going to try and catch up) and I am questioning just how these books fit in the event and where. Like, was Match in the first issue of Last Laugh at all? And Orion is placed shortly after the first issue, but the editor’s note says that what happened before this issue happened in Last Laugh #2.

This isn’t on you Knox, by the way, I’m thinking this was listed in chronological order of when issues released, even if it doesn’t quite make sense for the story.

My understanding is that the tie-ins are mostly pretty independent of the main storyline. At least, that’s my conclusion after listening to Dixon in interview.

Glad to see the Secret Files in the list, though I’ve heard it should be read first! (Again, from those interviews)

Yeah, I went with DCUI order, even if I was skeptical of that order.

Reading it now, and holy cats, the Slab is dark. Like, I get that it’s nearly impossible to really contain these murderous super powered villains, but…

I know that you can’t really kill villains. You just have to copy them. But it feels like this is bad for the jailers, too - actually, I think that Dixon and Beatty are making that point, showing them getting callous and careless.

Also, I TOTALLY get why Dixon and Beatty are cranky that DC hasn’t collected this with the main event. It’s pretty darn key to the story!

The other shorts aren’t great, though I love the profiles and pinups (Take note, DC, this is how you should do a Secret Files! Profiles and pinups!). But man, the opening story. It’s essential to the storyline!

Also, the shorts felt a LOT like the shorts from the Joker 80th anniversary giant. Very interesting, even though separated by 2 decades.

I just looked up some other reading orders, and the first one I found in the aptly named comicbookreadingorders.com have a order that from the couple issues I’ve read so far makes a bit more sense.

Anything that doesn’t put the Secret Files first seems pretty sus to me!

Just read that Secret Files and I have to agree, that thing really should be first. I mean, the story hinges on Joker going all out because he has brain cancer, and we only see that moment in the Secret Files.

Though honestly, I think that reveals a bigger problem. Maybe – just maybe – a big moment like Joker discovering he has a brain tumor and has less than a year to live, should be…you know…in the main story and not in a one-shot that many fans might consider a throwaway.

Scott Beatty, co-writer of the series, has a TON of information about the series and its creation on his blog! Here’s an interview with Beatty and Dixon where Dixon explains why they pushed the Secret Files as an integral part of the story: Dialogue to Follow...: Behind-the-Scenes of JOKER: LAST LAUGH!

To goose sales, Chuck and I pitched that the SF book come out first and include the opening chapter of LL to make it absolutely integral to the story. We also loaded it with lots of value-added material, including profile pages for villains debuting in the series.

CHUCK: I remember telling an editor I shall not name that LL Secret Files HAD to be solicited as an integral part of the limited series not just a standalone. Retailers and readers needed to know that it was vital they pick up the Secret Files for the whole story. I suggested something like LAST LAUGH STARTS HERE! in the solicitation copy and on the cover. His reply (I will never forget this): “Well, we don’t want to make this more of a shameless money grab than it already is.” I reminded him that DC Comics was a publishing BUSINESS and the idea was to make a profit. I also pointed out that readers would probably want to read the whole story.

Beatty also posted about a lot of the stuff that got changed from this event here: Dialogue to Follow...: THE PITCH FILE: DC Comics Stories Scott Beatty and Chuck Dixon Almost Got to Write!

Kinda sad that none of this stuff never actually happened with this creative team. It would have been pretty cool!

And Beatty has a truly massive post that’s like a director’s commentary on the whole series here! Dialogue to Follow...: BEHIND-THE-PANELS: Every Gag, Homage, and Hidden Reference in JOKER: LAST LAUGH Revealed!

As we enter Week 7, Stephanie shows up again in Wonder Woman #175 (kinda) and Robin #95! Also, Tim might just find himself on Killer Croc’s menu!

Croc says nom nom! That Wonder Woman issue was incredibly confusing to me when I was updating the wiki! It’s kinda funny that this is the biggest Batman event since Cataclysm that Steph plays a part in.

We’re in the final week! Will the Joker finally die?

At least for a while?

Dixon and Beatty wanted him to. But DC refused it. Cause…Joker makes too much money. I am curious for those who have read/are rereading this event - would you say it’s more remembered than things like Emperor Joker? Where does it fall in the “big Joker storylines” for you?