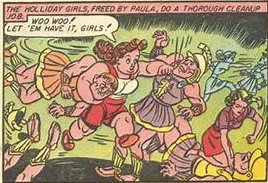 Created by William Moulton Marston and H.G Peters in 1942, Etta would first appear in Sensation Comics #2, the third Wonder Woman story ever printed. Therin, she would be sought out by Wonder Woman to aid her in Dianas first encounter with the dreaded Doctor Poison.

The two were established to have met in the hospital. An event which would be expanded upon by Marston and Peters in the Wonder Woman newspaper strip wherin Etta Candy at deaths door would be Diagnosed by Diana to have an affliction where her body burned burned through its blood sugar at shocking speeds, requiring her to take a regular prescription of candy for her own health.

Etta Candy who at the time was a student at Holliday colledge, would gleefully agree to aid Wonder Woman. With a hundred of her fellow classmates who shared Ettas passion for kicking as and punching nazis.

Afterwards, Etta would go on to join Diana on numerous adventures. Be it traveling to the astral plane to battle armies. Joining Wonder Woman on a trip to Europe to rescue those trapped in nazi death camps. Traveling to the planet Mars to whallop the god of war. To aiding Wonder Woman against supervillains such as Doctor Psycho and Giganta.

A character who served to show the power and ability of the regular woman. A loud and proud Texan who led her own Beeta Lamda sorority and learn the ways of the Amazons.

This golden age interpretation of Etta would be talented in countless sports. Knowledgable about a wide range of subjects. An expert cowgirl. And in an era where Amazonian super strength was something that could be learned, Etta would go on to possess might comparable to Wonder Woman herself.

The character would go from being Wonder Womans most trusted ally in the fight for love and peace to a more diminished role in later years.

Under Robert Kanigher she would become a regular college student who never adventuring, would occasionally be visited by Wonder Woman who would share tales of great events in her life.

With Kanighers run lasting nearly two decades, this served to diminish Ettas role in Wonder Womans stories to the point that she would go unused for years until 1977 wherin Martin Pasko in a run inspired by the Wonder Woman tv show, would include Etta in a series of stories that took place on Earth-2. Though in this iteration she would be Steve Trevors secretary, Having no background of crime fighting alongside Diana as she did in the golden age.

Etta would vanish alongside Wonder Womans Earth-2 adventures until 1980 when Gerry Conway ‘softbooted’ Earth-1 Wonder Woman, having her working at the Pentagon in a modern day (of the time) reinterpretation of that Earth-2/season one of the Wonder Woman tv show status quo.
Thus Etta Candy was once again a secretary. Though she would also be Dianas roomate. The two of them sharing a flat, with Etta becoming Dianas closest friend.

Post crisis would come and Etta would be introduced by George Perez in 1986 as a career military officer in the United States Airforce. With this take on Etta being more distant from Diana than past iterations, she would know Diana through their shared connection to Steve. With the post crisis iteration of Etta going on to marry Steve Trevor.

Eventually becoming an intelligence officer, she would serve as a liason to the Department of Metahuman Affairs wherin she would go on a wild space adventure with Wonder Woman.

New 52 would herald changes in the character with her changing ethnicity, and becoming wire thin. Though once again she would serve as Steve Trevors secretary with them both working for Argus. A role she would be sporadically seen in.

Later, in Rebirth this would be tweaked yet again. With Etta regaining a more classic build. And a change in positions with Etta taking on a more commanding role. With Steve serving as her subordinate instead.

Etta Candy has seen a great deal of changes over the decades. With Etta being around almost as long as Wonder Woman and seeing a wild variety of changes to her over time.

Adaptions have gone in numerous directions with her from the tv show from the 70s to the Wonder Woman film from 2017.

With this year being the anniversary for Wonder Woman lets also celebrate the amazing Etta Candy.

I remember really liking Etta in the Legend of Wonder Woman series (and the movie of course).

What’s “The Legend of Wonder Woman”?

Written by Renae De Liz, Legend of Wonder Woman was a digital first series from 2016-2017 which was collected into a trade. Its considered by many to be one of the best Wonder Woman stories ever.

The other iterations of Etta never really struck me as her. The Legend of Wonder Woman being the exception as they took the core character and simply brought out her personality in a way the original comics didn’t but was extremely faithful to the character.

I was sad that Etta’s comics lost out in the Round Robin voting, but I am holding on to a slim hope that they will bring that idea out again. It sounded amazing!

Golden Age Etta was amazing. It is a shame that her role would be diminished as the years go by.

More or less a modernization of her golden age origin, with her leaving the island amidst World War 2 in order to save the planet from a grave threat. Among other things it has her meeting and teaming up with Etta Candy.

Thanks for that info. Any idea if the book is still around?

I just linked to it and described how to find it?
Oh if you mean in physical form yes, it can be found on Amazon

Yeah, I meant physical; thanks