Just wanted to start reading some stuff that that has earth-x in the story line. Anyone give me a good starting point for them? Thanks

This link may help 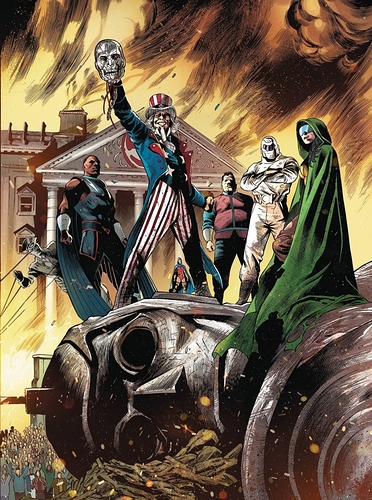 Upon discovering a parallel world where the Nazis were winning World War II, Uncle Sam recruited a group of golden age heroes called the Freedom Fighters to travel to that Earth and save its people. Over the years, various incarnations of the Freedom...

I really like Earth-X. It’s the Quality Comics superheroes in the darkest of all timelines.

In All-Star Squadron, Roy Thomas used a lot of the Quality heroes in his Earth-Two stories and then realized that he had to figure out how to get them on Earth-X for continuity’s sake. He does so in All-Star Squadron #50. I call it the Harrowing of Earth-Two.

Grant Morrison did his Earth-X story in The Multiversity: Mastermen, which I thought was pretty great.

Those would be my suggestions on where to start.

Thanks for the leads folks. Greatly appreciated, at least it gives me a starting point.