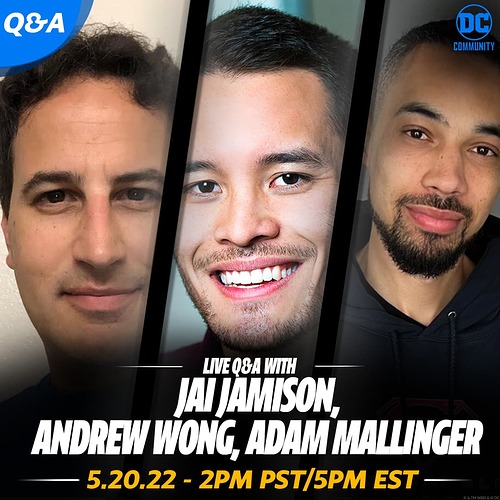 Join the Writers of EARTH-PRIME: SUPERMAN & LOIS #2 Jai Jamison, Andrew Wong, and Adam Mallinger next Friday (5/20) at 2pm PT for a live Earth Prime Q&A! the creative minds behind The CW’s hottest DC super hero shows have brought their talents and the characters to comic books in an awesome crossover event! Drop your questions in the thread below, and join us next week for a peek behind the scenes with Jai, Andrew, and Adam.

Remember: please limit your questions to just 1 per user, so everyone has a chance to get a response in the limited time we have!

This is an awesome opportunity - thanks so much for doing this! How did the choices for who handled what in the issues and the ongoing storyline get made in the planning process?

I have been enjoying these comics, as I have also enjoyed the shows. Now that a few of the shows are canceled, is there talk of maybe expanding this out of an event and into an ongoing series?

When writing Batwoman and the Legnds issue were you aware of their upcoming cancellation, and if so did that effect their stories, or will it effect the ones in the future?

(Spoilers for those that don’t want to know)

Hello,
As revealed for #6
Why have Magog as the big bad for this crossover event?

On the show Superman and Lois, there seems to be a sort of binary created where Jordan is the “Kryptonian one” and Jonathan is the “human one” even though both boys are technically the “half alien sons of Superman” regardless of who may or may not have powers. Are you able to discuss how you view the real life allegory of people who come from mixed backgrounds and how you think about it when it comes to the boys? Finally, given there has been a theme where media has been examining intergenerational trauma through speculative fiction with movies like “Encanto”, “Turning Red”, and, “Everything Everywhere All at Once” do you have plans to explore intergenerational trauma even more than you already have.

Hello and thank you for taking the time to answer our questions.

I thought the Superman & Lois issue was fantastic. Not only does it build on what we’ve been watching on the big screen, it gives some interesting backstory as well, and the art by Tom Grummet is great. Thank you for your hard work!

My question pertains to the last story. When Superman is portrayed as bad, it is often explained by ways of a different upbringing or traumatic life experience. This usually gets my thought juices flowing. While the Kent’s values and their life on the farm no doubt have a huge hand in shaping Clark into who he is, I always felt like there has to be an inherent amount of good in him for all that to take. What are your thoughts on the ol’ nature vs. nurture question when it comes to Superman, and how did they inform your writing of the story?

I absolutely loved the Lois and Clark anniversary story in the comic! Thanks so much for giving us that story. That is the exact sort of Lois and Clark fluff that many people love about this show. Do you have any plans to do more comics with more Lois and Clark centered stories? Have the writers considered incorporating more of these sort of soft Lois and Clark moments on the show similar to the date night in the barn 1x04 and the season one flashback episode in 1x11?

What does writing for comics allow you to do that writing for television doesn’t? With no concerns about sets, actors, special effects or production budgets how much did you have to adjust your mindset to writing in a world where anything/everything is possible?

This is such a cool opportunity, thank you. Superman and Lois is such a unique show in so many respects. One of the most special things about it is that it revolves around a strong marriage which feels like such a refreshing rarity in today’s entertainment. I would put Superman and Lois up there with the likes of Friday Night Lights, Outlander, This Is Us in terms of showcasing marriage in a refreshing way. There have been times recently when it has felt a bit as though the marriage between Lois and Clark has not really gotten the focus it maybe should in the overall narrative. It’s obviously a tough balance because I understand the desire to showcase villains, action etc but I would be remiss if I didn’t admit that I’ve longed for more consistent sincere content for the title couple even within those dramatic plot moments! Given the title of the show is literally Superman and Lois….how do you work as writers to make sure you are keeping the marriage in focus and prioritized even with all the other exciting plots constantly swirling around you?

Thanks for doing this! Big fan of the Superman & Lois (S&L) show and really enjoyed their issue (especially the Tom Grummett artwork) of the comics event! The anniversary story was so well done.

That said, the apparent dig taken at Man of Steel (MoS) in the second story was distracting to me and kind of took away from the overall issue. It certainly seemed like a mirror of the “maybe” line from that movie, but I’d argue that the two situations were very different. In one, young Clark saved one witness at lightning quick speed, while in the other, he saved a bus full of people apparently without the aid of super speed. It’s a lot easier to keep the secret quiet in the first scenario than in the second.

I really appreciate both S&L and MoS, so it’s a bit deflating to see one diss the other — especially when a lot of fans work hard to spread the word that both the DCEU and S&L Supermen are great and that fans don’t have to choose!

Sorry if I’m blowing it out of proportion. Again, otherwise enjoyed the issue a lot! I did like seeing Clark’s reporter side in the second story — I’d love to see that explored more on the show. Also — the show really is great! Love how it combines elements of the comics and the Reeve and Cavill films with its own ingredients to make something new! Have a good weekend!

Welcome to the community, and thanks for bein’ here!

Welcome to the DC Community! Glad you could make this Q&A!

How did the choices for who handled what in the issues and the ongoing storyline get made in the planning process?

JJ: It was overall very collaborative. Workshopping each idea and story the way we might in the writer’s room. And then going off to tackle our respective stories. We had each other’s backs in terms of edits and spot checking. (And yes, I was very keen to tackle the Main Man in this book…I made Andrew and Adam refer to me as “The Main Man” for that section of writing the book because I am very much a method writer. I also ate a lot of shrimp.)

AM: It was mostly availability! Jai and Andrew were writing 204’s script just as our deadlines were coming up. So I went ahead and wrote the scripts for the two backup stories just to get our editor going, and then I went off to write 205 while they divided responsibilities on the script for the lead story. But we figured out the stories as a group.

AW: It also worked out well because Adam had a very strong personal connection to the backups, particularly the “Father’s Day” story which he dedicated to his dad. As for the lead, I was excited to dive in more to the early days of Lois and Clark’s relationship, while Jai was eager to explore Lois’ time as a reporter and Superman’s space battle with Lobo.

Now that a few of the shows are canceled, is there talk of maybe expanding this out of an event and into an ongoing series?

AM: No one’s said anything to me about doing more SUPERMAN & LOIS comics. I can’t speak for Jai and Andrew, but I’m absolutely game if DC decides they want more from us. I’d like to think if DC sees there’s a demand for new comic series to continue the stories of the cancelled shows, that they’d explore satisfying that interest. But that’s all for the editors to decide.

That’s super detailed and awesome to hear, thank you so much! And loving the show!

When writing Batwoman and the Legnds issue were you aware of their upcoming cancellation, and if so did that effect their stories, or will it effect the ones in the future?

AM: We first started meeting about the comics last summer and all the scripts were due early on in the fall. At that point, it was the furthest thing from anyone’s mind that any of the shows would be cancelled. Given the deadlines, I don’t believe BATWOMAN or LEGENDS OF TOMORROW would have had any opportunity to change anything by the time it was confirmed they weren’t coming back on the CW.

AW: While we were unaware that Legends and Batwoman were being cancelled, their cancellation never affected our tie-in issue of Superman and Lois as our lead and backups are fairly self-contained

Why have Magog as the big bad for this crossover event?

AM: As the writers of the S&L issue, we didn’t really have much to do with that. That was likely the responsibility of Jeff Hersh and Thomas Pound from THE FLASH, who were assigned the crossover issue. There were a couple different bad guys floated before we were told that Magog was the final choice. I imagine that came out of a collaboration between them and our editor Andrew Marino.