“Dwayne McDuffie was an African American comic book and animation writer best known as one of the founders of Milestone Media, an imprint of DC Comics dedicated to promoting better stories and characterizations for minorities and for his contributions to Justice League and Justice League Unlimited, the final installment of what DC Comics fans refer to as “the DCAU”. McDuffie, who notoriously despised stereotypes and vehemently fought against them in his work, won three Eisner Award nominations for his work in comics.”

“Born Dwayne Glenn McDuffie in Detroit, Michigan, the son of Edna McDuffie Gardner, as a child he initially dreamed of becoming an astronaut and studied physics, but he was rejected from that occupation due to his 6-foot-5 stature. A voracious reader, McDuffie then dedicated his energy to writing. Following a stint as copy editor for Investment Dealer’s Digest (a business magazine) a friend’s connection helped him win an interview at Marvel Comics as an assistant editor to Bob Budiansky, where he cut his literary teeth on helping develop the company’s first superhero trading cards and writing “Damage Control”, a miniseries dealing with the insurance company that has to deal with the collateral damage of the super-hero Vs. super-villain brawls that plague the company’s fictional interpretation of New York City. When he became an editor for Marvel he submitted the spoof proposal Ninja Thrashers in response to the company’s treatment of its black characters.”

“Following freelance writing in 1990 for various Marvel, DC Comics and even Archie Comics titles, McDuffie wrote Monster In My Pocket for Harvey Comics editor Sid Jacobson, whom he cited as a mentor.”

“Following his early 1991 divorce from his first wife, Patricia D. Younger, McDuffie and three partners founded Milestone Media, in order to express a multicultural sensibility he felt comic books were lacking. With McDuffie as editor-in-chief, Milestone’s characters included the African-American Static, Icon, Hardware, the Asian-American Xombi, and the multi-ethnic superhero group the Blood Syndicate, which include black, Asian and Latino men and women. Milestone debuted its titles in 1993 through a distribution deal with DC Comics.”

“In addition to his TV animation writing credits, McDuffie also wrote for a number of direct-to-DVD animated films for Warner Brothers featuring DC Comics heroes. Among these were Justice League: Crisis On 2 Earths (2010), based on an abandoned story idea he’d originally pitched as a bridge between the end of Justice League and the beginning of Justice League Unlimited, All-Star Superman (2011) and Justice League: Doom (2012).”

“During his return to comics, McDuffie wrote the Marvel miniseries Beyond! and the Fantastic Four, and Firestorm and Justice League America for DC Comics, the latter he was unfortunately fired from following his very frank and unflattering answers to fans about the creative process. McDuffie then wrote Milestone Forever, chronicling the final adventures of the Milestone characters he’d helped create before they were added to the regular DC universe.”

“Friends, family and fans were devastated when McDuffie died on February 21, 2011, only one day after his 49th birthday, due to complications from emergency heart surgery at Providence Saint Joseph Medical Center. His younger brother, Darryl, had died only a few months earlier, while their older brother Brian had died as an infant. Truly a titanic, larger than life visionary who fought relentlessly for better quality storytelling for all, McDuffie was a talent lost too soon. He is survived by his second wife, animation-TV writer Charlotte Fullerton, and his mother. When Justice League: Doom, loosely based on Mark Waid’s Tower of Babel miniseries, was released a little more than year later it was dedicated to his memory.” 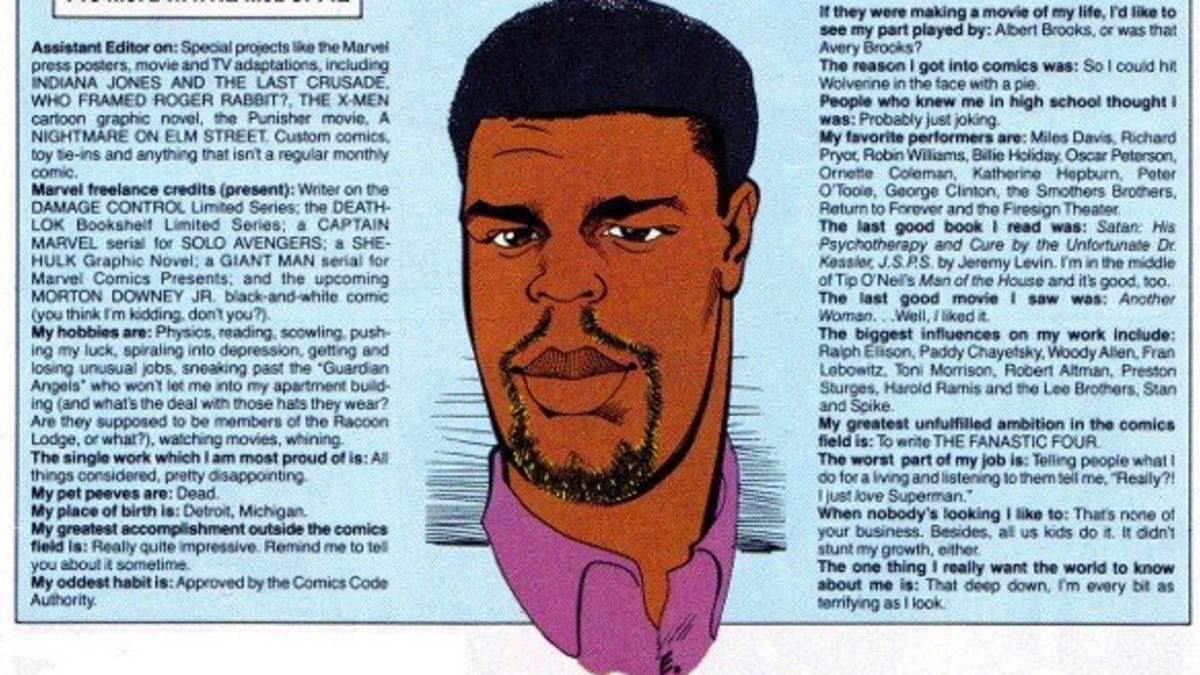 Dwayne McDuffie reached a deal for DC to publish four superhero comics titles under the Milestone Comics label — all featuring African-American superheroes, casts, and supporting characters. It was unprecedented. His heroes were a response to what was happening in black America at the time, raw and unfiltered, all about the world he lived in.

Look at those tag lines. An anti-corporate tech warrior: “A cog in the corporate machine is about to strip some gears.” A riff on Superman told from a young black girl’s perspective: “She’s got your hero right here.” A super-powered street gang: “America eats its young.” America eats its young? On the cover of a comic book — generally considered a kids medium? With no mature reader label? The comics world could barely handle it back then, and frankly it would be shocking today.

For me, living in the inner-city, in Richmond, CA, on the wrong side of the tracks, it was a total revelation. Here were heroes I could relate to. Especially the skinny little 15 yead old Virgil Hawkins and his secret identity, the electricity slinging Static, with the dope tag line: “You don’t start none, there won’e be none.”

In a sense, Static was a riff on Spider-Man. Geeky kid, great power, great responsibility, etc. In Dwayne McDuffie’s own words, “Like any other awkward 15 year-old, Virgil Hawkins worries about pocket money, getting beaten up, and drugs. But recently he’s had even more on his mind: stuff like his powers, his secret identity, and drugs. Because when innocents are in danger, and Virgil can slip away from class, the geeky youth becomes Static.” 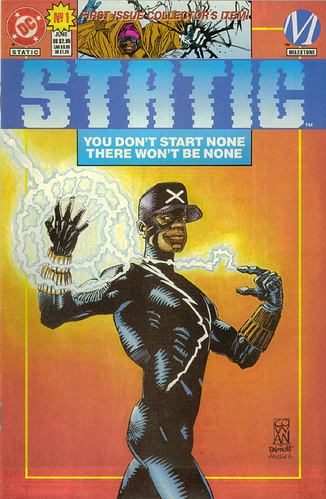 But that was only a part of it. Virgil lived in a neighborhood that I could recognize, and had problems that made sense to me. His father wasn’t a perfect and honorable man who died a tragic but inspiring death — Virgil’s dad was a bad role model, an absentee father who inspired nothing except self-doubt. I’d never seen a superhero like that before. 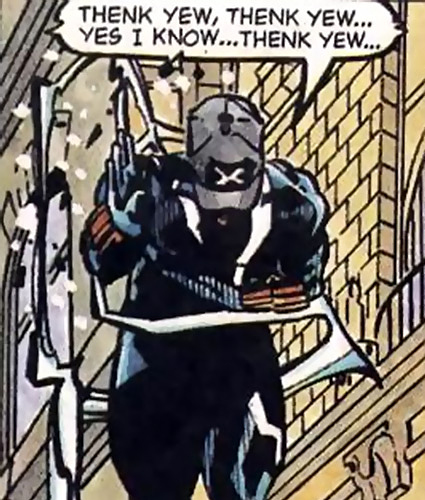 Static and the other comics in Milestone also had a profound social conscience. Addressing social issues was part of their basic DNA. Virgil rescues a friend from gay-bashing, super-powered gang-member protect neighborhoods, and corporations are framed as bad guys. Milestone in general was ahead of its time in dealing with corporate consciousness and the notion that if they existed in our world, superheroes would need to carve out space in which to retain their identity. Punching bag guys in the face isn’t enough. Dwayne McDuffie’s comics suggested that a black superhero would need to fight against the cultural current in order to be seen as a hero. Static faced that struggle and more. 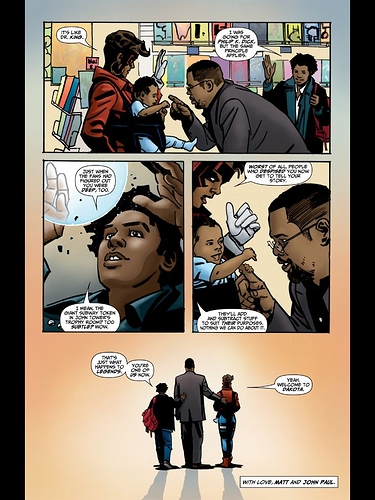 “The Dwayne McDuffie Award for Diversity in Comics is given to an American Comic Book that is committed to diversity and inclusion. It is named in honour of Dwayne McDuffie, a creator known for his work writing, editing, and producing comics and animation.” 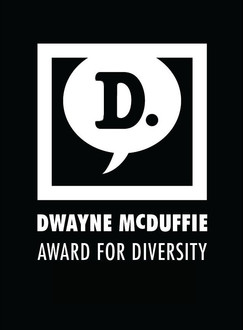 “McDuffie never stayed on one title too long, but a majority of his comics work was for Marvel and DC Comics. So our first two selections are his brief run on the Fantastic Four (#544-550) and Legends of the Dark Knight (#164-167). With the Fantastic Four, he took newlyweds Black Panther and Storm as Fantastic Four replacements while Reed and Sue Richards escaped for a second honeymoon. He told two stories that brought back the classic FF villains, The Frightful Four, who opened their membership to Ulysses Klaw.”

“McDuffie’s run on Batman: Legends of the Dark Knight built on an earlier story he wrote where he teamed Batman with the blind Lee Hyland, “Blink,” who can see through anyone’s eyes by touching them. Hyland’s special abilities are needed when Batman is on the trail of a black market for babies.”

“Our third and fourth choices pay respect to the work that McDuffie did in helping found the Milestone Comics imprint at DC Comics, featuring minority stories and heroes. Along with co-founders Denys Cowan, Michael Davis and Derek T. Dingle, McDuffie gave marginalized comics readers a host of new stories to identify with, centering a universe of super-powered beings around the fictional midwestern town of Dakota. The imprint launched eight monthly series, four mini-series and three imprint-wide crossovers.”

“McDuffie wrote or helped helped launch five of the eight series and edited many of them with his longest runs on the titles Hardware and Icon. For our list, we chose his work on Static and his work to transition the character into Static Shock, an all-ages version which eventually made it into the Saturday morning Kids’ WB! block of programming. McDuffie’s unique take on the Superman mythos with Icon also made our list for the layered storytelling and social issues discussed.”

“However, this is just the tip of the iceberg of McDuffie’s work. He’s written memorable stories for Justice League of America, Firestorm, Deathlike, The Demon, and Damage Control, to name just a few.” 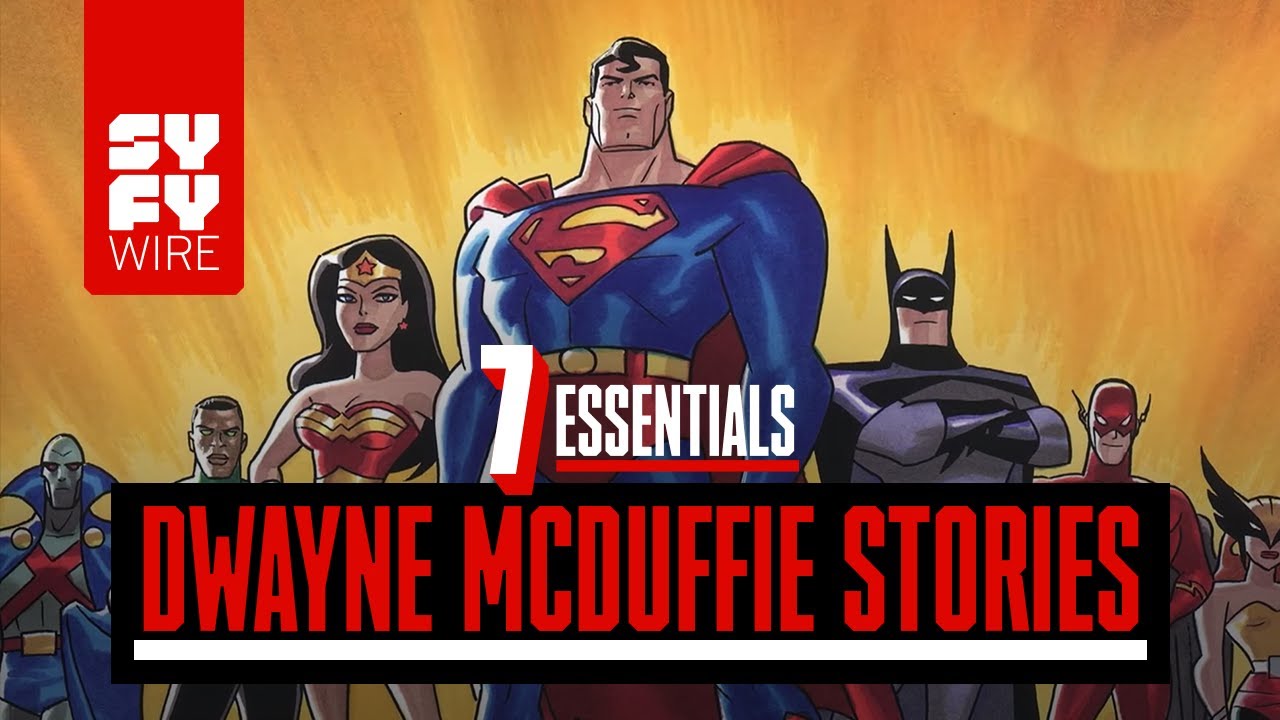 Dwayne is awesome. I miss him all the time. I never got a chance to meet him. I’ll always appreciate all the work he’s done, especially for DC.

@RandallusPrime I believe I have a Hardware #1 signed by Dwayne McDuffie and someone else. Scanned using my flatbed scanner. 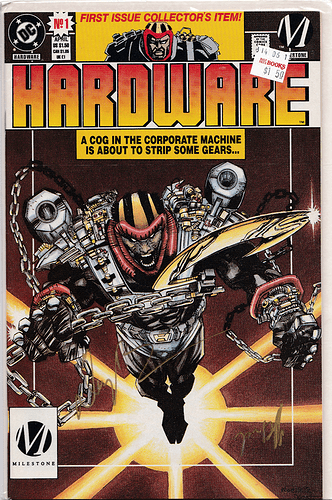 Hands down responsible for some of the greatest comics/animated episodes of all time.

His Justice League Unlimited work is a master class in storytelling.

I was planning to go to a talk with him and the other Milestone co-founders at my comic shop. Golden Apple, when the new broke that he died. I went anyway and the talk turned into one of the most touching memorials I’ve ever been to. Hundreds showed up to this little comic shop to remember him. He had a huge influence on me growing up and I think about him all the time. Thanks for posting this.

@portalman Seconding the “thanks for posting this”! Great to see all the love for an amazing creator.

McDuffie was a fantastic person and a great writer. I love his TV work and I’ve never read a bad comic by him.

First time I ever heard of Hardware, he looks cool!

Heres a pretty cool short video that highlights his genius