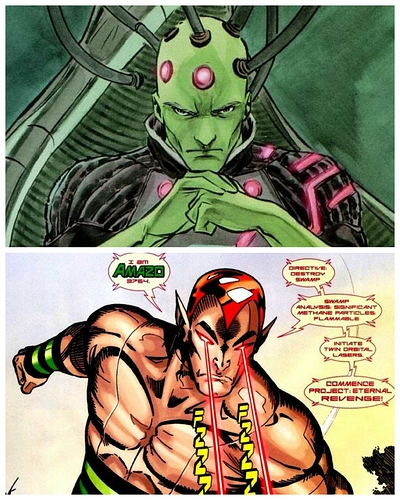 I don’t believe they’ve ever shared a panel together, but I’m curious- what would happen if Brainiac decided it wanted Amazo to be it’s new body and the Android refused? Does the Collector of Worlds reign supreme, or does the Justice League replicating killer robot stand triumphant?

Actually, wait, I originally voted brainiac, but thinking about it, I choose Amazo. If the Justice League can defeat Braniac, then…

That’s tough, but my money’s on Braniac. It’s the definition of a battle between an unstoppable force and an immovable object, but I think someone with as much knowledge as Braniac would be able to counter Amazo’s powers since they’re all rolled into only one guy.