DC has been working on a live action Lobo movie for years. I’ve been having a hard time thinking up an actor who can really portray the Main Man correctly. He’s gotta be tall, muscular…and so charismatic, people love him in spite of him genocide. Anybody have any ideas?

I was thinking Tom Hardy on stilts? Mickey Rourke? Or Alexander Skarsgård if he somehow develops a personality? Charlie Hunnam?

I really wanna know what your twisted minds think of.

In another universe, Jason Mamoa would have been an amazing Lobo.

I also think the actor who plays Tormund in Game of Thrones, Kristofer Hivju, would be an amazing Lobo.

Wyatt Russell, since his dad is too old.

Jason Mamoa has zero charisma though. I’m not even sure he can read…

I just went ooOOOOOoohhhh like a '90s sitcom audience

I will rip out his knee caps give them to my servant boy to use as coconut halves when I ride off on my invisible horse.

Mamoa will learn to appreciate the life he had when he still had kneecaps and respect the fact that he’s not a viable option to play Lobo.

Tip, never ever cut in front of mediogirl in the build your own sundae line. She’s already planned out her revenge and you ain’t gonna like it.

@biff_pow I plan to keep this thread alive forever or until I forget.

Cutting in front of me in any line will be rewarded with 3rd degree burns… both verbal and literal.

Seriously… anybody have alternative ideas for an actor?!

Is the Krypton guy not good?

Idris Elbe but then I think he could pull off anything

Pretty sure @Meliogirl is Czarnian for “she who devours your entrails and thoroughly enjoys it” based off her Momoa meet scenario. The main man would proud.

Casting Lobo is tough, always has been. Been playing this game since the movie talk started back in the 90s. There was a lot of talk about it in the letters section of his original ongoing Lobo series. Somewhere between issue 1-12.
Around the same time, Muscle and Fitness magazine had an interview with actor Andrew Bryniarski (Batman Returns, “Chip” Shreck) who was actively rallying for the role. The film didnt happen, but he later went on to play him in a fan-made “Lobo: Paramilitary Christmas” short film and killed it. So, a shout out to DC film alumni and fellow Lobo enthusiast, Andrew Bryniarski.
I think with a little Hollywood magic he could still deliver.

That said, here are some actors who I think could pull off a version of Lobo.

Jeffrey Dean Morgan-Alot of people will immediately dismiss this choice, but think about it. Take his performance as the Comedian in Watchmen, mix it with his Negan performance, remove all remorse, regret, accountability, and I feel that’s a solid, intimidating, and charismatic 'Bo.

Ryan Hurst- He played Opie on SOA and now plays Beta on Walking Dead. His real life character seems like a fun guy who is high on life. Maybe for once he can play a more fun version of the strong/violent type. He has the height and hair.

Derek Wilson-Wolf from Future Man (pictured). I can see this working very well as Wilson has great comedic sensibilities and timing, while also being capable of delivering on action and drama. His character Wolf, his real life personality, and his role on Preacher show an extremely capable actor with a lot of range. Plus he’s pretty damn tall and buff. I think he’s my number one pick. He might be a bit too attractive for Lobo but I dont know if sex appeal has ever worked against a project. 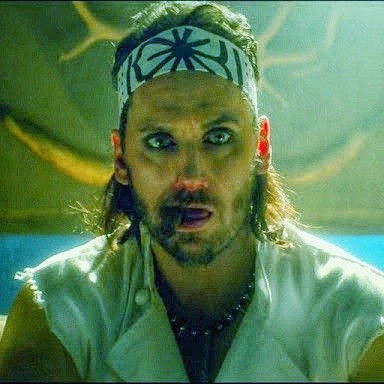