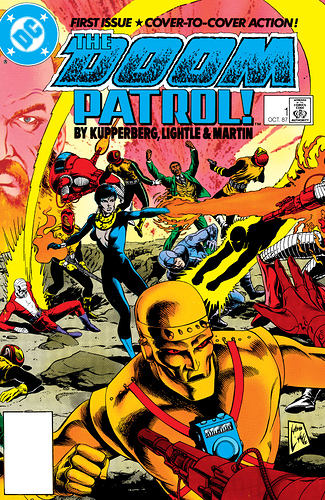 When Celsius finds the wheelchair of her late husband Niles Caulder, she begins a journey to find the supposedly dead members of the Doom Patrol and recruits Robotman and Tempest to aid her in her quest.

Welcome Doomsters to a new week of DPC! This week we’ll be delving into the misadventures of the group as they help Celsius to find the others and more!

:robotman_dp:Also as always look foreword to reading what you have to say and…Let’s Discuss!

This team made its debut in Showcase #94-97, if anyone’s interested! They also co-starred in Ambush Bug’s 1st appearance, DC Comics Presents #52!

If you read the letters pages from the Kupperberg run, the fans were VICIOUS. Twitter trolls have nothing on those people. And it’s a shame, too, because I don’t think it’s a bad comic at all. Just a little rote, in the New Teen Titans mold.

Nice! Yeah, trolls can’t do nothing about that. Thanks for the neat info @biff_pow

As far as I seen, I don’t think so. At least hasn’t been added yet

Whooooops! Sorry! I was going to check when I got on my laptop, but I forgot

Just wanted to make sure, searches don’t always hit everything on here 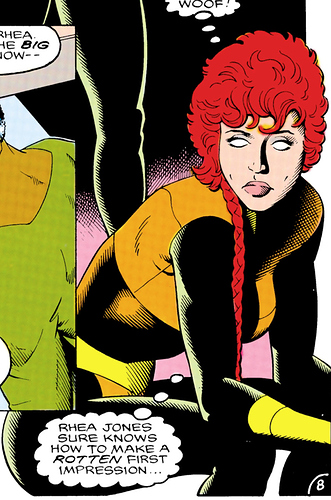 image580×876 445 KB
So, at first it seems there’s not a lot here to talk about. The stories are fine, but nothing groundbreaking or really memorable. Then, I read an article quoting Kupperberg. He said he was too young when he first wrote DP, and wasn’t really up to the task. Then he gets another shot. He says, he and the initial artist weren’t really on the same page without slamming him. But, now I think he does understand what he needs to do and he really sets out with issue #1 to transition to a real Doom Patrol. Over the course of the first few, we get Larry back and a conflict between him and Negative Woman over control of the Neg-thing. And we start getting new, more Doom Patrolly characters. We get Rhea Jones who will become an intricate part of Morrison’s early run. We get Karma who is a jerk face, but certainly fits the outsider mode. And for more on what happens to him, check on the Suicide Squad Memorial Wall in this month’s History Club (though I kinda gave it away didn’t I)? This isn’t full Doom Patrol yet, but we can see it coming.
2 Likes
ProActress April 21, 2020, 2:20am #10

Yeah, during the beginning is when not really sure how it plays out but over the course yea. And yes, that gave it away lol. Thanks for the thoughts on this :robotman_dp:

Just finished these issues, and they’re not bad. They definitely feel like they’re trying to fit in the mold of the late 80s comics that were popular at the time, like New Teen Titans and Uncanny X-Men, but there’s still at least a flavor of that weird, like the initial villain who’s name I don’t remember how to spell with a crazy Cthluhu dimension living in his chest.

Also kind of neat is that #6 in this series looks to be one of the earliest, if not the first work of artist Erik Larsen. For folks who might not know, would later be one of the original founders of Image and really make his name with the character Savage Dragon. What’s interesting is that when I looked that up to make sure, on his Wikipedia page it talked about how Erik’s arrival on the book was heavily criticized at the time, which Larsen attributed to his style being so different from Steve Lightle’s.

I love the obscure little fun facts that you provide. Always informative, and they make me sound smarter to my friends when I bust them out in conversation!

Same! And thanks for providing those cool facts @Jay_Kay! also glad your enjoying them!

And thank you, Jay! @Jay_Kay