I’m usually the kind of guy who waits for an entire story to be collected into one book and then checks it out. Does anyone know when a collected edition of “Doomsday Clock” will be released? Are any of the issues on this service?

Also, I’ve probably asked this already, but how does “Doomsday Clock” tie in to what’s going on with the main Rebirth Universe? I know about the one shot, “The Button” storyline. I’m a little fuzzy on the “Superman Reborn” story, but I think I get the jist of it. Do I really need to be up to date with everything going on before reading “Doomsday Clock”?

W/ issue #12 not coming out until December, we won’t get a full collected edition until sometime (hopefully) early next year. The first 7 issues are here, though it’s gonna be over a year before every issue is available on DCU.

While there are definitely storylines that tie into Doomsday Clock, you ultimately really only need to have read Watchmen. DC Universe: Rebirth #1 and The Button definitely help, but the story does a good job of letting you know what’s going on in the DC Universe at the time. The story’s meant to take place a year ahead of the current continuity, but given all the delays and the fact that it’s taken 2 years to come out, that’s been called into question a lot. At the end of the day, though, it’s a phenomenal series and I couldn’t recommend it more. Despite all the delays and questions surrounding its place in the DCU, I’m still eagerly awaiting the finale 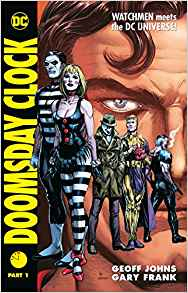 I have some of the issues, but stopped around 4 because I decided to wait for the collected edition.

I have read what’s on DCU. I think 1-7 are available

I saw this at my shop and you are correct! I’ve bought the singles as they released but after the first delay it was put on the reading backburner until they were all out…

Tho, I have been tempted to start over with couch mode here. I’m really enjoying that feature now that I can use one of my consoles with the app!

I wait for the graphic novel as well!! Here’s some information.