As I said in a previous thread, I was ready to give up on Doom Patrol because of the shortage of Rita (my favorite character) in the first two seasons, but I decided to catch up with all the season three episodes yesterday and I’m glad I did.

I also hope Larry doesn’t die. I did not think of the possibility of him being pregnant, but that would be preferable. Pardon the pun, but such an event could be a rebirth for him.

Casting of the roles has been great. I’d never heard of Michelle Gomez before, but they couldn’t have made a better choice for the role. She IS Madame Rouge! She, The Brain and Mallah all look like they jumped out of the comic books!

I’m pleased Rita is getting more of an important role this season, and I hope we see a season four (please let it be so!). Seeing her go full-on superhero would be great, and for the actress in her, it would be the ultimate in reinventing herself. And on a side note, didn’t she make a cute zombie?

The odd thing is, this may wind up being the most subdued episode this season!

That’s the thing, I’m not prepared for the next thing that will take the cake and top it

I first encountered Michelle Gomez when she played Missy, a female regeneration of The Doctor’s archenemy The Master, on Doctor Who. She was great on that, so I was really excited when I heard she had been cast as Madame Rogue! I have to say, she has been incredible in the role so far.

Meanwhile, as they were considering eating his head, Niles was about to launch into a chorus of “I Ain’t Got Nobody!”

Really liked episode 5. Rita what have you gotten yourself into? And i wonder if we will ever see Kay go up. I think that could be interesting.

Can I please confirm something? In the episode Vacay Patrol, remember the scene in which Rita melted into the planter? Is it my imagination or did she shrink a bit? Maybe we’ll see some more size changing from her soon.

Well, I’d been looking forward to the Sisterhood of Dada and I was not disappointed. It was an amazing episode over all. And I love the fact that Rita is getting to play a major role this season. I am still curious as to what is gong on with Larry. And I loved the Doctor Who reference (a bit of an in-joke, as Michelle Gomez played Missy on that show). The Fog was truly frightening. I am guessing they will face the Sisterhood again soon, and I have to think the Brotherhood of Evil will make a major appearance soon (the preview for the next episode featured Monsieur Mallah…).

The Sisterhood of Dada seem more morally complex than I expected. Maybe it’s a case of perspectives like the Underground atm seemed like bad guys if you take some scenes in isolation. Like I’m iffy on what they’re doing but kinda get their reasons why. That sorta’ thing.

His old son’s about to get a little space energy bro.

It was sweet Cy got that moment of reconciliation with his Father. Curious to see what answer he’ll come up with on his self-identity. Maybe his resolve will help him confront Roni in the end.

The ground work being build for each character’s been really good these past couple episodes.

Laura and Rita hang out. They get drunk and talk about them. Nice stuff. Fixed the time machine. Now Rita’s chance to be that world renound time travel

Larry helping his kid and dealing with a possible new one. Interesting.

Cyborg dealing with his identity crisis. Nice moments with him and his pops and Aproxoment man got to him.

Jane dealing with under ground changes. Seems like Jay is growing or maybe healing and the others are worried if she heals what’s there purpose.

The sisterhood was cool. Very interesting villains this season. Looking forward to more.

Will Rita loose her memory? What will happen with Cliffs brain? Why are we? All this and more Same Doom Time Same Doom Channel

Went to New York Comic Con and they had an amazing Doom Patrol tent with Danny the ambulance in front of it: 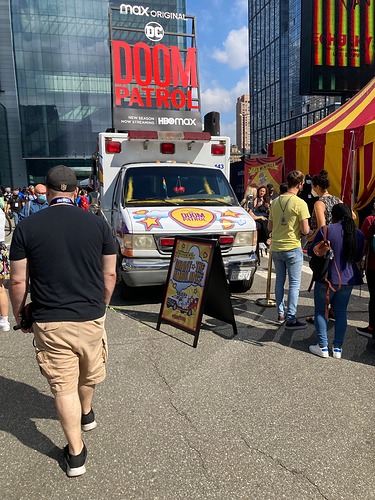 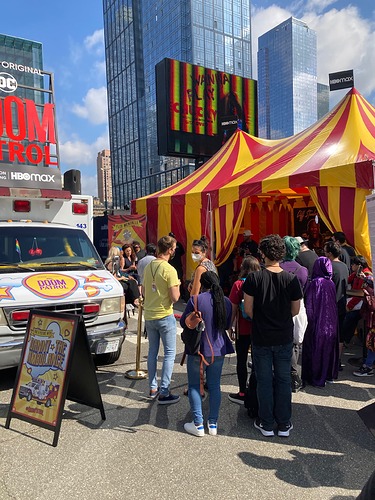 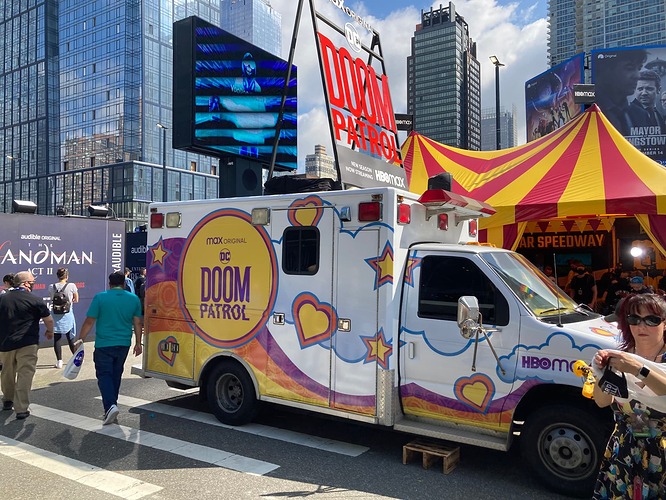 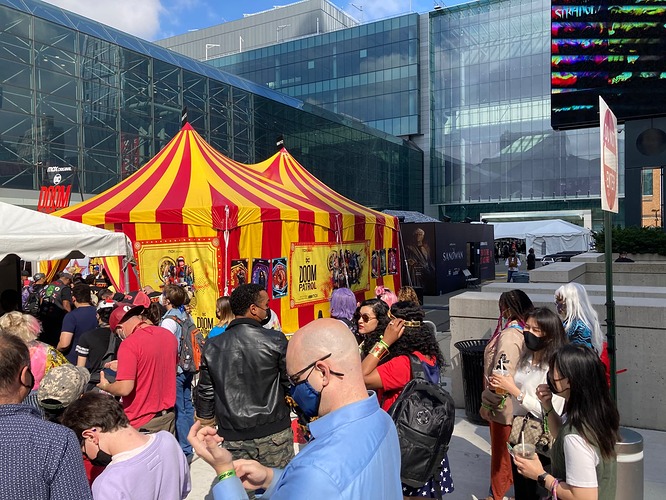 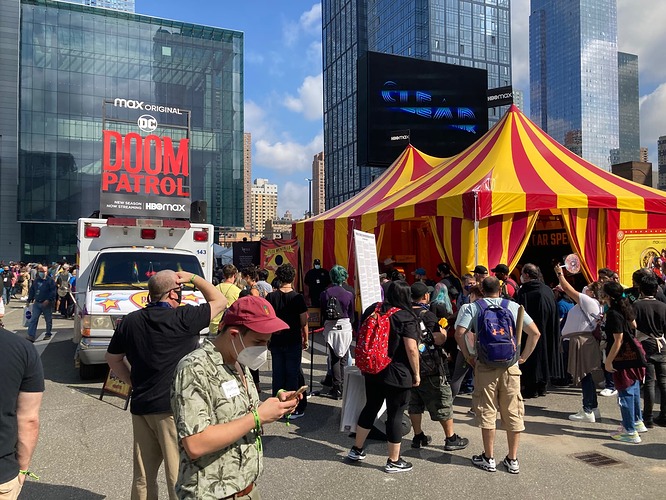 I saw that on Instagram. What was heartbreaking was that I had just decided to attend LA Comic Con instead, and April Bowlby was there in New York!

Were you lucky enough to meet her?

April Bowlby posted pictures of the event to her Instagram. It really makes me wish I live in NYC. Michelle Gomez was there too.

This is partly why I’ve been sad lately. I could have had a chance to meet her, and I chose to attend LA Comic Con instead. I’ve gotten a look at their lineup and they really don’t have much. I doubt she’ll be there, but meeting April Bowlby and getting her autograph would have meant so much to me. Am I being silly?

Oh no, I don’t think that’s silly at all. I think most of us here would like to meet April Bowlby and get her autograph.

I didn’t get to go to the tent because the line was long, but when I zoomed into the pictures I see Gomez, Bowlby and Wade were doing an interview. They were right there!

If we get a season four, what would you like to see?

Another good episode. Got to meet the sisterhood of dada. Cliffs money problems are interesting. Loved everything with with Jane and Kay. Looking foward to seeing where that goes. Keep it coming!

Although pausing the screen, FuzzyRimJob42’s message to Cliff makes me think his ‘friend’ is The Brain. Maybe it’s Monsieur Mallah incognito trying to get a body for The Brain with Niles’s schematics. We haven’t seen them in the present I don’t think, so who knows.

Maybe they did replicate the time machine.

Was Niles’s note the result of her actions with them

Does it involve Malcolm dying or something

I don’t remember seeing him in the present. - - Extra spoilery theory → I’m fairly certain that the guy in the after-life who recognized Rita was Malcolm

He called her Bendy like The Sisterhood has and said “never let them see you sweat” in episode 3 just like Malcolm did in episode 6.

Wonder if the endgame for Jane’s overall series arc would be for Kate to become the main personality permanently. Given how everyone overcame the past of her Father and now this episode establishing Kate growing up I could see that route happening down the line sooner or later.

Glad Larry was able to forgive himself

Acknowledging his mistakes, torturing himself for decades, but still loving his family. Might not have ended in a ‘healthy-ish’ relationship like Cliff and his daughter but at least he was able to express his decades of feelings to his son.

It’s pretty interesting how Rita was able to naturally use her powers after all that baggage that plagued her mind was swept away while time-travelling. I didn’t even think about that happening last episode. Really cool ! Wonder if she’ll be able to use it more naturally like a muscle when she comes back.

It’d be a crazy change for Cy to go through the skin transplant stuff. Could go either way but I think he’ll stay Cyborg and maybe gain a new perspective or new mantra on his life.