I’m taking time out of my day because I consider this to be an important thing to put out there.
I know a lot of fans have subscribed to the DCU streaming service for shows like ‘Titans’ or ‘Young Justice’ and while it is very understandable, at some point ‘Doom Patrol’ was released, and with it’s release came joy, a show with a powerful message about flawed individuals who could not only rise up to the challenge, but remind us of how relatable their experiences and emotions are.
I for one, fell in LOVE with Doom Patrol. It quickly became one of my favorite shows in all of TV History. The empathy, the weirdness, the human aspect of the show, are what make it so special and important in our day and age.
So now to the point of my message.
I’m trying to gather a percentage of people who feel the same way about the show and wish to see it renewed.
I want us to band together to let DC Universe know that if they are to cancel Doom Patrol, we will cancel our subscriptions of DCU and not return for future releases or shows.
It sounds like a drastic measure, but if enough of us fulfill that pledge, it will be less likely for DCU to cancel the show.
Let’s support our favorite band of misfits, let’s remind DC that a Good Quality show doesn’t need of mainstream popularity to develop a fandom and demand.

Thank you for your magnificent time and dedication to the show by reading this message. 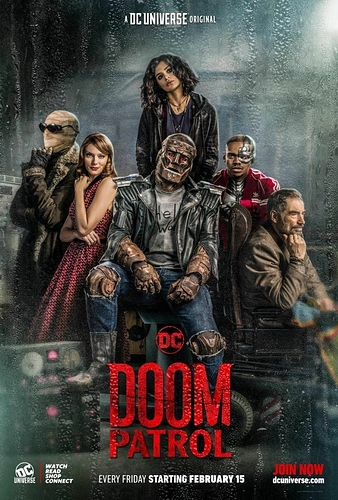 Doom Patrol is the best DC adaptation (including movies) ever done. I’d be frustrated beyond belief if season 2 doesn’t happen. But, in the modern age of tv, other networks could potentially pick it up later on. It was announced that DP has a panel at Comicon so in hoping for an announcement there.

For me it’s more like, if I’m paying for a DC service, it’s supposed to be more fan friendly than let’s say Netflix.
What I mean by this is, you can’t release a show of the magnitude and quality of Doom Patrol, for fans to fall in love with. And then just cancel it for the sake of some corporate decisions they might end up making.
It doesn’t work like that.
It feels like we’re being done a disservice, and not only for us, but for the cast and crew of the show.
Why should I continue subscribed when they have proven that anything we see here is not even reliable safe for us to dig into.
What’s the point of releasing shows for one season. Make limited shows like HBO does, don’t play with the psyche of fans like that.
If we’re done dirty like that again (i.e Swamp Thing cancellation) I honestly have no more reason to continue subscribed to a service that has only wronged me.
Titans will eventually be on Netflix and YJ will most definitively be up for download somewhere else.
If you can cater to your fanbase then you’re doomed.

I think it’s likely well see an announcement about DP season 2 in the next free months, probably SDCC.

Leaving a service because they don’t renew a show. Go ahead, if that works for you.

DP was a salable show. Hence my view that it will get a second season. Swamp Thing has not been sold yet, and I doubt it will be.

I don’t want DCU to invest in a second season of a show cost 50+ million if it’s not salable outside the US. I glad we got DP & YJ S3. I hope the make enough to warrant another season. If they don’t, I understand why they wouldn’t.

They have experimented (and still are with HQ animated & Stargirl) when you experiment, some work, some don’t. It looks mote and more likely that Doom Patrol worked and they have good reasons to do a second season. Swamp Thing didn’t, so it didn’t get a second season.

I’m around for the long haul at DCU, DP season 2 or not. Although I think it likely they will have a second season.

I’m tired of these threads. I’m not cancelling if they decide not to renew a couple of shows.

After reading certain things about Doom Patrol such as the recent release of People Like Us and the fact that there will be a discussion of the show at San Diego Comic Con I have a pretty good feeling about a season two.

Hi @Aruteru, you’re among a lot of friends here. We’re hardcore Doom Patrol fans (and have been celebrating Pride all month long- it’s a cool place to be a DC misfit these days). I’m sorry that what happened with Swamp Thing (I think?) made you feel like there was danger for a show (Doom Patrol) that’s impacted not just us personally, but media in general so greatly. We have not given any indication that Doom Patrol is in danger.

I hope that you stick around. It’s easy to get caught up in the fear that permeates small press and public concern. While us moderators don’t have access ALL THE WAY TO THE TOP! of Warner Bros., we are able to give you a fair amount of intel straight from the blue horse’s mouth.

Keep your eye on Watchtower for future official announcements about our programming. And welcome to it

I think Doom Patrol is likely to get renewed, but if it doesn’t, I wouldn’t cancel my subscription over it. There’s so much more that this app offers that I’m really attracted to. These include the comic library, the animated shows and movies, the community, DC Daily, and of course the great originals that would still be here even if Doom Patrol gets cancelled (which, again, I don’t think there’s any indication of). I would understand everyone’s frustration if it gets cancelled, but would look for the reasons behind the decision before getting upset about it.

I’m very eager for the SDCC announcements to be made soon.

I wouldn’t cancel, but I would cry and make everyone very uncomfortable. YOU’VE BEEN WARNED, DC

Who watches the Watchtower? We do, cuz good stuff is coming out of there

I’ll be very upset if Doom Patrol is cancelled, but I still don’t think that’s enough to make me cancel (even after Swamp Thing). There’s still the future to be excited for, with Young Justice coming back and at the very least Titans season 2, Stargirl, and Harley Quinn, as well as the amount of content already on the service, from an extensive comics library to various media, new and old (plus this Community

There have been some bumps, but it’s gonna take a whole lot to make me cancel.

I don’t understand where these rumors about Doom Patrol got started and I’m having an even bigger issue with how it’s perpetuated.

Superby, the rumors are coming from facebook pages, reddits, and probably tweets (not a twitter user so idk how that works). But basically its the clickbait rumor mill, and its going around because it was so good and it hasnt been renewed yet and people are very used to shows getting renewed before or a few weeks after its season finale.

And there are ALOT of rumors going around about wb and dc universe right now. We all know whats being said by now and while it can be completely false, its possible enough that it may be true. Which is alarming.

That said to the OP i plan to subscribe to this service for as long as its doing what its doing. I feel the same pay about doom patrol, but its bigger than one show. If you want content like what you get on this website/app then just keep with it, and hopefully they will hear our words and make the right call. Cause everything you said about doom patrol can be said about this service. I gave it a shot, and fell in love with dc universe. So im pretty terrified its going to somehow get screwed over by wb, or at&t now that they are the owners.

Its really the later that equally terrify and comfort me. Because they absolutely want their own streaming service. But they are certainly no disney. And neither is wb. Although wb has always had a disney complex, and their primary focus right now for dc is making it as successful as the mcu. And they need to just let dc do its thing and not interfere, while also making sure they have everything they need.

I think if we get some news from San Diego Comic Con, the rumors will finally calm down and some people can relax, because I know a lot of us on these forums are sick of seeing threads where people jump to conclusions and spread wild and unnecessary rumors.

I also think some things will be revealed at SDCC. I’d point out that Titans secured an international distribution for 2 seasons. With Doom Patrol getting picked up by HBO international, I think it’s likely we will hear about a DP second season. Plus you really don’t want to announce a second season until you are done or near done with pre-production, (You have writers, director(s) and cast returning, a shooting budget, etc, etc, etc)

Let’s remember that ST cancel was leaked information, and after that WB confirmed the story was true. I believe and it’s just my opinion, their intent was to wait on the announcement until season one was done.

All that said, the rest of the already confirmed DCU Originals content i am looking forward to. (2nd half of YJ, Titans S2, HQ, & Stargirl.) I look at all of these shows as WB/DC experimenting with different characters/styles/genres and seeing what resonates and is financially viable enough to warrant a second season.

I can’t wait for Stargirl! I’m really curious what S.T.R.I.P.E. will look like. Hopefully it’ll be that initial design in the comics. Not that I wasn’t a fan of the Big O inspired suit, but the original is really cool looking.