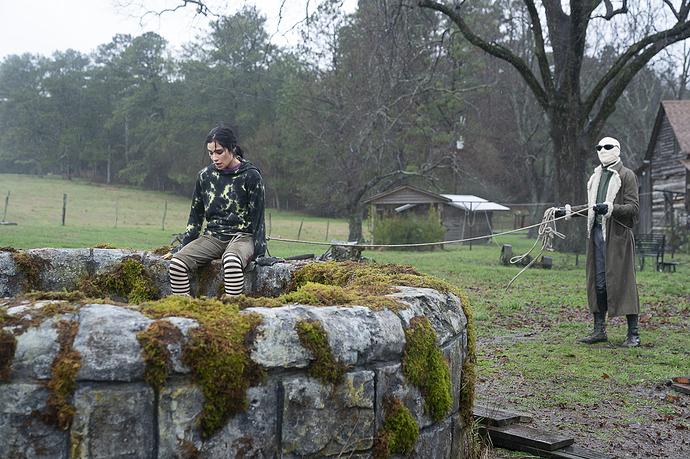 This week’s episode started in true Doom Patrol fashion with another flashback. This time it was in Arkansas, 1954 and showed Kay being dragged out of her home and is thrown into the same well that Miranda came out of.

Back at the Underground, Lucy Fugue has disappeared as well. Miranda appears to say that the personalities have disappeared because they and Kay have ‘healed’, that that is the responsibility of the primary. Kay states that she wants Harry, her stuffed animal, who was last seen inside the well. Jane tells them she will go and get Harry from inside the well.

Kipling has returned to the Knights of the Templar and they reveal they can feel a cataclysmic event coming in their future (being told by way of a mouse master Bunberry). Kipling calls Niles and asks to move up the rendezvous, but Niles declines saying he wants more time to say goodbye to his daughter.

Vic & Rita go to investigate a murder, they go to Roni’s house and the FBI are looking for her as she was seen on the security cameras near the man’s house the night he was murdered. They find a glowing gold substance in a bottle (turns out it’s the oomajelly).

There was A LOT going on in the penultimate episode! How’s this all going to end? How will we handle what happens next?

If you haven’t watched episode 8 yet, make sure you do then come back here and let us know what you thought!

You know what really frustrates me? One episode left and I have not heard a single thing about Doom Patrol being renewed for a third season.

So first we get Steel and Stone now we get Beekeeper and Borg. They need to start making these sideshows into reality because I would definitely watch both of them. It seems just like yesterday that the second season started and now their is only one episode left. Looking forward to seeing how everything wraps up.

I have a bad feeling that Cliff is going to miss the wedding to save the world and end up missing out on his daughter in his life. I hope I am wrong.

I have so many questions before the season ends

Will Larry revisit his family?
Will Jane take back control?
Is Chief gonna die?
Will Baphomet accept Willoughby’s love?
Will Cliff get upgrades or was the confessional tape the only solution Niles had?
What’s gonna happen with Dorothy after all this?
Rita’s play? Will we see it?
We’ve seen ‘Steele & Stone’, ‘Beekeeper & Borg’… will we see ‘Mummy & Machine’ or one with Jane I can’t think of a name for…?

Assuming the next episode ‘Wax Patrol’ is gonna conclude Candle Maker’s story what was the unfinished 10th episode gonna be about?

Cyborg shutting down that FBI agent was so satisfying lol.

This episode was emotional from the beginning, I was tearing up during the first two minutes of it. This season really does know how to grab several “oh no” moments, from me at least, and I think it goes to show how much the actors, writers, and the entire team who put the show together, care about making this show as great as it is. This episode was sad, had some heartwarming moments, and it stands out from the other episodes. I can’t wait for the next one, but this time I’ll bring my tissues.

It really sucks that next week is the Season 2 finale and just read the reason for a short season. But im glad they got to finish E9 (They were 3 days away from completing E10 according to Jeremy Carver) and I can’t wait!

one with Jane I can’t think of a name for…

one with Jane I can’t think of a name for…?

Fun with Vic and Jane?

So does Miranda have all the other Personalities on her Bucket List?

Another episode that had me all over the map emotionally. Cliff reconnects with his daughter (awkward but sweet). Cyborg’s lady love reveals her dark side and now they’re enemies (a bit cliche but still a classic superhero trope). Beekeeper and Borg was hilarious. Loved the British Avengers vibe. Niles and Dorothy share a bittersweet last day (my heart!). Jane has an emotional catharsis in the well - but surprise! Miranda is up to no good and those other personalities ain’t coming back after all. And now the Candlemaker’s free? Sad that next week is the finale but I’m anxious to see how this turns out.

I wish this season wasn’t so short. I’ve been loving it, though I could do without Miranda. There’d better be a season 3!

I don’t know why people are questioning Season 3. This is also on HBO MAX and HBO rarely cancels their shows.

DC PSA: Please avoid Carnivals and fairs, we can not guarantee your safety.

Both on Titans and Doom Patrol, they end at Carnivals!

This episode bounced back and fourth between being bone chillingly horrifying and more heartfelt then star girl. Its some crazy emotional whiplash.

I thoroughly enjoyed this episode. It was great seeing Cliff bonding with his daughter. And I loved the parody of the opening credits of The Avengers with Vic and Rita instead of Patrick Macnee and Diana Rigg! I am concerned about what is going on in the Underground, as it seems clear that Miranda is offing the other identities! I do hope that Jane is able to come back. Anyway, I am a bit sad that there is only going to be one more episode, but I am looking forward to the showdown with The Candlemaker! I do wish they had made more episodes this season.

Way to think Bee Rita! Jerry Seinfeld would be proud.