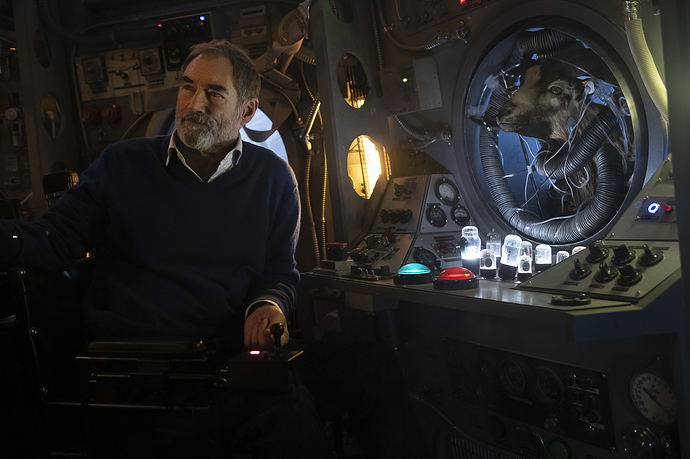 These episodes just keep reeling us in and then punching us right in the feels!

In the Underground, the personalities are mourning the loss of Baby Doll in the destroyed train station – they blame Jane for the incident

A spaceship arrives at Doom Manor – in 1955 Niles was given funding for a group of scientists to research time control in outer space; Niles lost contact with them in the 1960s and figured they were dead. They’re called “The Pioneers of the Uncharted”.

As Larry is talking to the astronauts – Dorothy steals their spaceship and flies into space; it turns out Niles has his own spaceship that he plans on taking to go find Dorothy. Niles asks for Cliff’s help in going after Dorothy – he gets frustrated that she believes she can go running around on her own; Cliff realizes how Dorothy could have gotten frustrated living under Niles.

It turns out Niles created the Doom Patrol partially to give Dorothy a family before he died; he reveals he only imprisoned her to keep her and the world safe from Candlemaker.

If you haven’t watched episode 6 yet, make sure you do then come back here and let us know what you thought!

…WHAT?!..he…but…why…ugh. I’m sure there’s a very good reason for that. Just have to wait till next week to find out. I don’t understand how gross over usage of the F word can become an endearing quality but it has. Cliff is the (robot) man. I could drone on about all the other things from this episode but in a nutshell, It is simply the best show out there. Period. All other programming has lost it’s shine compared to this. LOVE THIS SHOW!

Love how random characters keep showing up around the team. It’s especially nice when it expands on Niles past or the projects he’s worked on to achieve immortality.

At face-value while fun/ridiculous as the astronauts were it’s great there was depth to their situation in relation to Larry.

Really surprised Larry is gonna give it another go with his family.

Rita watching a play about the town from Season 1 reminded me of the episode in Avatar: The Last Airbender when the team watched a play re-telling the previous seasons lol

The scene with Miranda coming out the well + explanation felt abrupt imo but I do look forward to what kind of conflict her involvement will now cause since something feels off.

Cliff would be a better dad to Dorothy than Niles. Yeah I said it.

This episode seemed to me to be a set up for the rest of the season. That being said it will be interesting to see Miranda as the primary and to see how she differs from Jane. Still can’t believe that Niles jettisoned Cliff out of the spaceship and invented space travel. I hope we get to see the finished version of Rita’s play or at least some of it. Looking forward to seeing next weeks episode.

Oh-My-lanta! What the… This episode was great, of course, but holy guacamole, why did the Chief do that to Cliff?!?! And after Cliff was so sweet to Dorothy & was all-in on being a part of her family & taking care of her forever. Just when you start to feel a twinge of empathy for Niles, believing there must be some kind of greater good he’s trying his best to fulfill (even though he makes a lot of bad decisions) &

he goes & does some kind of messed up junk like that! What is his damage?!?! Wow!
In Crazy Jane World: Miranda has emerged! I’m getting a not-cool-at-all vibe on this one. And what exactly is in that freaking well? Is Kay’s disgusting dad in there or something? It seems bad, whatever it is.
Poor, dear Rita… much more transparent than she thought. I find it hilarious that she didn’t even get the part of playing (what ended up being) herself. Then to listen as someone describes her to a tee… so funny!
Larry… Larry, Larry, Larry, Larry… yeah… whatever, dude. I don’t recommend a re-try on the father/son/grandson/great-grandson bonding session. Usually, if your grandson gets shot in the gut on your first visit, visit number 2 is an understood no-go. Just saying.
Cyborg: In his efforts to save his Lady Love from the atrocities she suffered that are steadily killing her, he finds Daddy Silas at the root of it all. Why would he allow his research to be perverted in such a way? What could possibly be a good enough reason?

Hey! Must be the money!

All that, “what I did then made you possible” stuff seems like a pretty weak excuse to me. Silas will do that, but he won’t help Cliff??? What a jerk!
I watched the teaser for next week’s episode. Can’t wait! Still want more Steel & Stone… in space???

Is it just me or is Niles a bad guy?

Totally with you on this was coming in to say he is the season’s big bad;
Dorothy is just his weapon.

The real our town is a terrible play.

Every week I hurry to watch Doom Patrol at my earliest opportunity. Every week, as the end credits start to roll, I have the same reaction:

What did I just watch?

This week’s episode had a lump in my throat for most of the runtime. My eyes may have been moist when Cliff asked, “Why is everyone so mad all the time.” (The quote may not be precise).

But that end? Niles! What have you done?

Niles Is A TERRIBLE Man!!!

You Guilt Cliff Into Rescuing Your Daughter Then You Toss Him? Wtf!!!

Miranda Is Here & She Gives Me Creepy Vibes With Evil Intentions. I’m Curious To See How This Plays Out.

I Was Really Hoping We Would Get To See The Negative Spirits Interact Outside The Bodies. I’m Glad Larry Met Someone Who Could Understand His Struggle.

Niles is the absolute worst! I cant believe he did that to poor Cliff!

This show is wild

Okay, just… What?! Congrats Chief Niles Caulder, you are officially the WORST ever. And who the heck made Cliff the voice of reason and calmness in the maelstrom of WTFs that’s Doom Patrol? This episode just… Overall this series makes me question further my sanity but this one… What the hell?!?

I am not up on the comics so I am just going out on a limb but if no one (almost said nobody but that is someone AKA Mr. Morden) comes back from the well what if Miranda is “he in the well” possessing her “body”.

Both Silas and Niles have evil tendencies, although to different degrees. And hey…NEGATIVE WOMAN!!! I hope we see more of her in the future. Larry needs to open up to someone who knows what he’s going through. And yeah, it’s probably best for Larry to give up on the idea of a family reunion (holidays would be so awkward!). On the plus side, we see from the next week preview that Cliff is going to be okay. As for Rita, I loved what was happening with her story, but as usual, they didn’t spend enough time with her character. Maybe on the next episode, we’ll see more of her journey.

And get ready, kiddies for next week…The Beard is back!!!

I love this show. I just had a terrible, horrible day and was cussing l like Cliff on the inside like he was in my underground - if I had one. This show always helps me feel better.

I don’t know what Niles’ game is. I’m assuming he’s going to try to keep Dorothy in space for awhile and didn’t want Cliff to interfere. I’m not sure I trust Miranda, either and I wonder if Larry will really get any joy at all in trying to reconcile with his family. All I can say is that I can’t for next week.

By the way anybody know if Roni , Vic’s girl, was in the comics? She sounds like someone that should have been.

Also I would just like to add that the rocketships that Niles designed are awesome. See what an aluminum shed, some ingenuity and a little elbow grease can get you?

Wow, that was an intense episode. I expected the fall out from last week’s episode to be rough. But I didn’t expect Dorthy to run away to space. I’m not sure what Niles is planning but the moment he asked Cliff to put away her helmet I saw it coming. Don’t go alone into an airlock when Niles is at the controls, people.
At first, I thought Larry was going back to Rita/Cliff/Jane and Co. and was calling them his family. But I guess not. I liked him seeing someone else with a negative spirit and just deciding he wasn’t going to be like them.
I really hope Jane makes it out of all this okay. The Miranda curve ball feels really out of place. Especially, after talking with Hammerhead about personalities they haven’t seen before. What if this is someone else pretending to be Miranda, who just became the Primary? The rest of the team is going to be pretty confused.
I do like the idea of Niles being the ‘big bad’ this season. And it does seem to be trending that way. There is no way he let Babydoll and Dorthy play together without thinking something bad was going to happen.
I hope him being the baddie brings Mr.Nobody into the fold again, though. He was right. Niles is a terrible person. He’ll want to make sure everyone knows he was right.

Nothing could be as surprising a cliffhanger as last week’s Dorothy/Baby Doll fiasco. It’s nice this week to see a relatively calm, heart-warming epi— holy cow, Niles just did that!!

Glad to see I’m not the only one who doesn’t trust Miranda. Jane better start knowing some stuff real quick.

Bruh, Cliff really just put that finger in the fridge next to all the food?