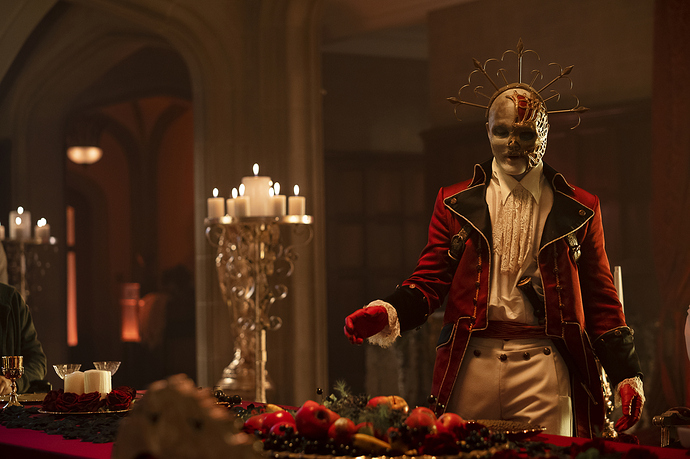 Once again, episode 3 started with a flashback, this time in London, 1888 and it is here we learn the terrifying truth of what that field of butterflies from episode 2 is all about.

We’re introduced to the madman, Red Jack, and learn that he has Larry and is holding him captive unless Niles agrees to have dinner with him.

We see Larry being hung upside down as his bandages slowly unravel, as well as discovering what that means for the human cocoons on the floor below him.

This episode left us with another cliffhanger - what will happen with Jane now?

If you haven’t watched episode 3 yet, make sure you do then come back here and let us know what you thought!

Hopefully Cliff didn’t permanently ruin his chance at rekindling any type of relationship with his daughter. I’m also curious as to where Cyborg’s story goes.

Glad Niles has gone from just trying to talk to the team to performing actions to help them. #RobotMan2.0 Looking forward to that

Got some ‘Hellraiser’ and ‘The Fly’ vibes from this episode. The butterfly transformation was disgusting/confusing at first but the twist made it even crazier/sadder.

I thought this was a fantastic spin on the Morrison/Case source material. I only wish we could’ve spent even more time with Red Jack! The terror of Red Jack’s “I am God!” declaration would be hard to give weight / follow up after Mr. Nobody and within such a short timeframe, and yet it was the metaphysical touch that gave the comics an even more sinister, real power.

I’m impressed by how thoroughly the source material has been mulled over, and also by how new the production team is keeping these familiar stories. Looking forward to next week!

Not gonna lie, Red Jack is one of my new favorite doom Patrol Villains.
Hopefully Niles will focus instead of trying to stay alive but instead fixing to the best of his ability the pain he caused the doom patrol.
Also friendship goals are Larry and Rita

Red jack is ruthless! Also that was a bad move Cliff! :robotman_dp:

This episode is my favorite so far. Very awesome™️

The flashback with Jack was great. Seeming as the ripper and a little look into Niles’ past.

Cyborgs story was interesting. They learned about each other but then she shows her past an he couldn’t take it. Man wonder how things will play out.

Dorthy’s hide and seek fun was nice. But poor Danny. Hopefully Danny will be fixed. And her French toast looked good.

Jane and Cliff’s adventure was fun. Nice to see there friendship is still something.

Jane has the intervention. Nice to hear how she feels about her team. The Roar bit was fun. But why don’t they want her to have other friends. They’re going to have to learn this season I guess. That going to be a wild ride.

Cliff Screwed up with his daughter. I feel bad for him. There no perfect way to do it but going in angry not the best move. Congrats on the baby though. Nice to see she’s moving on. Those cops were hilarious. Just watching his mental breakdown.

The Red Jack adventure was insane. His room was crazy. Larry torcher was crazy. All those poor people and poor Larry. Rita saving him was great. Well done Rita. And the Chief. Felt what Robotman felt. Those butterfly wings where I unexpected gruesome and amazing all at once. Man he was crazy. The Chief for the win and Larry and Rita saving the day. Red Jack is definitely a new favorite character. Wonder if he’ll return or not.

Seeing Larry and Rita’s friendship was great. Some touched on last season but now we see how they met and how they’ve grown. Very awesome tender moment.

Cyborgs story was interesting. They learned about each other but then she shows her past an he couldn’t take it.

Should he take it? I mean he took her disfigurement in his stride - didn’t bat his eye, reassured her it didn’t change how he felt and generally was a great all round guy. Now he learns she committed voluntary manslaughter. That’s not something you put on the person who objects to it as “you can’t handle me” sort of stuff and fault them for walking away from you.

I was glad to see Cyborg stick to his principles last week as well when she insisted he let her assailant go. He’s not being uncompassionate and he did let the guy go when she asked him to. But he’s right that in all liklihood that guy will go on to attack another woman (we know from the police file he’s done this multiple times) and that next victim is unlikely to be a “badass” as he put it. I like that this shows lets people genuinely put both sides of things.

Voluntary Manslaughter isn’t legal murder (though actual murder is often plea-bargained down to manslaughter so it can be); but it’s still deliberate intent to kill or disregard for if you kill someone. She’s gorgeous. And she probably has reasons why she killed someone. But people always do.

It was an accident but anyone would feel guilty about it.

I thought Red Jack was absolutely frightening. I actually was happy that Niles shanked him.

I really like Rita is becoming a bigger part of the team. She’s doing wonderful so far this season.

@LT1 oof!! Especially because Danny had just been hiding as a lamppost in their game of hide and seek … but perhaps Danny will regenerate like a single cell in mitosis, splitting off into two and growing to the same size …

Yeah I agree he shouldn’t take it at least not without the full story. It was great to see him sticking to his code but every hero with code makes exceptions in one way or another. If things seem better than what they look on paper (which would be difficult with what she did) than good and if things don’t well it’s still up to him.

Sorry but the kid thing is wrong. He shouldn’t punish a kid for it without even knowing what the kid is going through. I feel every other super hero would let the kid go, even Batman

Yeah we need the full story but that picture was awful

Red Jack was creepy and yet awesome at the same time. Enjoyed Rita and Larry’s backstory of them meeting and become good friends. Cliff really messed up things with his daughter at least for now. Jane might be in some trouble with her other selves. Hopefully this is not the end for Danny. Looking forward to the next episode.

This show is weird. It really isnt a show that makes my day happier. Its more like staring at a traffic accident and find you cant look away. Anyway I will always come back for Robotman.

Dorothy is the living incarnation of Salad Fingers.

Another strong example of why this is the best superhero show.

There really aren’t any new super powers. However this show proves that characters are more important in this genre .

Loved that they had Larry cowtow to Rita last season ,and this season we see why. It’s amazing that a series in this glutted world of media content would have the courage to take that long with character development .

And that’s why we come back to it each time .

The Production Design is amazing- I was blown away by Dr Tyme in S2 E2 , and Red Jack took it up a notch in another direction. They also are finding ways to make Niles sympathetic-- if you read the comics , he’s a Jerk . I think changing the source material to give him Dorothy as a motivation was genius.

So was Danny playing hide and seek .

My real concern is that they blow through the Morrison’s source material too quickly. I would have expected Red Jack to be at least 2 episodes . As it turned out it was better not to. It would have gotten old quickly. (And it didn’t get too Squire of Gothos " I’m all powerful and you are at my mercy – " that just seems like lazy writing. This show gives the characters a chance , and when they fail its because of a character flaw. ) Even so they are taking the weird and wonderful visuals from that comic run and bringing them to life . Hopefully we wont run out .

Just watched all 3. Out of all DCU Originals, this sits comfortably atop the mountain. It’s so good.

What a great show! Hope there will be more than 8 episodes or a 3rd season .