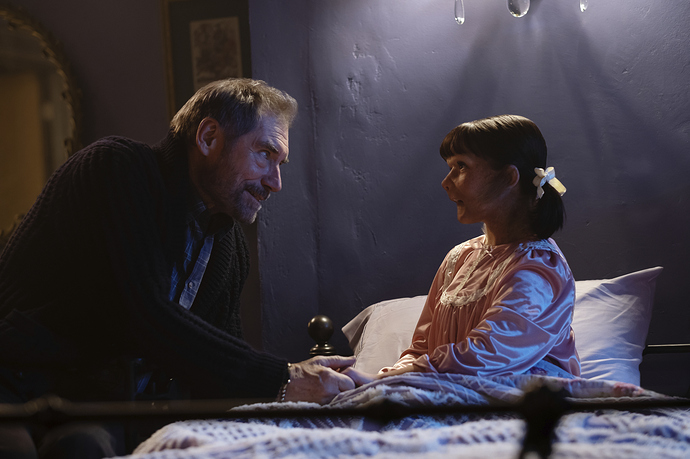 What a start for Season 2! We got to see Dorothy’s backstory at a circus in 1927, the trials and tribulations of being action figure size, and Negative Spirit working and interacting more with Larry to try and let him know something through visions.

The real question we all want to know though is - what happens to The Chief without his necklace?

That opening sequence was amazing! I feel like what they introduced with Larry and his family was a logical way to go, but it also feels a little bit like a retcon because he never seemed like that toward his kids in any of the flashbacks from season 1. I like how Jane and Dorothy’s similarities are being addressed. The rat part with her babies was just nasty. Rita’s continued journey and character development is one of the brightest highlights of this show. I can’t wait to see how much she progresses this season. I’ve missed this show!

Where can you watch it?

HBO Max put it on their site since early this morning. Silly 9am rule that DC universe has about releasing episodes

Yay I just started watching. I feel bad for dorthy

Another great premiere for Doom Patrol! Feel so bad for Dorothy and while Niles is still messed up in the way he handles certain things I’m glad he’s trying to seek redemption for his past but it’ll be a long road I feel since the team is very much in their right for how they feel about him.

Also pleasantly surprised we’re still getting scenes with Brendan Fraser and Matt Bomer in the flesh to further expand their past.

I expected Dorothy to use her powers to “re-grow” the team since she made Ezekiel and Admiral Whiskers giant in the Season 1 finale but it seems like she doesn’t have great control over her powers so I guess it was just instinctual or emotional for what she did in the painting on Danny The Street when Mr.Nobody was there.

I still wanna know what Jane and Cliff were going to say about Niles romantic choices!

Cliff’s flashbacks from being on his tiny racetrack back to his time on the motorway is such a brief and elusive joy before he’s plunged back into the trauma of the accident again. What a biting way to take us into his emotions and headspace!

Happy to see a new Patrol. I feel like this is the flagship of DC . This was the reason I joined this community. The issues and representations of real people in fantastic situations is really incredible. And for someone who has read the first issue through Morrison into GW , the stories while adapted are spot on the weird and wonderful world of Doom Patrol. Dare I say there are aspects of this show I love more than the source material?

Also when do we see Danny and Flex ?

Absolutely Loved This Episode! That Was A Good Start To The Season. Dorothy & Her Friends Are Wow

I’m Excited To See Even More Character Development, They Are Heading In The Right Direction As A Team Even Though They Have Their Own Struggles.

Ooooo, Rita wants to be a hero.

There appears to be an evil genie living in Dorothy. That’s spooky.

You saw Danny this episode as Danny the Brick!

I didn’t realize how much I missed Doom Patrol until I saw there were three episodes released today.

Nice to see it takes place practically right after the finale give it take a few weeks as Cliff said.

Dorothy’s opening was sad. Felt sad for her and with her flashback. But her friend seem cool and nice to see the connection with Jane.

Cyborg still going through the stuff with nobody. Rita want to be a hero is cool. Robot man feeling some trauma in car scene. Larry sadly learning about his son. And Jane is well seems to be dealing with change.

They’re angry at Chief still which is understandable. But he seems to be trying.

The tiny adventures were fun. And the pancakes were great. I want some tiny pancakes.

Why did Cliff hurt the rats. I know he has a grudge but those aren’t the admiral. But the baby scene even if it’s natural it’s still hard to see poor baby rat.

And good Great Value Constantine is back. But made a bargain with the Chief. How will it go.

All I’m gonna say is…wow! What a way to start a second season! :robotman_dp:

The tiny pancakes were a big hit in my house too.

As for the rats , sometimes when you are a tiny brain floating in a nutrient bath inside a tiny robot body because a mad scientist who looks like a cross between an evil time lord and James Bond wants to live forever and kills your family… and there aren’t any tiny giant alligators you have to hit a rat.