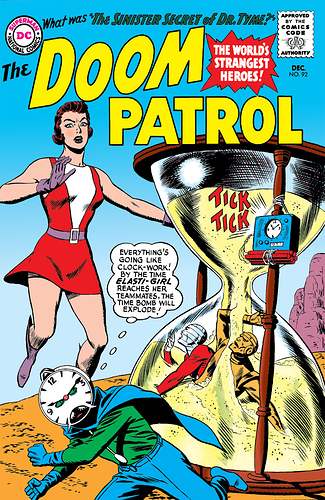 There is a new costumed criminal in town: Doctor Tyme, a clock-themed villain who has perfected a beam which can freeze, slow down or speed up time according to his whims. He uses this power to rob an airplane–a daring mystery that attracts the attention of the Doom Patrol.

Welcome everyone to another strange week of Doom Patrol Club! This week we’ll delve into Issues #92- 97 and reading more into the history of Doom Patrol!

Make sure to read through these 6 issues and tell me what you think down below! Let’s Discuss!

I’m really committed to reading along and commenting as you post these. But wow am I way behind. I’ve got one more to read of the first batch.

I got to keep at it and I will catch up in the next week one way or the other is my plan. I own a selection of these 60’s issues and they’re very special to me.

I’m on the same boat, about in the middle of My Greatest Adventure, but I’m gonna catch up, so help me!

Nice! It’s ok. Take all the time y’all need to catch up

Heh, between that and replaying Doom to get ready for Eternal, I’m now having a crossover between Doom and Doom Eternal in my head.

I’m having a hard time not hating EVERYBODY for how they treat Rita. 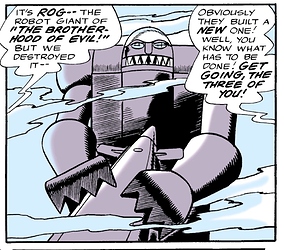 – is short for “Roger” and pronounced with the J sound. It’s canon now! 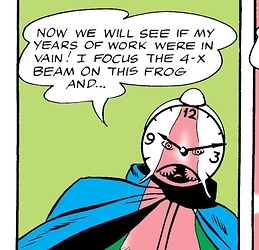 So, is that Clock King? I kinda dig his gear teeth.
First, I want to call baloney on the baby crawling into the safe. There’s no way the baby gets up in there and crawls in. I think mom did it. But that’s just me. 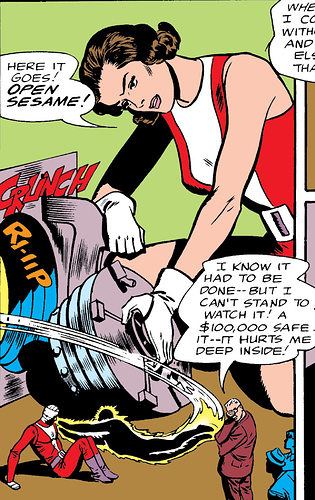 Wow, Mento just sticks his brainwaves into Rita. That’s not a good precedent 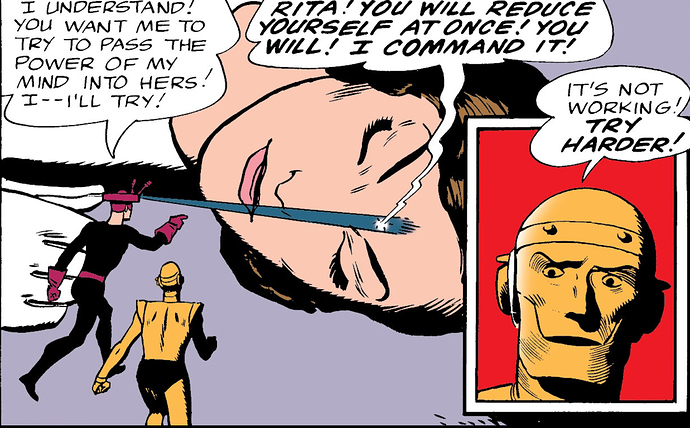 Someone alert @Don-El It’s giant Rita in the water with a sub and a yellow sky! 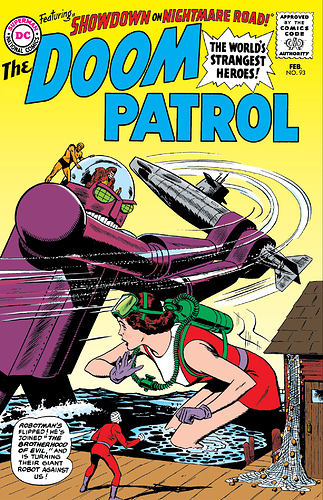 That is Dr Tyme! He had to spell it with a Y to be avant garde enough for Doom Patrol

Yea, his name is pronounced different and

, thanks for the thoughts on this

I did not know the original Doom Patrol series was this good. I had enjoyed the My Greatest Adventures issues. They were fun, quirky and fast. Now that Haney is well into the run, these are genuinely great stories. I’m particularly impressed by the long game he has played, weaving the Patrol’s biggest villains Garguax, General Immortus, and the Brotherhood of Evil into a single overriding threat. Two of these, the General and Brotherhood, appear unlike other villains you’d find from the time. Immortus is your average Ratsi general, except of course his 2,000 years old and is always grinning like a loon. 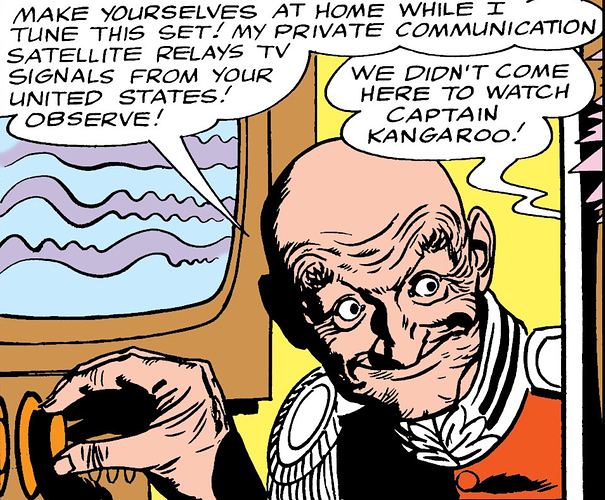 The Brotherhood is led by your average yelling, pontificating would be world conquerer, but of course he’s a brain in a jar. His best mates are a talking gorilla and an evil private school mistress. 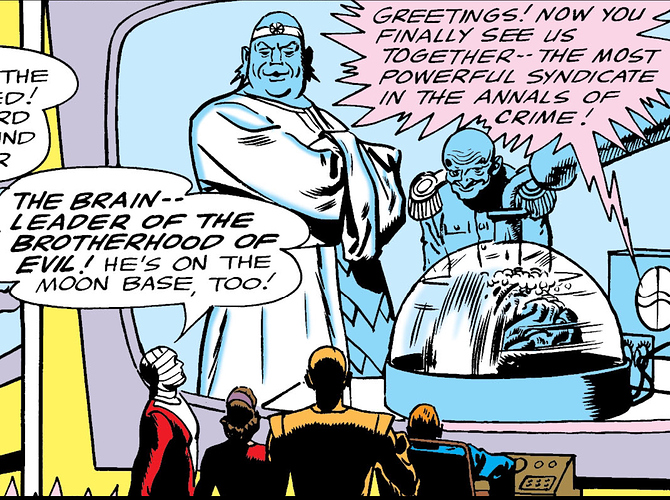 Then we get the tale of egomaniac Steve Dayton, who never tires of reminding us that he’s the 5th richest man in the world. I love that in the end it’s Rita who keeps him out of the Patrol.

I also like the conflict within the team. You wouldn’t see that in the Justice League at the time. 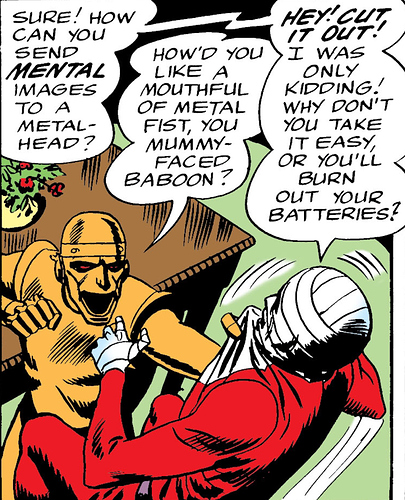 Lastly, chief is still kinda a jerk. Robotman gets robot face. Chief gets a fully sculpted face, beard and all. 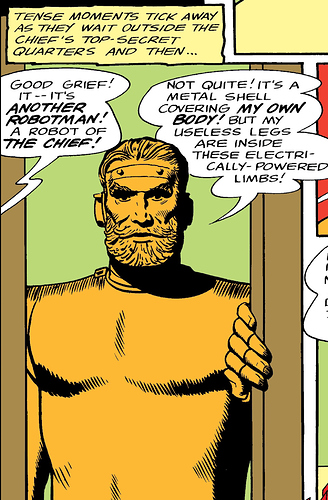 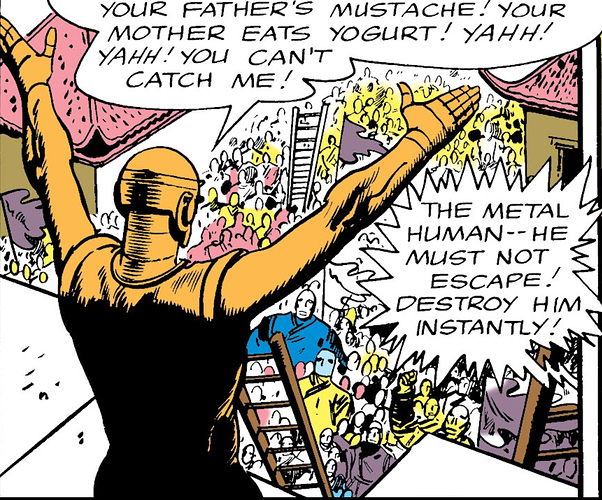 Cliff lol, thanks for the expanding thoughts on this @msgtv

re the team conflict, it’s mind boggling how Doom Patrol and the Fantastic Four were doing the same thing at the same time. I think Stan Lee’s on record as saying he was recreating the team dynamic of Doc Savage pulps, so it makes me really wish we knew what influenced Drake/Haney.

I’m particularly impressed by the long game he has played, weaving the Patrol’s biggest villains Garguax, General Immortus, and the Brotherhood of Evil into a single overriding threat.

Same here, Doom Patrol in a lot of ways felt more ahead of its time. This kind of storytelling I would expect from something in the 70s or early 80s more than the 60s.

it’s mind boggling how Doom Patrol and the Fantastic Four were doing the same thing at the same time.

Funny you compare them to the Four, when what I’ve seen, everyone compares the DP to the X-men.

Yeah, crazy parallels there, too!

yep, and feel like that’s a good thing :robotman_dp: