Does Marvel Exist Within the DC Universe?

It exists within the multiverse.

During Infinite Crisis, there’s this moment where Alexander Luthor takes Earth 154 and Earth 462 and smashes them together to ccreate Earth 616

Has it been shown somewhere?

I read infinite crisis but it doesn’t say(at least in that screenshot) that it’s earth 616, let alone marvel’s Earth 616

The Marvel and DC characters have crossed over numerous times, which requires them to be part of the same multiverse.

I mean more in the lines of this

Has it been shown somewhere?

I would love to see where this happens more, too! There have been quite a few crossovers which I’m sure you’re aware of, but seeing Marvel casually mentioned in DC pages would be interesting.

Where in Marvel is DC referenced? I wonder if the Batman/Captain America crossover is what elicited that reference.

I know characters make reference to MU characters but I assumed it was that marvel was the comic distributor in the DCU (cause why would DC exist inside the DCU?) similarly to how the powderpuff girls show is constantly playing in the background of the movie Blade 2, the fiction exists but its recognized as fiction. 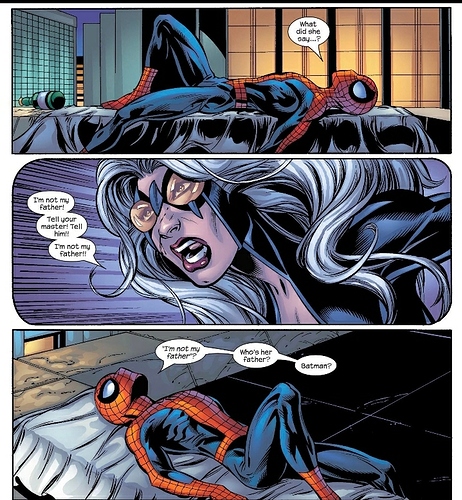 Not sure if it’s called marvel but there is a comic company within the marvel universe that publishes comics base on their(marvel) super heros base on their lives/adventures they’ve gone on.

In my personal head-canon, the Marvel universe does exist within the DC Universe.

I cannot speak towards anyone else’s personal head-canons, but if they are half as cool as mine, then the answer to the question is definitely yes.

Pre-Crisis, the clearest evidence of Marvel characters being known by people in the DCU (and vice-versa) was the B-plot at–appropriate to this time of year–the Rutland Halloween Parade. Steve Englehart, Gerry Conway, Len Wein, and Glynis Oliver Wein (and a few others) worry over Englehart’s car getting stolen by supervillains in Amazing Adventures v2 #16, Justice League of America v1 #103, and Thor v1 #206-7. The background story runs through the books across both companies, includes writers from both companies at the time, and shows costumes of characters from both companies, though it’s been long enough that I don’t know if either company was named. It’s likely that there were more mentions of Marvel during that period, since the two companies’ offices were in close proximity.

But then, you also got weird situations where writers would continue stories from one title to another, implying that the Marvel characters all literally lived on DC’s Earth-1 (and vice versa) and that the comics were just mostly turning a blind eye to them. Englehart brought Mantis from his Marvel work into Justice League of America issues as Willow, for example, and the unresolved Steve Skeates cliffhanger in Aquaman #56 (not on DC Universe) was resolved in a Sub-Mariner comic, with the last panels copied into the prologue.

More recently, I thought it was a lazy move, since references in dialogue aren’t exactly trademark infringement, but Grant Morrison’s The Multiversity features “Major Comics,” which publishes the adventures of Marvel-like characters that are echoes of events happening on Marvel-like Earths.

On TV, it seems a bit different. Especially in the Arrowverse shows, they regularly name-drop Disney-owned properties.

It totally exists, either it exists in the multiverse or it’s like Jay Garrick Flash and it’s a comic, but also a earth.

My mothers boyfriend has copies of crossover comics between the two companies.

Next time he comes over I will talk to him about it, I know he still has them.

Well we know DC as a publishing entity exists within the Raimi Spider-Man movies.

“You’re not Superman, you know!”

Also there’s a New Teen Titans/Uncanny X-Men crossover comic from the 80’s, which I happen to own. Raven is uneasy at Wolverine’s capacity for violence before even seeing him in action.

There was a whole thing called “Amalgam Comics” in the 90’s, where Marvel and DC officially had their heroes fight each other, and then merged them (“Darkclaw,” “Super Soldier,” etc.). It was fun. Not great Literature, but a pretty good time.