Does Anyone Know Where to Find Amalgam Comics?

I’m interested in reading Amalgam comics (mainly Dark Claw). Does anyone know if they are on DCU or Marvel Unlimited (or another service)? If it’s not on a service I’ll buy them on Amazon but I thought I’d make sure first.

24 issues in total, 12 in the first run and 12 in the 2nd. They were released in trade paperback volumes, 4 in total- 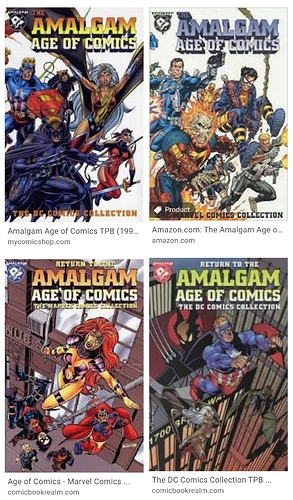 But they’re out of print and pricey to try and find elsewhere. You’re best bet for a nice, single issue copy is eBay. Prices vary, depending on who you’re buying from.

Thanks! Not exactly the best news but I appreciate the answer!

I have 5 extra that were just reading copies (including at least the first Dark Claw book they released) if you want em. Just DM me the address to send em to (and give me a few days to put the package together to ship it).

Amalgam brings back some good memories. I was in my LCS when I saw them on the shelves. At first I thought Amalgam was a separate publisher who were going the Image Comics route of ripping off what was popular at the time. I was fascinated by the covers. When I later learned it was part of the DC Vs Marvel crossover, I wanted to read them even more!

My favorites were the ones I first picked up: Legends of Dark Claw, Bruce Wayne: Agent of Shield, Super Soldier and Spider-Boy.

That’s extremely kind of you but I’ll just buy 'em off the net. Thanks for offering though!

Kinda similar, i was hoping to get a digital copy of JLA/AVENGERS from comixology and it was a no go. With disney buyin up the predator rights, those awesome Batman vs predator books from the early 90s will be gone soon. Print versions are the only way for some books

I’ll never understand why they don’t have a friendlier relationship. I don’t see how well written, well drawn crossover isn’t viewed as an advertisement of your character to a group of fans who otherwise might not have read them.

The first time I saw DC vs Marvel was at a newsstand, where I was buying a Venom comic (my comic collecting world was severely limited at the time). But seeing Superman standing next to the Hulk stopped me in my tracks and I had to have it.

I partially blame Quesada for this. He’s said before he doesn’t want Marvel and DC to be friends, that he prefers the rivalry (not in a malicious way, but in a spirit of competition way) and aside from JLA/Avengers, we got no other DC/Marvel crossovers after that.

I remember when the lockdowns started and people were worrying about the future of local comic shops and the industry in general that some creators were talking about a great way to get people back after the pandemic falls away would be a Marvel/DC crossover, something big and spectacular that could bring not just current fans, but lapsed fans and people who only experienced them in movies or TV.

It would be great if they were secretly working on this and surprised everyone with a new crossover in late 2020 or early 2021.

Can you imagine reading an issue of JLA, that ends on a splash page of Spider-Man showing up in the Hall of Justice???

I’ve been hoping they would merge. I know some people are afraid of that but I think it would be nice.

I thought it was a real possibility, when Disney was buying every company in sight. I thought Warner Bros. was next for sure.

Seein that would shave 30 years offa me. Mentally at least, I’d still be a crusty 40somethin…heh,heh

@boodikhan
Mentally young enough to be excited to see DC and Marvel chatacters existing in the same universe, physically old enough to buy a 6 pack of beer. Best of both worlds