Do You Care About Continuity? 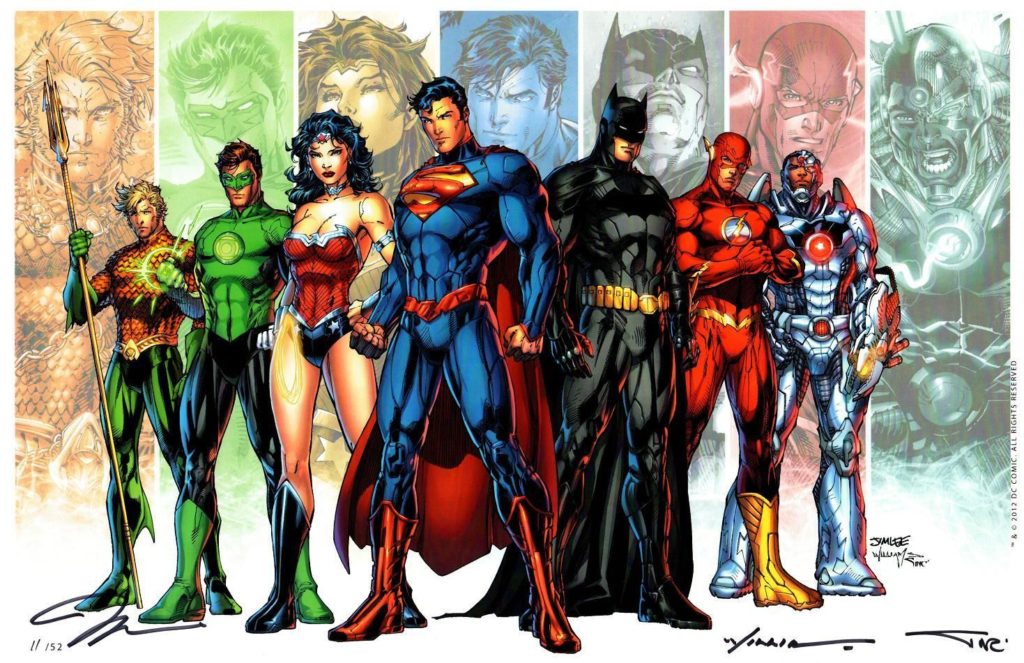 Every couple months there’s a new rumor of the DC Universe rebooting again. It usually gets picked up on the forums and people are upset about the constant breaks in continuity, but I’ve never been someone who particularly minded. I’ve always been someone who just doesn’t give a crap about continuity. I just like reading good runs. For example, I skipped most of Nightwing Rebirth in order to move ahead and just read The Untouchable run. I just want to read a good story, and whether or not it’s perfectly integrated into the overall universe is kind of irrelevant to me.

There are always bad runs and good runs in all comics, but I find it interesting to see the way some people blame the bad runs of Rebirth or New 52 or whatever because it’s a reboot.

I’ll admit that I’m a very casual fan of comics. I’m not picking up every story (even of the characters I love), and I’m not following every line of coninuity. So, for those of you on the forums (particularly those who are more passionate and devout followers) do you care? If so, why? Help me understand. And if not, maybe share your own reason for not caring.

WARNING! Don’t hate on someone for having a different opinion from you. Feel free to discuss and share your opinions all you want. I ENCOURAGE THAT!!! But someone isn’t dumb or stupid because they disagree with you.

I’m more bothered by continuity breaks within an ongoing run than full-on reboots.

If a reboot winds up not suiting my tastes, it really sucks, but I can move on to other titles or enjoy old favorites. Yeah, it hurts the heart, but I’ve (begrudgingly) come to accept it as an inevitable part of evolution with characters/universes that have existed for decades.

I’ve got way less patience with continuity breaks in ongoing storylines. It too often feels like writers box themselves in a corner, or were stretching for ratings, or too lazy (or indifferent) to familiarize themselves with what came before. As a consumer, it can make you feel like the time and thought you’ve invested in a series has gone to waste.

What about continuity breaks between two series. Like, in the New 52 Superman was completely different in Action Comics vs. the Justice League runs. Do you care about that? Or is it mainly just within the specific character’s series?

If I like a character or story, I want more stories to follow up on it because then I’ll probably also like those. So I hate when reboots erase something good, especially if they go out of their way to replace it with something that’s worse, less interesting, or a regression of good development. It’s wasteful and cuts off opportunities for good stories/runs.

Everything fitting together and making sense timeline-wise is a nice plus but I don’t really care if things get a little fuzzy. Like if a character seems to be in two places at once, it’s a little distracting, but it doesn’t really matter. And even something more qualitative and less fussy like a character’s personality probably has more to do with the writers’ styles than inadequate continuity-policing.

But generally, I find that most good stories that happened after reboots didn’t need the reboot for them to happen. I associate the idea of a reboot more with the destruction of what came before than the introduction of new things.

That’s an interesting perspective. I see that a lot, that reboots are a destruction of all the good before. But I’ve always seen them as good ways to get new readers who aren’t able to hop on some stories as easily because it has so much history before it. Like, thank god I started reading comics when New 52 came out. It was great to be able to hop on and read stories without needing to know a ton of history. Thoughts on that? Or maybe counter perspectives?

I haven’t read that far, and it sounds a little strange to me to have a character present in two different ways in concurrent titles! I suppose I wouldn’t mind it, though. I’d just stick to the title I preferred.

The New 52 was plagued with inconsistencies and at least the Green Lantern and Batbooks still relied on most of the past baggage and history. Basically, I’m not sure the New 52 was actually easier to start reading, or if it was, that being a hard reboot was necessary for it to be so. I think they advertised it as a jumping-on point and new readers saw that and jumped on.

I do and I don’t. Like you, I want to be entertained for 15 minutes or so when reading a comic book. Usually that involves characters I like, a good story and great art. I haven’t missed an issue of Superman, Batman, Wonder Woman or Justice League in years. So when something comes up in a run or story, and I can link that to something I read before or somewhere else, there’s definitely a sense of reward. The opposite is also true, when I find a book impossible to comprehend without going back and reading a bunch of other stuff, it can feel like a chore. Sometimes it’s a fun chore, and sometimes not so much.
Do I demand continuity though? No, not at all. I look at each writer’s take on a given character or team to be unique. It’s the only way for me to enjoy the different tones, artistic styles and character interpretations all the writers and artists have to offer.

I like continuity, but it’s more important that the story is good.

Like with all things in life, being smart about it is key. If a plan isn’t working, change it. If what is already done was a terrible foundation - screw continuity, let go of pride and let it burn.

If your pitch is on the format “it’s… but…” - throw it in an Elseworld, your “…but…” is something that continuity is going to have to live with forever, or we have to break continuity. Elseworlds were made for “… but…”:s - continuity wasn’t.

And even something more qualitative and less fussy like a character’s personality probably has more to do with the writers’ styles than inadequate continuity-policing.

Whoa! As someone who chooses their reads and watches based on character more than plot, I don’t know if I would ever put personality in a qualitative or fussy category.

That’s actually one of my vaguely alluded to beefs in my first post. I hate when characters speak or act in ways contrary to their established personality.

Outside of reboots, another point: If I don’t understand an issue because I haven’t read the last fifteen issues of the same series, that’s fine. Sometimes a writer wants to tell a continuous story.

If I don’t understand an issue because I didn’t read an obscure Bronze Age story that retconned an even more obscure Silver Age story about a character I’ve never heard of, that’s frustrating.

Then there’s the reason writers sometimes do that anyway: If I do understand the latter issue because I did read those old, obscure stories, it’s actually really rewarding.

So I’m torn. I kind of enjoy going back through old content and “doing my homework,” but I know not everyone has that same taste. I think to some extent, a healthy mix of stories that require very little context and stories that build on what’s come before is ideal.

Whoa! As someone who chooses their reads and watches based on character more than plot, I don’t know if I would ever put personality in a qualitative or fussy category.

That’s actually one of my vaguely alluded to beefs in my first post. I hate when characters speak or act in ways contrary to their established personality.

I think you might’ve misread what I was saying? I said the personality wasn’t fussy. I would say it’s qualitative in the sense that you can’t so much point out “X explicitly contradicts Y,” and more “This doesn’t quite feel like the same person.” I guess it depends on how far off the two portrayals are, and whether one is notably better than the other, or if they’re equally legitimate.

Well, I think some of the best aspects of DC characters are how malluable they are. Batman can be dark and menacing or funny and campy. Hal Jordan can be a wise ass and funny or morbid and evil. I mean, all of these characters have been around for decades. So which iteration of their personality is their “right” one?

I enjoy continuity. I think it’s a strength of the medium and I feel invested in character histories.

So which iteration of their personality is their “right” one?

I think that goes back to what you said about Superman in Action Comics vs Justice League.

I’d say the right Batman is the one built upon in that single run. So he can be gritty in one series and campy in another, but to have him behave outside of the parameters set for him in any established title can come off as sloppy, ignorant, lazy or drama-bait.

I’ve struggled with that one a bit. Seems there’s usually a consensus on how a given character is supposed to “be”, especially with fans that have been reading a lot longer than I have. Deviate from that and internet forums object, rather loudly.

I too have “ideal” pictures of my favorite heroes in my head. If a writer deviates, I feel like it adds to the fun of it all. Sometimes it opens up my mind to other possibilities and sometimes it confirms why I feel a certain way in the first place.

As far as there being consensus on how a character should be, I don’t know if that’s true. For example, the DCEU is beloved by many DC fans despite it being pretty different personality wise for these big characters.

I’m of two minds about this:

Maybe you’re right. I’ve found myself on the receiving end of the “how can you like xyz” argument many times, which is why I mentioned that.

Just a couple of examples; I’m sure I can think of more. Almost every time I understand the criticisms, but I feel like part of a minority that doesn’t mind the deviations.

Oh, I can think of the most recent one that’s bugged me. And maybe nothing will come of it, but it was enough to knock me out of the story.

I’m currently reading Grayson’s Nightwing run. When Babs finds out Dick is in pursuit of an unknown female in costume, she gets jealous. As far as she’s aware at this point, there is absolutely no reason to suspect Dick is doing anything to betray their budding relationship. He’s pursued other unknown females, villains and otherwise, countless times in this title.

But suddenly Babs is snapping at him, biting her lip, and behaving like a paranoid-jealous-girlfriend caricature.

It’s a little thing but it goes against the trust she’s had in Dick throughout the rest of this title. It felt like drama bait.

Another tiny thing that bugged me - when Dick catches up to the woman (Tarantula), he straddles her to pin her in place, so she slaps him. If it was a bad or ugly character pulling a move like that, people would call it rapey. But to me, it felt like an out of character move by Dick purely for fangirly purposes.

Also just started Tim’s new writer, following Dixon’s exit. When Tim has to make up some classes at summer school, he thinks something like “What a bunch of losers” when he enters the room. Considering the very eclectic groups of friends he had at his prior two high schools, it felt like a very snob move, and not the kind of personality I equate with Tim.