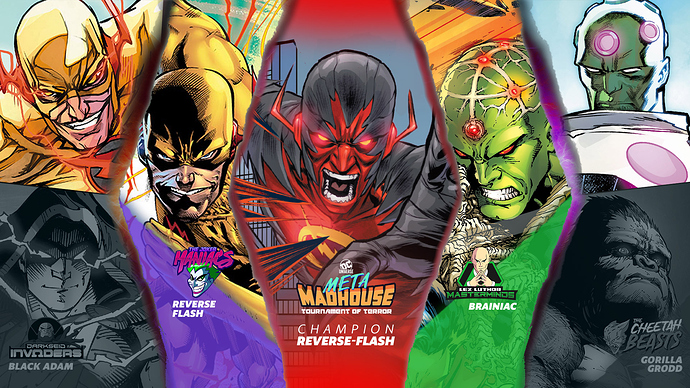 Watch the announcement on DC Daily here, and read our analysis here!

Of all the villains in all the world, you had to walk into our TOURNAMENT OF TERROR. It took four weeks and dozens of brutal brawls, but fate, the Lazarus Pit Save, and you have determined these finalists.

How do you feel about this last villain standing? Sound off in the comments below!

If you want more ways to celebrate your Beastly spirit, check out these other topics below, or wear your pride by updating your profile!

Sinister speedster from the future versus a powerful wizard from the past.
A Super Computer versus a Super Gorilla.

What a championship it will be with whoever is left standing after this round!

Gotta go with RF over BA. Thawne is just to fast and to brutal. BA can’t respond in time. The speed of Mercury is on thing. However, Mercury was never able to travel the speed of light.

Brainiac over Grodd. Brainiac is the one villain Grodd ain’t a match for. I’ll give the advantage to Brainiac as he has more physical weapons available to him in a physical battle and can out think Grodd tactically. Grodd’s biggest weapon is mind control and that ain’t working this match.

Voting for Reverse Flash and Grodd because I want a battle of Flash villains for the finals.

This is shaping up to be a major throw down! #gogrodd #blackadambomb

Reverse Flash vs Black Adam would be such a great battle!! I start think of 10 ways one would win, but then realize 10 reasons the other would win!

For me, it’s kind of a no brainer between Grodd and Brainiac, since Grodd can’t telepathically influence androids, and any physical migth Grodd has is useless compared to Brainiac being able to rebuild itself.
However, it’s a coin toss between Black Adam and Reverse Flash for me. In the end though, Reverse Flash needs either multiple good hits or an extremely good hit, while Black Adam only needs one regular hit and it KO for Reverse Flash.

RF v Ba. Ba wins. This is favoritism and I think his magic can beat. He beat the anti monitor so let’s see this.

Brainiac v Grodd- Brain wins. He outsmarted him in injustice he can definitely beat him.

For me I feel like BA is just too strong for Reverse Flash, one solid hit and it would be over, however Thawn could definitely make the battle interesting with his speed but in the end I’d have to go with BA. I don’t know for sure but I’m not sure Braniac would be affected by Grodd’s telepathy, if that’s the case it would be a no brainer, pun intended lol!

The injustice storyline was the first thing that came to mind for me as well when I saw Brainiac vs Grodd!!

I’m glad everyone else caught that! I had to log the Brainiac/Grodd Injustice dynamic in my match-up breakdown. This is settled law.

As much as I love the games, I would hesitate before citing Injustice as a source for something like this. The first game’s story had Green Arrow beating Wonder Woman and Black Adam in quick succession. He didn’t even pause to catch his breath. While GA is my favorite DC hero, I would never pick him to win a fight against either of them, just because he did in the game.

Also, even looking at Injustice 2’s Grodd/Brainiac dynamic it isn’t as clear cut. Sure, Grodd was biding his time, but it wasn’t just doing so out of a reluctance to fight Brainiac, he was also trying to use Brainiac to destroy his other enemies. Engaging Brainiac early would have pit him against Batman, Superman, Wonder Woman, Black Adam etc.

Really the Injustice games are first and foremost a roster of characters that Netherrealm wants to use, or is told to use by DC/WB. The story mode is just a fun way to stitch together those characters who primarily exist for vs mode. It’s not narrative gospel.

Instead, I would like to counter Injustice, with Justice. The series, by Jim Krueger, Alex Ross, and Doug Braithwaite depicts the Grodd/Brainiac dynamic as the exact opposite of Injustice 2. Where Brainiac is going to betray Grodd, but needs to wait to find a way to counter him.

Also, in this tournament, I have no doubt that Grodd has been scanning the minds of Maxwell Lord, Vandal Savage, Talia, and Ra’s al Ghul. He’s been analyzing all of their strategies, learning from their mistakes, and coming up with the ultimate plan to fight Brainiac.

Just fed Brainiac some data on the tournament and he came up with some interesting facts.

), he told me if you get at least 75 points you will. Depending on how the semi-finals and finals go, I just might “pass.”

I also thought it would be fun if us, the players got villain titles depending how well we picked our brackets. I made a separate topic below as I wasn’t sure if it was too far off topic being posted here and want to follow the community guidelines.

My opinion: this whole thing will be between Thawn and Brainiac. Why? Because they the most OP villains from two of the most OP heroes.

This made me laugh. Despite my Lazarus Pit knocks and popularity win frustrations (Catwoman?!), I am currently in the strange position of potentially ‘passing’ as well. I’m not there yet, but I have somehow managed to get both of the stronger picks–in my opinion–in each semi-final match. If they both win, and then if my ultimate champion pick takes the final victory, only then would I pass. But technically it could happen. Honestly, just getting the ultimate champion pick ‘right’ would feel cool on its own…