Did Batman ever avenge Tarantula's assault on Nightwing?

I have never heard it mentioned on the internet. But various pages say that Grayson’s been raped multiple (!!!) times. In under the red hood batman mentions breaking every bone in Joker’s body because he killed Todd. Was there anything like that for any of Grayson’s assaulters?

I think she got away with little more than a scolding. I’m not sure the scene was meant to be portrayed as a rape or if rape is even an accurate description of what happened, but I can see how many people get there. Regardless, I don’t know that the writers saw it that way and therefore saw the payback as necessary.

Gail Simone killed her off in Secret Six…it was very cathartic.

Tarantula got some meta-payback courtesy of Gail Simone, but nobody ever directly called her out in-universe and nobody but nobody did anything about Mirage as far as I’m aware.

Mirage was raped by faux-future-vampire Nightwing, right? It’s been awhile.

For a series that amounted to a giant nothing in terms of impact to the overall DCU, Team Titans was actually pretty good.

Oh, I didn’t know about that. That makes the whole thing even uglier. I was referring to her rape-by-fraud of Dick by posing as Kori.

@BatWatch, what happened to Dick by Tarantula was absolutely rape. Dick was suffering through severe trauma at that moment, Tarantula took advantage of him, and ignored him several times when he said “No.”

The worst part of it is that when questioned about it, the writer, Devin Grayson, said that she didn’t believe it was rape, just “non-consensual sex.” I lost pretty much all respect for her as a writer and a human being after that nonsense. 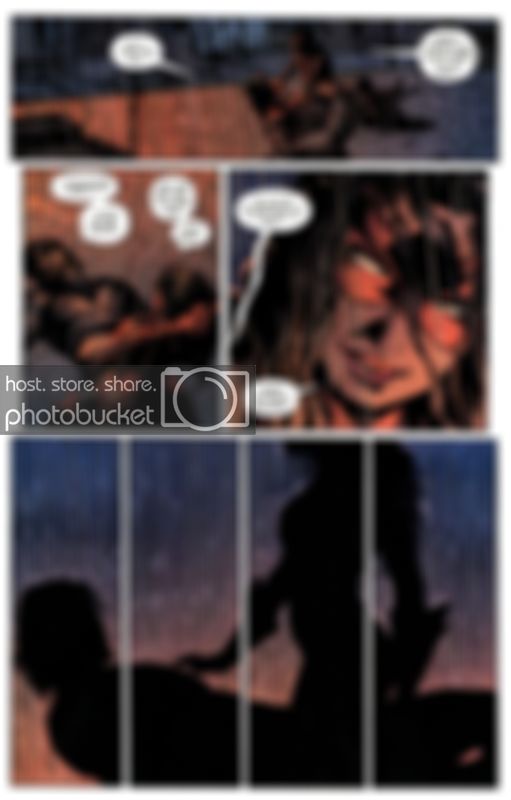 Oh, I don’t remember that. Not sure I read it.

I seem to recall some sort of creepy alternate future Grayson trying to get handsy with Mirage in an issue of team titans, but I don’t remember specifics. Might try to find it.

The impersonating Kory thing is way not cool. They actually had sex?

Okay, you are right. I haven’t read the issue since it came out, but I skimmed back through the issue and he appeared to be in a diminished state and the whole, “Don’t touch me,” line really sealed the deal on the rape allegation.

It’s a shame that Devin Grayson said those things. I really enjoyed her work on Titans. I read some of her comments and she seems to have later have overcompensated to lecturing about how it was wrong (which is true) and blaming “rape culture” which I don’t agree is a thing. Seems like she was trying to walk back her original comments and went to the other extreme.

@BatWatch: My knowledge of the Mirage incident is second-hand, but I distinctly recall that being the case. I’ll see if I can figure out which issue that was from when I get the chance.

@Jay_Kay and BatWatch: I keep wanting to make some excuse for her because her Titans was fantastic and even the Nightwing run had some good ideas to it. But even in some of the better parts, I just couldn’t enjoy it after that.

I looked up both Nightwing Mirage situations. Team Titans seems to be on DCU in its entirety.

Mirage was ostensibly from a possible future where she and Dick Grayson became lovers and fought against a tyrant overlord. Mirage got teleported into the past. It was in the second issues of Team Titans that it was revealed Mirage impersonated Kori to have sex with Grayson, and the scene was played as a joke. Later future Nightwing also got teleported into the past, but at some point (perhaps due to manipulation by the evil overlord character. I don’t recall) he had been turned into a quasi-vampire man-bat the person creature calling himself Deathwing. He shows up and starts to make out with Mirage in her bedroom with him gripping a knife behind his back as issue 9 ended and then when we next see Mirage in issue 10, she says they had sex and then he tried to kill her. Not clear exactly the nature of the sex beyond that.

Lot of weird sex stuff for a series that barely lasted two years.

And Spoilers for a twenty-five year old plot line Zero Hour, it turned out all the Team Titans were fabricated from a fake reality to be warriors against the heroes in the Crisis in Time. Except for the more popular characters of which Mirage was one who turned out to be people from the regular timeline brainwashed to believe they were from another timeline. How is that for convoluted. Always wondered if that was planned all along or retconned.

There seems to be lots of weird rape stuff with Nightwing. https://www.cracked.com/article_19786_the-6-creepiest-sexual-encounters-in-comic-book-history.html

I dunno if creators have it out for him or it’s some sick play off of his sexiness. But I’d like to see Batman address the sexual assault of his children. Well, not like to, but since they brought it up.

And yeah, while I otherwise am enjoying Devin’s Nightwing story, that scene does haunt it.

And the Kori thing sounds familiar . . .

Throw in that Batman was also raped by Talia and that is a conversation.

@DGWJTWTDW I’m also about 90% sure Talia also raped Jason in Red Hood: The Lost Days. I mean, they don’t say it, but 1) I doubt he was 18 2) During Under the Hood, I think he was still high on pit juice and would have been during the sex scene as well and 3) she had manipulated him into hating Tim and Bruce and had funded his revenge training journey. None of that makes me believe he was in his right mind or that she wasn’t manipulating him to her own ends, even if he was legally an adult at the time.

There are a lot of things I like about Morrison’s run on Batman, but having Talia do that and how he warped her character in general is the part I absolutely despise.

Yeah, Morrison’s handling of Talia was so bad I kept expecting a twist revealing who was actually behind Leviathan at the end of Batman Incorporated. I didn’t think such an esteemed Batman writer would miss the boat so hard with Talia. It was at the end of Batman Inc. that I began to think we had a bit of an Emperor’s New Clothes situation with Morrison.

@Aneras713 Jesus! Poor Batman. That’s half of his sons. Ever wonder if he let Drake go uneducated on sex (that infamous panel) and lets Damian be violent because he’s hoping they’ll avoid the family fate?

@DGWJTWTDW Tim Drake was almost sexually assaulted too, but his sister Cassandra Cain saved him.

@Aneras Do you remember where that happened?