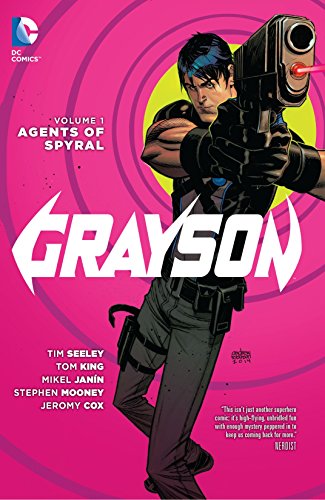 Hey, @DickGraysonClub! Sorry for the delay! @A1waysAJ and I thought it’d be better to wait for August 1st so we could have the entire month for our next event instead of ending halfway through it now that we’ve moved to month-long events.

I hope you guys are excited because we’re going to be reading Grayson #1-11 and Grayson Annual #1 this month!

Once he was Batman’s partner, now Dick Grayson is an agent of Spyral, on a secret mission to take down the organization from within.

If you have any questions, feel free to message me (@Nightroia) or @A1waysAJ

OMG I’m so excited!!! I’ve been waiting for the right moment to do this series. Honestly, in my humble opinion the best series to feature Dick Grayson. I mean, I love him as Nightwing but this series was just written so well and the quality was so consistent…

This is by far one of my favorite runs with Dick Grayson as a character. I loved how much fun he had as Grayson. He seemed so free from his past. The art was a special treat throughout the series. I think the extra characters from Spyral were wonderful. It is the most fun I’ve had reading a comic in a very long time!

Looking forward to looking back at the adventures of Juan and Julio.

If DC Universe ever wants to make a Titans spin-off, here’s the place to start.

y’all know how I feel about Titans and considering what this series did for the character, yknow showcasing Dick as a person and letting his personality shine through without a mask and as @BatmanMazz said freeing him from the past of New 52 this would be a perfect

I completely agree with you. I happily own the entire series and I will have to buss them out again to reread with everyone!

I bound my comics into one volume. I actually just read it this morning. I love getting it out to read. I don’t do it to many books unless it’s something I read a ton. It’s brilliant! 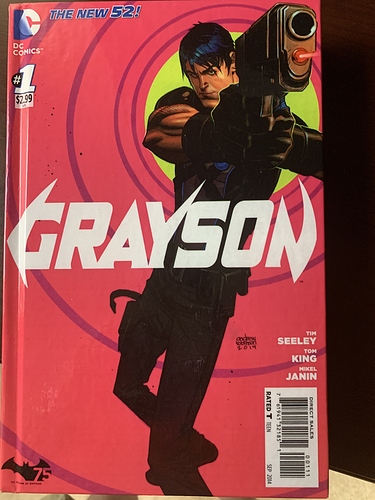 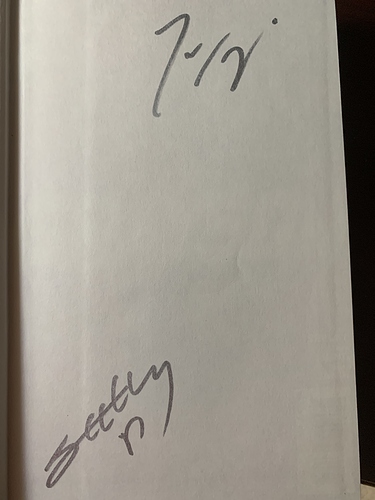 Omg you even got Seeley’s signature??? That’s so cool!

Yeah, he was one of the nicest people I’ve ever talked to. It was an amazing experience. I had a bad experience with Tom King at the same convention. Don’t know if it was a bad day or had a bad fan experience, but he was rude to my nephew who was getting a Batman comic signed. I don’t want to get into the whole story, but it really soured me on him.

I’m sorry to hear that. I hope that wasn’t your nephew’s defining experience there. I’ve wanted to go to a comic-con convention for years but have just never been able swing it for one reason or another.

He actually hasn’t gone to another con since that happened three years ago. He luckily has started up reading comics again, but he was extremely discouraged after the experience.

I’m glad he’s coming back around I hope that he never endures something that would push him away from something he loves again.

Okay, just finished re-reading this set for the first time since the series was running. The issue wear the college girls chase him around the school is most definitely one of the better issues. And the one issue titled: “The Gun Goes Off” has one of the moments where I was like “I know damn well they did not just…

YAASSS!”
It’s brought a lot back for me. And brought so many new things. To answer the question:

What do you think of this new(er) spin on Dick’s character?

It’s weird (not really) but this isn’t much of a stretch in my opinion. I mean, it’s exactly who the character should be. Taking him away from the Batfamily was the best thing they coulda did because without those connections his personality was able to shine through. He might not be wearing a mask or going by Nightwing in this series but his character hasn’t felt more rich in any of his series. For some reason adding a mask and keeping him in touch with the Batfam causes writers to make him more serious and less of a performer. As it was said in one of the issues, “The bigger the talk, the more dangerous the stunt.” And his performance doesn’t stop at just his personality which leads me to the next thing:

What did you think of the art for this series?

Artist Mikel Janin even expressed his performance in his body language and the way he moved, what he wore, what he didn’t. My biggest thing especially with art in comics is CONSISTENCY which he brought in every panel. Every panel had something to catch your eye. Everything was so sleek and down right sexy. Not only did Seeley show off Dick’s personality and heart (like in the dessert issue with Tiger and the baby which was another great issue) in this series but Mikel Janin CAPITALIZED on his sex appeal. It’s a shame none of these things were brought over when Seeley moved onto Nightwing Rebirth. Still good but still missing that spark Grayson has.
Somebody needs to take Dick’s personality, heart, and sex appeal and translate it into Nightwing ASAP. The only thing that wasn’t featured in the series (mainly because it didn’t exist at the time) is Dick’s taunting. I will remind everyone every chance I get that the chemistry Nightwing and Penguin had in GCPD Lockdown was amazingly hysterical. Nightwing’s taunting “CoS wE jUsT gOt OuR aSsEs KiCkEd” took me all the way out! So somebody needs to takes all theses things and be like yes, this is Dick Grayson, this is Nightwing and translate it into his superhero identity IMMEDIATELY.
I’m really looking forward to re-rerading the rest of this series.

Taking him away from the Batfamily was the best thing they coulda did because without those connections his personality was able to shine through.

I love Dick interacting with the Batfamily, but I definitely agree. He got to be himself (well, as much as he could while undercover), which is really great to see after everything that happened.

I loved how much fun he had as Grayson.

It’s really funny you mention that because I was going to say the exact same thing. The whole series (well as far as I’ve read at least) feels so fun to me, which is a nice change from all the seriousness that is usually seen in Batman and Batman-related comics. Plus, the art is amazing too.

I also really enjoyed the scene where Dick is talking to Bruce and starts talking about a memory. It is so heartbreaking because you know he just absolutely misses everyone and probably feels so alone, and I’m glad Bruce let him talk and reminisce. I love seeing scenes between the two like this one. We really do need more of them.

I completely agree! The series only gets better! You should definitely check out the rest!

I’m WAY behind on the reading, as per usual, but one thing I do want to shout out even though it’s not on the reading list is the Grayson: Future’s End one-shot. It’s from what I’ve seen the first issue that was fully scripted by Tom King, and it has a really interesting structure, where it starts at the end, and ends at the beginning, if that makes any sense. A lot of the tropes that you would expect from King kind of start here too.

I’m just saying that if you’re done already and skipped this issue, give it a shot, it’s really interesting in what it does structurally and what it says about Dick as a character.

This may be common knowledge, but the story that Dick tells the baby in the desert in Grayson #5 Is from the famous Silver Age story “Robin Dies At Dawn” in Batman #156. 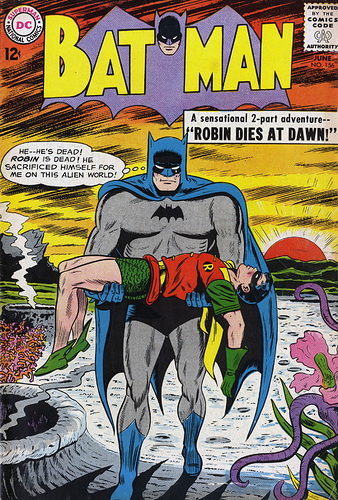