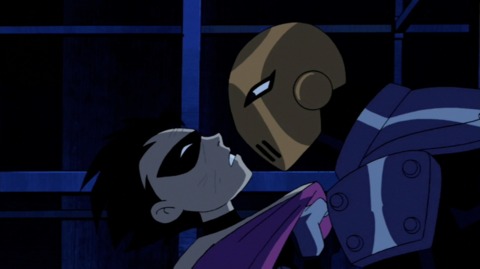 What’s up Wingdings, Wingnuts, and other Dick Grayson-themed nicknames! This week we’re going to mix it up a bit by watching an episode for this bi-week! What episode you ask? One of the greatest (in my opinion) Robin episodes from the Teen Titans cartoon, Haunted.

Ever since the Titans’ final confrontation with Slade, Robin has been haunted by one question: Is Slade really gone?

If you have any questions, feel free to message either me (@Nightroia) or @A1waysAJ .

Oh yeah… he definitely needed some therapy. If it was my friend I would expect nothing less than what I would do, smack the living crap out of me and tell me to get it together… then take my ass to therapy.
I had no idea who activated the mask at first but my initial guess was Slade because well… comics - even when they should stay dead they’re always brought back.

When I was a kid I thought it was Slade’s ghost. I also was terrified of this episode.

@RobinTTS6 It really was a freaky episode. Especially if you close your eyes during Slade’s speech in the basement. It gives you even more icky feelings.

I haven’t actually seen the episode before. I had watched a few of the Teen Titans episode, but it wasn’t very many of them. I’ll have to check them out now that I have access to them.

Adam Beechen wrote the episode!? I didn’t know he wrote episodes of the show. I always thought he was an underrated writer.

When I saw the smoke or dust come out of the mask, I thought maybe it was the Scarecrow coming out to Titans Tower or Slade using Fear Toxin to make him see things.

If I had seen one of my friends seeing one of my dead villains, I would definitely be concerned about his well-being. They would have to realize as young adults that mental health is something that affects all of them (which was something George and Marv always focused on during their time on the title.) Plus, as comic book villains, you know that they don’t tend to stay dead so in the back of your mind, you would want to help your teammate stop them. However, once you realize he’s hallucinating you want to help your friend too. You want to help them before they do something to hurt themselves or others.

I definitely think he needs to talk to someone. You don’t want to see a friend upset and bothered so deeply by something. Slade’s mind games had always been a part of his MO so how deep those scars are something to be worried about if you’re supposed to lead a group of people.

I really enjoyed the episode. It was so sad to watch Robin going through this.

@BatmanMazz One thing about the original Teen Titans cartoon is that they weren’t afraid to get into the darker stuff. I remember enjoying that as a kid, especially Raven’s arc in season 4 (if you haven’t seen it, it is amazing). I don’t know how much you’ve watched, but they dive into stuff like racism, insecurity/loneliness, bloody family vs. the family you choose, disabilities, and probably a bunch of other stuff I’m forgetting. It’s a really great show, and I highly recommend it.

@Nightroia I appreciate all the great recommendations! I will definitely be checking the many seasons of the show!

who did you think was behind activating the mask and why?

It seemed very Scarecrow-like, but I didn’t think he’s be a big bad in a Titans episode, so I wasn’t sure what was going on.

If it was your friend who was hallucinating a villain you had seen die, what would you have done?

I would call an ambulance and let them take him in for a psych eval.

Do you think Robin needs therapy after this?

Well, really, I think every member of the Bay family could use some good therapy, Dick Grayson being no exception.

Well, really, I think every member of the Bay family could use some good therapy, Dick Grayson being no exception.

Yeah, they could really all use therapy. I definitely think this version of Robin could use therapy after every dealing with this version of Slade. He just gives off such creeper vibes, especially with his voice. There’s also psychological torture Slade puts him through almost every time they interact. The main one that comes to mind is making Robin work for him and fight his friends so Slade won’t kill them with that nano-technology he infected them with.