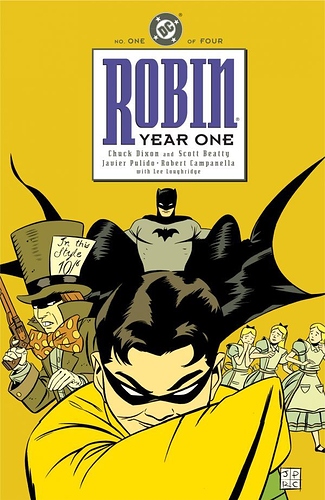 What is up, my fellow Birds! The stars have aligned, and the start of our club happens to coincide with Robin’s 80th anniversary! For our first reading, we are diving into Robin: Year One, which you can find here! After reading it, we’ll discuss!

Thank you all for joining our club! We’re gonna make this a rockin’ Robin March!

This was one of the first series I read (right after Teen Titans: Year One back in like 2010), so I had a feeling of nostalgia while reading this.

Starting with Alfred’s narration of the story, I loved seeing the partnership between Dick and Bruce from Alfred’s point of view. The ease and comfort between the man and the boy were smooth and realistic, and it was exactly what I like to read about the relationship between the two. 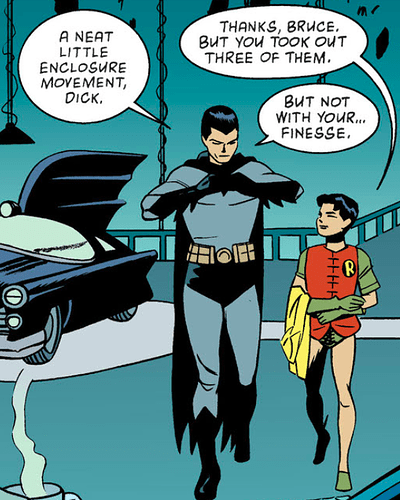 I also love the banter between Dick and Alfred and Bruce and Alfred: 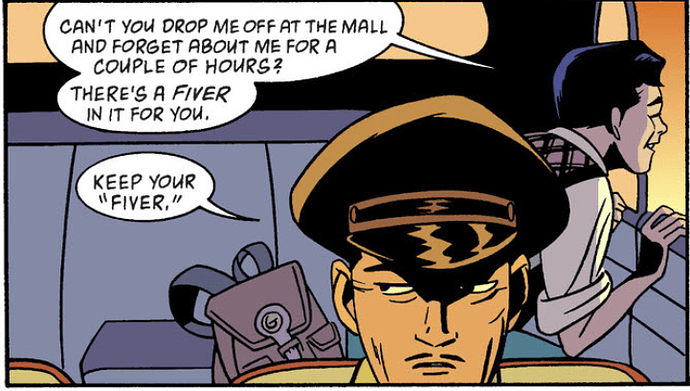 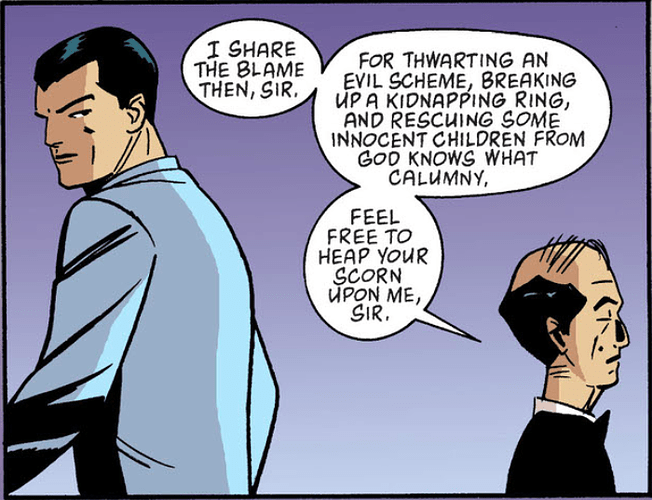 This series was also I believe the only time I have read a comic with the Mad Hatter, and I think it was a great choice for the introduction of Robin before moving on to more serious villains like Two-Face. The moral dilemma of having Dick, a child, as Batman’s sidekick is definitely more of an issue today than it was when Dick was introduced in 1940, and I think that was the perfect plot to address in the latter half of the series.

I think it was a great learning experience for both Bruce and Dick while their partnership was still somewhat new, and I can only imagine how this incident would shape Dick’s perception as he grows into Nightwing.

Overall, I really enjoy this series (both for the story and the nostalgia), and I am so glad we got to do this for our first discussion, and on Dick’s 80th anniversary! I hope you all enjoyed it as much as I did!

There is so much more I could discuss, but I would like to leave stuff for you guys to bring up.

As I griped about the last time we did this book in a club, it appropriates some of Jason Todd’s stories and gives them to Dick when Dick already had 40 years of Robin stories to provide inspiration. That said, it’s not bad.

For me, the best post-Zero Hour story set in this period of Dick’s career was The Gauntlet.

I read this for the first time fairly recently and I liked it a lot, especially the artwork. And it’s fun seeing the Dick as a child. After so many years of Nightwing, I like going back and seeing him when he was young and more innocent.

@AlexanderKnox, after Jason straight up stole Dick’s origin story, I have no problem with Dick taking some elements from Jason. Turnabout is fair play!

Lol I always forget Jason originally had pretty much the same backstory as Dick.

The big difference is that Jason’s acrobatic parents died trying to help the heroes…and they were eaten by crocodiles in the zoo, so their career choice was ultimately pretty irrelevant.

He swiped it along with Batman’s tires.

I also read this pretty recently for the OG Book Club, and remember liking it well enough, though I feel like it was sometimes a little too cute with future references. Like what is even the point of the Joker scene other than to imply he’ll kill a Robin at one point – and not even this Robin, but the one after him?

It’s still not as bad as Batgirl: Year One, where Babs practically rolled out a wheelchair and said to the readers, “You get it? Huh? Huh?”

“I wasn’t inspired by Batman. I was inspired by my hero, Black Canary! O, how I wish I could work with her every day!”

Anyway, I think it’s worth noting again that Chuck Dixon wrote two stories called Robin: Year One (one being an annual for Tim’s Robin series), and Max Allan Collins wanted to call his new Jason origin story by the same name before Denny shot him down.

Max Allan Collins wanted to call his new Jason origin story by the same name before Denny shot him down.

That’s interesting. I didn’t know that.

We’ll be getting into a lot of that with my next two club sessions, which will be heavy on the Collins and Barr runs. (The latter run is a favorite of mine. The former…not so much.)

Anyway, back to talking about Dick.

I pretty much agree with everyone! I love this story! I love the banter. My favorite was the Hatter story though, I’ve always loved Mad Hatter and just found him interesting. They never seem to use him correctly but I really liked this story. Hatter is actually my favorite Batman villain with Scarecrow coming in second and of course Joker at number 3.
What I love about the art though was the colors. It was so colorful and lively! But it was also simplistic and detailed at the same time.

It’s still not as bad as Batgirl: Year One , where Babs practically rolled out a wheelchair and said to the readers, “You get it? Huh? Huh?”