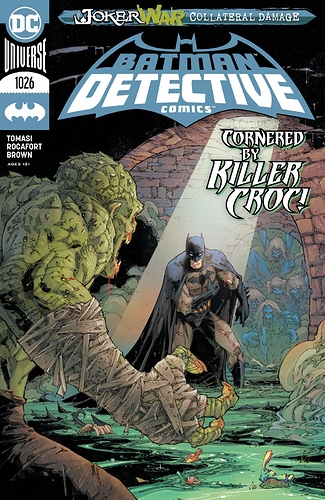 'Detective Comics #1026, Batman learns there have been unexpected casualties - and the Joker’s insanity has unwittingly created a new Monstertown in the sewers beneath Gotham. It seems the Joker’s clowns, looking to spread some joy, hit Ace chemicals and flooded the place with toxic chemicals. It all flooded down into the sewers - where a gang of conscientious objectors had hidden for safety away from the war between the Jokers and the Bats. They were all soaked in the chemicals and would have been drowned if not for the intervention of Killer Croc, who had also sought sanctuary in the sewers. Hideously mutated, they became Killer Croc’s new people, the first citizens of Monstertown, and Killer Croc declared himself their mayor.

Croc tells them to stop and he waits for Batman to come up for air. As he does so, Batman tosses Batarangs and shock emitters, taking the gang members down. Croc challenges Batman to a one-on-one battle, stating that if Batman wins, he can take everyone in. If Batman loses, he leaves with the kidnapped individuals. The combatants go back and forth before they both go for one final blow and Croc lose.
At Arkham Asylum, Batman is getting Croc and his gang settled in their cells. He promises them the best of care, including a reversal of their conditions, if a cure can be found. Before leaving, he goes and sits with Croc. He thanks him for honoring the deal. As they shake hands one last time, Batman addresses Croc by his real name – Waylon.

P.S. Poor Croc he got his second chance until joker war ruin everything for him. Croc save people from toxic waste and protective them for outside.

P.S.S. Again Waylon work so hard earn his second chance only reason why because his relationship with June Moone he thanks her spending time with him and not treated him like monster. If June is here she be Waylon side No matter what he do right or wrong If I remember she tell him She can’t live without him.