Designate a team that might be able to take down Dr. Manhattan

I think you have to hit Manhattan emotionally and through altering reality. Get miss Martian in his head, get him off balance by looking into sorrow’s pocket hell reality, then let the reality warpers have at him. The lantern can provide security and muscle as needed- since Manhattan has some difficulty with lanterns. Firestorm should be there because Manhattan singled him out for extra special attention, there must be a reason for that.

Who’s on your team?

I’d add Saturn Girl to the above mix. I hope we see her in action in the finale of Doomsday Clock.

Mxyzptlk is an interesting choice. I think you need characters like that, that borderline break the 4th wall, to defeat Manhattan.

For that reason I’d also want Ambush Bug, Bat-Mite, and Mr Nobody on my team.

Add Nix Uotan to my team

I like that some people are using villains on their teams because with a threat like Manhattan you need all hands on deck.

Darkeseid, omega beams need i say more
Captain Atom, need the prototype to beat the doppelganger
Mr. Majestic, a superman who has no problem killing
Constantine, would make any deal to get the job done
Psycho Pirate, need someone to get into Doc’s feels
Ozyamndias, check out the big brain on Adrian
nightwing, doesn’t have to do anything, but he does have all the plot armor
Random green lantern, never hurts to have one of these around

I think Dr. Manhattan should be defeated by a combination of the “action heroes” from Charlton Comics, especially when you consider it was these same heroes who inspired the Watchmen.

Throw in some other Charlton Characters – Judomaster, Son of Vulcan and Punch & Jewelee (the inspirations for Mime and Marionette) – and you’ve got yourself a nice team. Perhaps a post-Rebirth/Doomsday Clock version of The L.A.W. (Living Assault Weapons)? I always thought this team had potential and seemed like a natural fit. The miniseries also introduced one of my favorite looks for Captain Atom. 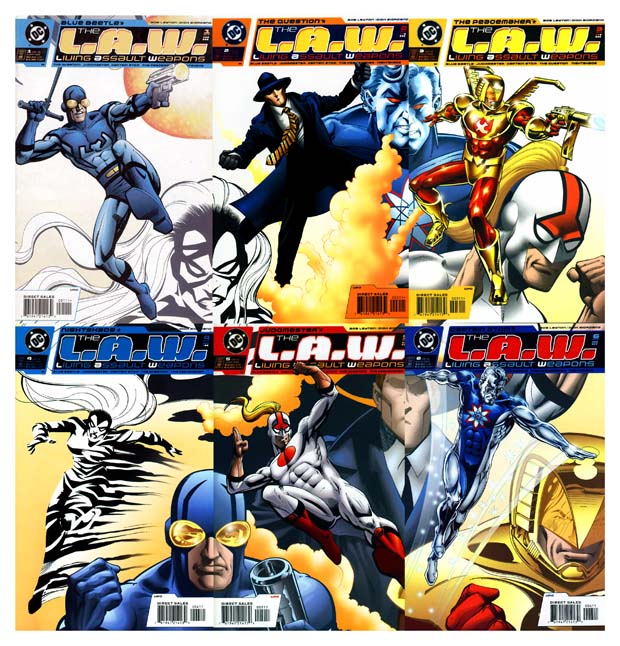 JSA and Legion of Super-Heroes along with Wally and family for taking them out of the picture for so long along with Wally losing his family. Add Tim Drake for his time in prison after his “death”, Doomsday, Jorel (Mr.Oz), and Future Tim Drake. Along with every incarnation of Superman that he messed with. And heroes that died in Heroes in Crisis crossing veil one last time with chance of coming back to life. And that would be one passionate Royal Rumble for life.

Batman could destroy Doc Manhattan all by himself… … … Given the proper amount of prep time of course. SARCASM

Although, I honestly believe the only character who can take down Dr Manhattan is…well…Dr Manhattan.

Hmmm… I think these teams are really quite good! Personally, I would omit Mr. Mxyzptlk. He’s certainly powerful enough to rival Dr. Manhatten, but getting him to work with a team of heroes is almost impossible. His obsession with causing chaos could easily throw a wrench in any plans of taking the good doctor down.