I am a person that believes in character over PC politics. I haven’t read New Frontier, but if the character is prone to such language and it isn’t just thrown around carelessly by creators, then I can excuse the use.

The B-word is still used today against women, isn’t that just as offensive as the R-word? The N-word ending with an A is still used by black characters, isn’t that offensive (I don’t believe in the “our word” defense)? If a character cares little for society and rules, why would they care if a slur is used?

Dr. Psycho used the C-word in the Harley Quinn show and, yes it was bleeped, but it was still referenced. There’s ongoing jokes around it. BUT it fits the character and it promotes the narrative forward.

I understand that some of us are sensitive, but as long as the creators aren’t just throwing it around without analyzing how necessary it is and without malice of forethought AND as long as it builds character and supports the narrative AND there’s a clear positive message in its use, I don’t see why a derogatory word should be taboo in fiction. If any censor is to be applied, just use symbols like when the F-word is dropped. But I don’t believe a character should mince words if it’s part of who they are.

I write fiction and I have used the B-word (against women) and S-word (slur for Mexican). I’d use the N-word if it moves the plot forward and establishes or builds character, in short, if it’s justified by the narrative.

I am a person who completely understands that fiction is its own reality. Just because my character is a racist or sexist or any other kind of bigot, it doesn’t mean it’s socially acceptable in real life. I’m an adult and I know what is right and wrong. Most of these comics are Teen+, and I know teens know the logic of not using slurs.

I’m not for the use of these words in common conversation. My sibling is a transgender autistic. I’d be angry if someone called them a f** or a q**** or a r*****, but if a book I’m reading or a movie I’m watching calls someone gay a f** because they are a mean-spirited character and it moves the narrative forward, I’ll excuse it for the sake of the art. I’m not going to walk out of a Jay & Silent Bob movie and call someone a porch******.

Now, judging from the panel exampled here, I see it establishing Faraday as a character with no regards toward social morality and legality. I read a Wikipedia entry on his role in New Frontier, which sums him up as an agent capturing metas at all costs, even illegal. So, the use of the R-word tells me that Faraday doesn’t care for the feelings of others, hence the harsh language. Now, is it in context with the narrative? That I don’t know because I haven’t read New Frontier. I don’t know what age rating it aims for and what is the style of language in the rest of the narrative. So, in short, I don’t know if its use here is warranted and justified, based on one panel.

I strongly believe that derogatory language is still game in pop culture, despite the PC call outs. I hear it in movies still. I read it in NOVELS and POETRY (not just comics). Rappers still call women B-words and themselves the N-word. It’s never going to go away because pop culture is a reflection of the society it’s from. While there are still hate speech and bigotries in real life, there will forever be an analog of that society in pop culture. And, I’m sorry to say, evil and hate will NEVER leave our society, no matter how hard we censor because it is a product of ignorance and fear, something natural to our species. And because of that constant, there will always be a representation of that evil and hate in our pop culture.

This isn’t a conservative or liberal stance, it’s the nature of our species. We can get rid of the use of the R-word, but there will still be small sexual organ jabs, physical deformity insults, reading comprehension jokes, and so on. And I personally find each one of those just as offensive as the use of the R-word. If a character can mock another for their weight, then the other character can still call the other an dumba**. It’s not something to be done in real life, but I see it as game in pop culture.

Again, pop culture is a reflection of society, not the standard to follow. So, yes, the use of the R-word can be interpreted as offensive, but so can the middle finger. You may believe that the R-word is worse, but you are wrong in that belief because it’s that kind of thinking which leaves the gate open for more hateful language (yes, the middle finger is language). I’d be just as hurt from a middle finger as I would from being called a r*****. Neither are okay, but they will still be used because, despite the efforts to change and censor, they are still in our society.

Now, a creator can take a political stance and refuse to use that language in an effort to influence society, that’s okay. But we shouldn’t be “disgusted” or outraged if the language is in pop culture, as long as the criteria I established is met. There’s a fine line between artistic expression and hate speech, but there is still a line. There can be use of derogatory language in pop culture without being hate speech. It’s the responsibility of the creator to identify the difference and it is OUR responsibility to understand the art we are interpreting without forcing our political views on the artist. Our society is a democracy, so if the general consensus is that the art is hate speech, then we can have an outcry. But if the logical and educated can recognize the art for what it is trying to accomplish, we should be morally secular enough to excuse walking close to that fine line. It won’t be perfect and there will always be mistakes when an artist goes too far, and then we can call for discipline, but we must not be afraid of artistic expression.

If I can kill in videogames, read ra** in poetry, and see child abuse in movies, I should still be able to read the R-word, S-word, B-word, even N-word in comics, as long as the criteria is respected and it is done responsibly.

I know my views may be considered “extreme” by those who disagree with me, but I’ve studied our society and history and recognize that fine line and which side to stand on. I’m not for hate speech, but I’m also not for oversensitiveness in artistic interpretation. There is no way we can be human AND not offend everyone. This isn’t carte blanche to go ahead and have the Joker drop the N-bomb willy-nilly, but if there is a justified context, I would excuse him doing so.

I’m a pansexual Latino male with mental health issues who aspires to be Wiccan. I state this just in case any believe I’m some entitled straight white Christian conservative male and wish to call me out on that.

Again, no to hate speech. Yes to artistic freedoms. We shouldn’t need regulation and policing if we just interpret with perspective and logic.

Hey folks, lets keep it congenial and respectful in here. I know these sorts of convos can get passionate, but keep our Guideline #1 in mind! We’re all DC fans here.

I don’t think he’s wrong though, it’s character over politics and if a villain uses it, they shouldn’t censor ir because IT’S A VILLAIN. Also most people use that kinda language in real life so even if a hero uses, you shouldn’t be offended, it’s just a word. I have been called nasty stuff before and I know the impact it has, but the thing is it’s a comic book and a character saying something shouldn’t offend you

I’m kind of amused that we have two threads about censorship, one generally in favor, one more mixed/against.

I actually think HQ animated used Dr. Psycho’s drop of the C-word. Was great. We get the reaction shots from Wonder Woman and other observers. We even get the Legion of Doom holding a press conference to expel Dr. Psycho because that behavior isn’t “on par with their standards”. Killing people and causing destruction at city wide levels, we’re ok with that but dropping a c-bomb isn’t on brand. They used it to great effect.

This seems to have gotten a little more heated than I intended. I just want say that I respect free speech and I oppose censorship. My concern was quite possibly misstated. Please allow me to try again. Comic books, being a part of popular culture, can be seen as a reflection of that culture. I’m concerned that the casual use of certain terms reaffirms the notion that those terms have a place in our society. Is this making any sense? I hope I don’t come across as accusatory.

I completely agree that the c-word scene in Harley Quinn was great because it was designed to make a point. That i have no problem with.

I concur that comics are a part of pop culture. However, it is worth noting the example you gave was 16 years old. A great deal has changed in pop culture with word usage or the refraining from the use of certain words during that time.
There has been progress made in this area over the last 16 years. Is it enough? I’d say likely not, but it is a damn sight better than 16 years ago. Not to mention 16 years before that.
So if comics are part of pop culture then viewing them through the prism of the pop culture of their time should also apply.

Wanted to revisit this thread after reading Catwoman: Selina’s Big Score, another book written and drawn by Cooke that sadly features 2 more instances of the r-word being used. Panels are blurred as a tw for the slur 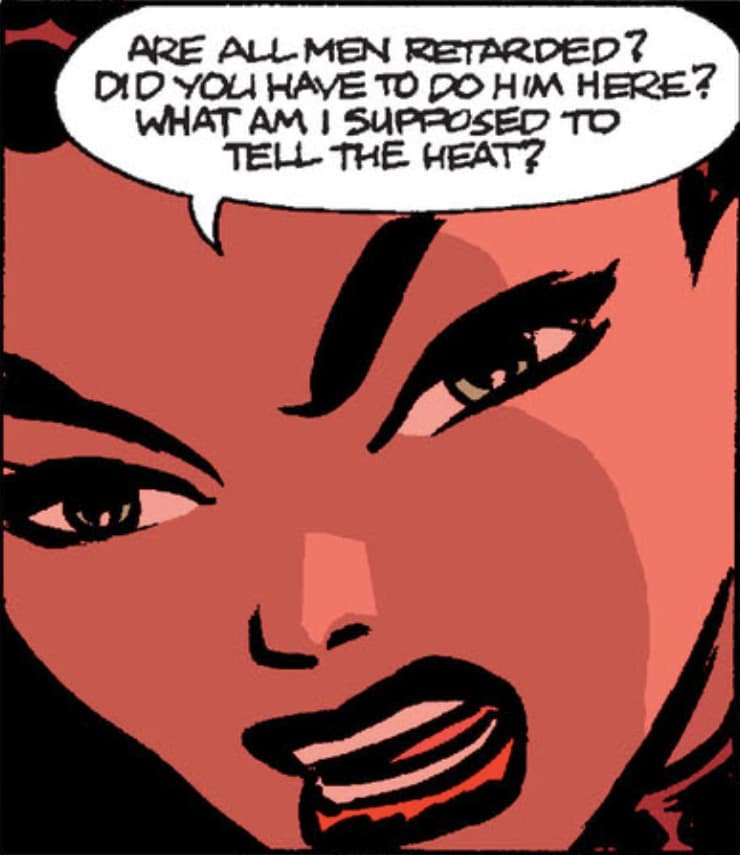 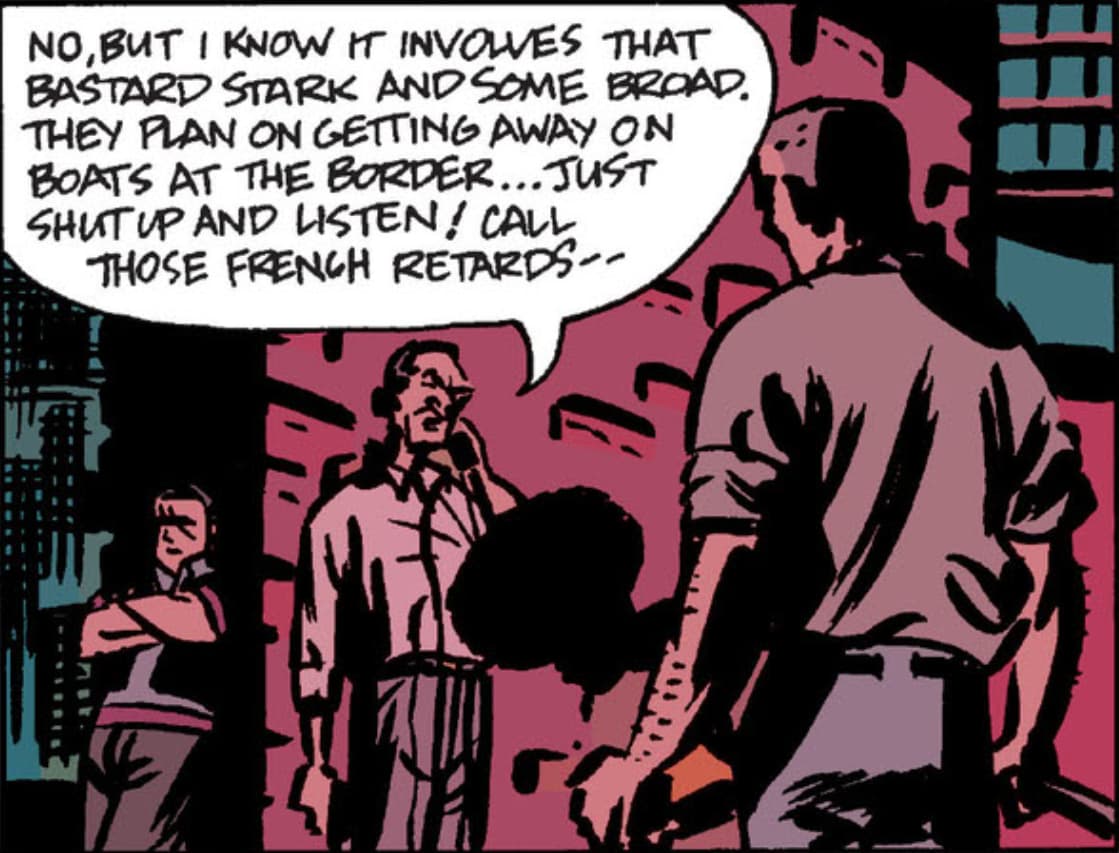 Part of my initial argument does still stand since this was released in 2002, a couple years before New Frontier. But the fact that New Frontier wasn’t the only or even 1st time Cooke used that word does make it look more problematic in this context