December is officially upon us, so it’s time to get to know our new Community Member of the Month! 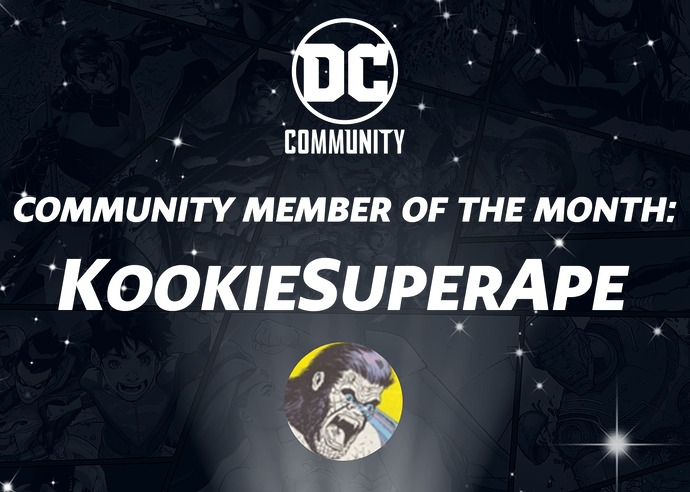 I am very much a newcomer to the world of comics and superheroes in general. For the vast majority of my life, I had little to no interest in superheroes at all, and I was always intimidated by how confusing reading comics seemed, what with all of the tie-ins, crossovers, ambiguous reading orders and footnote references to past issues. With only a few exceptions over the years (Watchmen, The Dark Knight Returns, DC Universe: The Stories of Alan Moore, Sam & Max, Larry Gonick’s “Cartoon Guides”) comics reading just wasn’t a part of my life.

However, in 2019, Steam was running a sale on the Arkham games, which I had always heard good things about, and I had always liked Batman well enough from a distance, so I decided to play them. About halfway through Arkham Knight, this character called Nightwing suddenly shows up, with no introduction provided whatsoever, the game just assuming that anyone playing it would already know who he is. I thought that I was fairly familiar with the basics of the Batman mythos: I certainly knew who Dick Grayson/Robin was, of course, but I had never seen or heard of this “Nightwing” guy before. I was immediately intrigued by his cool name and cool costume, though, and I was determined to find out more.

Once I finished the game, I was still in the mood for more Batman content and I still really wanted to learn more about Nightwing. So, I signed up to DC Universe for two main reasons: to watch Batman: The Animated Series, which I had never seen but which I had always wanted to, since, like the Arkham games, I had always heard good things about it (yes, I actually heard Kevin Conroy [RIP] as Batman and Mark Hamill as The Joker in the Arkham games before I ever saw a single episode of BTAS); and to finally take the comics-reading plunge, starting with Nightwing. Upon signing up, I was immediately overwhelmed by the choice and variety that the vast and colorful DC Universe offered and I quickly realized that there was much, much more that I was interested in reading about than just Nightwing and Batman. I’ve been hooked on comics ever since. 3.5 years of reading later and I still feel like I’ve just barely scratched the surface. My tastes generally tend towards the older and obscure. Name any important comic published by DC over the last 30 years and I probably haven’t read it yet. But I’m getting there, I promise. Slowly, but surely.

Nightwing. He’s the character that got me into comics in the first place. The platonic ideal of a street-level hero, as far as I’m concerned: he has a cool name, an awesome look, and is a great fighter. But most importantly, he’s a good person, taking on the best characteristics of his mentors: the skills, training and determination of Batman paired with the warmth, humanity and hopefulness of Superman. Plus his own natural abilities picked up from a life in the circus, and just generally being a decent human being. He’s the heart and soul of the DC Universe. “The center of a web of heroes”, as illustrated by one of my favorite DC splash pages, from Nightwing (2016) #47.

Currently, I am reading… Namor comics. I enjoy both Marvel and DC, so I switch back and forth between them. This is a Marvel month for me, so, uh, kind of awkward timing to be chosen as DC Community Member of the Month, isn’t it, heh heh.

Are you watching any DC movies or shows?

Not at present, but the best DC show (and one of the best shows period) that I saw this year was “Peacemaker”. Who knew that John Cena was a great dramatic actor who could carry an entire series in the lead role? (Well, I guess James Gunn did.) And does anybody else still have “Do Ya Wanna Taste It” stuck in their heads?

What are you looking forward to most in the DC Universe?

I’m very much looking forward to seeing what James Gunn’s and Peter Safran’s revamped DCU will look like. I’m also curious about that Mark Waid Superman Black Label series that has been teased (though never officially solicited) for what seems like a couple years now. And I’m super stoked that DC’s Golden Age characters are back in a prominent starring role after far too long of an absence. I’m hopeful that The New Golden Age will continue for a long, long time to come.

What books would you recommend to the general DC Community?

Also, an honorable mention to my favorite DC series that hasn’t been digitized yet, DC Challenge. It’s wild and fun in the best possible way and also a pretty good, if unconventional, introduction to the DC Universe as a whole. Well worth seeking out if you can find it.

Congrats to the 2022’s final Community Member of the Month, @KookieSuperApe!

Congratulations, @KookieSuperApe! Very well deserved, your incredible diligence with the huge DC comics availability list is a tremendously valuable addition to our Community!

Congratulation @KookieSuperApe! Love your list of animation shows on currently watching, please feel free to join DC Animated Club, we would love to have you as our member.

Congratulations @KookieSuperApe! You deserve it!

Very happy for you! Yay!

Congratulations @KookieSuperApe! I would never have guessed you are so new to comics!

Cool read list. Definitely have to check some of those out.

Congrats @KookieSuperApe! I was also surprised you have only been into comics a few years. Cool way for you to fall into them!

Who knew that John Cena was a great dramatic actor who could carry an entire series in the lead role?

He is a wrestler, and those skills are easily transferable to acting. Honestly it is a combination of acting and stuntman in a campy show. It really should not be too surprising.

Glad to hear you are reading The Nail books, those are great.

Good luck getting through JLA Act of God. That is the second worst DC book I have read.

Also, extremely in character for him to use this platform for digitization requests