Have y’all seen the way Deathstroke will look in season 2 of Titans??? Can these producers get anything right??? He looks like Deadshot!!! He looked more accurate in Justice League!! Even the shitty CW version looked more like the character. First it was Starfire, now Deathstroke. How hard is it??? Maybe they should check the source material!!!

It was a single shot in a dark room. We cant see any detail and know nothing about the story for the season. Don’t get me wrong, Titans is a poorly written show that isn’t very enjoyable (for me), but don’t sit here and complain about something you know nothing about.

1.) Yes he did, left shoulder in this image. And 2.) This is the only image we have of him, you can’t see his costume and don’t know the story. Don’t complain about something you don’t know anything about and didn’t take the minimal amount of energy to double check for your opinion. 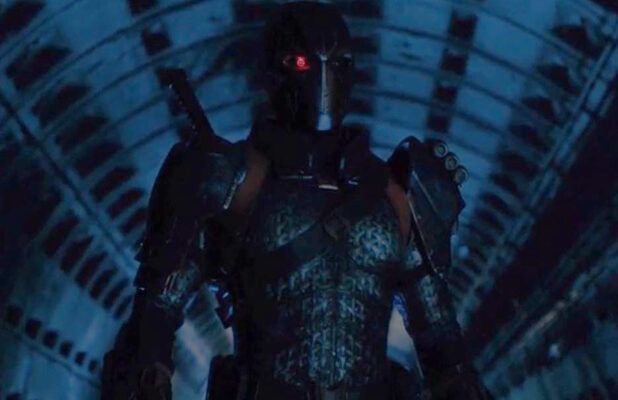 @omnilad, totally agree with you! Some people just jump to wild conclusions.

1.) By saying that the sword is easily missed by the color tone, you proved my point that we can’t see the entire costume and all of it’s detail in this one image; and, thus, we should wait for a more clear image of the character before trying to critique it. 2.) What conclusions am I jumping to? I haven’t made any claims other than one about the sword that I provided evidence for. And 3.) Do you realize how ridiculous and contradictory you sound by saying, “If you have nothing nice to say, then maybe not say anything,”? Like, genuinely, I’m wondering if this is all an elaborate joke. Because, if not, you should really look back upon your comments and realize that you aren’t able to practice what you preach. You have said numerous “mean things” in this post. You claimed the CW costume was “shitty”, you implied that the costume designer’s of Titans are two ignorant or stupid to “check the source material”, and implied they have an easy job when you said “how hard is it” without considering that they have dozens of costumes to design and make. You are either messing with me (in which case, congrats, you fooled me and I applaud your creativity), or are too ignorant to even reflect upon the comments you make before posting them. I’m not trying to sit here and shit on you (as I’m sure you’re probably a great person that is just very dedicated to what they like), but you truly need to look at what your saying or what you believe from multiple perspectives before you say it. Have a nice day.

Also, I realized I may have confused you for the original poster, in which case I’m sorry, genuinely not trying to come across as mean, just really frustrated with people attacking something with no context for the situation. And I’m aware, that some of the points I made, are based on the oc’s points rather than yours. So, feel free to make fun of my confusion and use it as a way to invalidate my points as I clearly didn’t pay as close attention as I should have. It’s understandable.

That’s exactly what I thought he looked like deadshot in that frame. Not feeling it but who knows how it plays out

In all seriousness, try looking at the still from the “15 can’t-miss moments” news article. The cyber-eye looks a little Deadshotty but isn’t the worst thing in the world. The color scheme is there if you look closely, and he’s suitably armed. Costumes are the least of this series’ worries.

I wonder if it’s possible that he is wearing a heads up display via contact lens and the red “eye” serves as a digital data gatherer.

Dude like Taylor said it “you need to calm down”. It hasn’t even came out yet lol.

I think if a one second image of an eye piece is the “worst” thing in a trailer, I’d say that’s pretty good.

Uhhh… it’s the new 52 Deathstroke design. You can even see it here on the app. 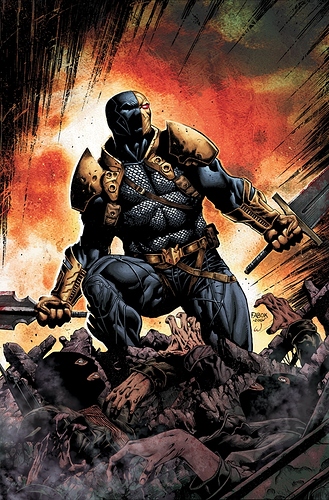 I loooooooooooove the New 52 Deathstroke design. It’s metal. He should ride a dragon.

P.S. I prefer the original helmet with the glam eyeliner, though

Does what side the red light is on matter?

I guess I just care way more about how the show is written, acted, directed, etc. over what side a red light is on. Also, maybe this image was flipped. I know it sounds stupid, but trailers and ads do a lot of weird things in editing to make things a certain way (i.e. Nick fury in the Spiderman Far From Home campaign).

Am I the only person who doesn’t like the CW version of Deathstroke? He has nothing in common with the comic version and is a love sick puppy yelling “SHADO!” nonstop. I only liked him in the later Joe episodes (and they butchered Joe)

Not saying this version will do it better, its too early to tell, but I don’t think there’s a high bar here

I get wanting it to be like the comics as a dedicated fan, but isn’t it fun sometimes to be surprised by a character being a little different for the sake of the world he’s in, and not knowing everything that will happen because it perfectly follows a comic story (i.e. all the characters in the Dark Knight Trilogy or MCU films).

I am excited to see this version of Deathstroke in the Titan DCU. Should be good.

Deathstroke is my favorite character. He suit has taken influence from a number of different versions of Slade. I think this will be the more Comic accurate version that we will get other than any other version we’ve had. I’m fed up with everyone complaining about his light in the right eye, you can already tell they’re being more true to the roots of Deathstroke and his family than he was treated in Arrow. I’m just excited this is the 3rd live action Slade we’re getting in the past few years and he’s gonna be the version I’ve always wanted, or at least the closets we’ve had!