(WARNING - Below this point lies SPOILERS for Deathstroke: Knights and Dragons. If you have not watched Part 1 on CW Seed, do that now and come back when you’re ready! For those who have, the review starts below…)

Deathstroke: Knights and Dragons is the CW Seed’s latest foray into animated DC content, some of it may or may not be connected to the Arrowverse (this isn’t).

Part 1, which consists of 5 ‘episodes’ (12 in total), centers around Slade Wilson and his attempts to balance a peaceful family life with his alter ego as Deathstroke, a violent metahuman mercenary who “sells death to the highest bidder.”

In the beginning, we find Slade as a man who prides himself on keeping his activities a secret from his wife and son, with whom he has formed a close bond through the titular Knights and Dragons storybook that gives the series its subtitle.

But if decades of Deathstroke stories across comics, TV, and animation have taught us anything, it’s that Slade Wilson has many talents. Being discreet is not one of them.

In comes this show’s iteration of Bill Walsh, AKA DC’s Jackal, seen here as a H.I.V.E. Agent who desperately wants Deathstroke to join the ranks of the organization. His solution to draw him out: break into the Wilson household, beat the crud out of Addie, kidnap Joseph and have one of the H.I.V.E. goons hold a knife to his throat.

Again, if you know Deathstroke’s comic history, you know how that one goes…

10 years later, A mysterious message containing what appears to be a new hostage attempt on Joseph’s life from the H.I.V.E. Queen sets Deathstroke on a blood-soaked odyssey in an attempt to atone for his past sins and get right with his estranged family.

Alright, so that’s the gist of Part 1. I’ll spoil some more stuff along the way but now it’s time for the meat and potatoes.

So this is more of a nitpick than anything and some fans might feel differently depending on what interpretation of the character you adhere to, but I’ll honestly state that this version of Slade felt a tad bit off in characterization.

In Knights and Dragons, Slade Wilson is more-or-less portrayed as a mercenary with a heart of gold. Or at least, one with a visibly emotional conscience. He won’t miss a beat when commenting on the atrocities of the people he’s laying waste to.

For those who are more familiar with or beholden to Slade as an out-and-out bad guy, as recently seen in Christopher Priest’s recently concluded Rebirth run on the character and popularized (again) on Titans Season 2, this portrayal feels a bit odd. I will say this: it would definitely feel more lopsided if it were anyone else but writer J.M.DeMatteis (more on that later).

In addition, some of the dialogue and delivery is on the stiff side and unfortunately most of it comes from Sasha Alexander, who’s character Addie suffers the most from both. Also, while understandable, this was clearly made on a budget. Look at the backgrounds for certain scenes and then look at the voice cast. No mystery as to where most of the budget was spent.

Now, for the stuff I loved, and there was a LOT to love…

Once we get past a wonky opening (sans a great-looking storybook sequence), Knights and Dragons comes alive in ways that had me FLOORED!

WB Animation was smart to employ the services of animation studio Titmouse for this production. The action sequences are some of the best I’ve seen out of any webseries since the early seasons of RWBY.

Beautifully-choreographed yet weighty and brutal, it doesn’t matter if he’s slicing and dicing through armies of mooks or going one-on-one with assassins and martial artists, director Sung Jin Ahn lets you feel the full impact of Deathstroke’s carnage in visceral fashion.

Also, what Knights and Dragons lacks in budget, it makes up for in loads of style. Anime-inflected character designs, SpiderVerse-style comic book overtones, and moody noir-ish lighting to highlight dramatic moments, all filtered through Sung Jin Ahn’s equally-stylized direction, helps carry Knights and Dragons through less-fashionable moments in its production value.

A quick word on the voice cast: Michael Chiklis is GREAT as Deathstroke, especially when the script calls upon him to verbalize some of the more comic-accurate moments of his character and he nails it every single time. No, he’s not Ron Pearlman, and I know Manu Bennet’s Slade is a fan-favorite and we just had Esai Morales turn in a scene-stealing performance as the character in Titans, but Chiklis proves himself a worthy addition here.

Everyone else ranges from pretty solid to decent. Again, Sasha Alexander is the weak link here. Colin Salmon, for the very brief time we hear him, is fantastic as Billy Wintergreen.

Touching back on DeMatteis, ever since he’s transitioned to animation (sort-of), he’s displayed a gift for synthesizing elements of a character’s comic book history and presenting the result in a fairly-entertaining package. He did that with Constantine: City of Monsters and I’d argue he does it even better here.

The first five episodes that comprise Part 1 are very much a character-study. Not unlike Priest’s run, Knights and Dragons is a close examination of a very flawed, complex individual who tries (and fails) to escape the darker angels of his nature.

And while it’s a pretty gutsy move to have your main character get handed his butt on a platter in the final minutes of Part 1, it makes sense. The whole thematic drive of this show is seeing Slade try to have it both ways in a very morally gray world.

One final note I’ll end on (and it’s a big one): the reveal of Rose Wilson as the H.I.V.E. Queen. It’s a twist that some may see coming if they put two-and-two together, but it’s still a surprising turn nonetheless (further punctuated by Jericho’s betrayal). Like with Deathstroke, the recasting the Wilson kids (seemingly) as bad guys might not sit well with some fans, but it’s a (literal) cliffhanger that sets us up nicely for the remaining 7 episodes.

If you can get past some of the liberties taken with certain characters, as well as the low-budget feel of the production and some stiff dialogue/delivery, Deathstroke: Knights and Dragons is a surprisingly well-executed piece of adult, action-oriented web animation, which is still pretty rare even at the height of the streaming era.

Catch it here on CW Seed!

It’s a gem of an animated piece so far, i was hooked in an instance, granted I’m a huge slade fan.

Glad that’s been cleared up about the number of episodes.

Yep. That’s actually a thing they started doing as far back as Freedom Fighters: The Ray: Just edit a handful of the episodes into 1-hour chunks.

They definitely learned their lesson from Vixen.

Wow, @BCDC - well said! I agree with so much of your review, even the nitty-gritty details.

Regarding the liberties, I understand the need to simplify in order to set up a fresh take and clear plot line. I’m curious to see where the “mercenary with a heart of gold” alteration will go since it is quite astray from the classic Deathstroke.

I also love the fight sequences! They demonstrate with great accuracy the range in Slade’s abilities, without coming off as too gory, over the top, or even worse - cheesy.

Thank you for the deep research and additional information - we’re all looking forward to seeing more Deathstroke! 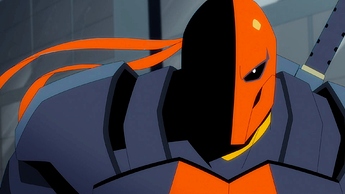 Still no word on when the 2nd episode will be released yet?

No, haven’t heard anything. Not even DeMatteis knows.

In this one respect, I wish Knights and Dragons was streaming here instead of CW Seed, because at least the marketing/awareness of the show would be better.

Ah well. When I see anything official, I’ll let all of you know.