Here to talk about DC’s deadliest assassin. Whether it’s from the comics (past or present), appearances in shows, movies, or videogames, or even talk about art that involves Slade. This thread is dedicated to the one eyed, white hair baddie who will either slice, stab,or shoot his enemies and look cool as hell doing it.

Currently reading Deathstroke rebirth and loving every issue of it 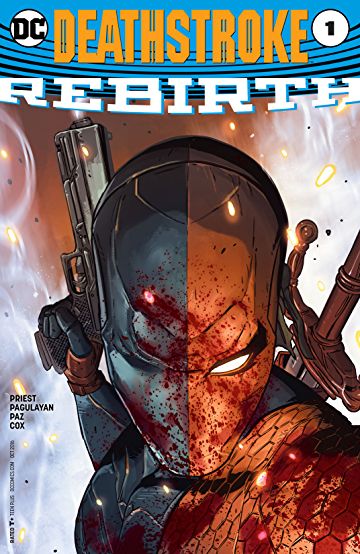 I’m a big fan of the Deathstroke rebirth run. I didn’t care for the Defiance issues that much but overall it’s been an amazing read.

I enjoyed what I’ve read of the Rebirth Deathstroke series. Dropped it after #22 (or whatever the last issue before the first part of Defiance is) and picked it up when the Arkham arc began.

Priest’s run on Deathstroke has been my favorite run of the character since Marv Wolfman’s 90’s series, and I hope the character dynamics established by Wolfman and reintroduced by Priest (Slade’s marriage with Adeline, his friendship with Wintergreen, Rose being conceived through a Hmong woman and not Adeline, etc.) aren’t altered after Priest steps away from the title as I feel like Slade having a family, however dysfunctional it may be, grounds him much more as a character and makes him more interesting than “badass mercenary man”.

I’d also like to see the series go back to a bi-monthly release, since waiting a month in between issues kills the pace for me and I find myself going back and rereading my trades several times just to remember all the plot lines.

@Vroom The defiance arc was pretty good. It showed that Slade could be a successful hero if he really wanted to but since it’s Slade and being an assassin is what he really loves to do we all know what happens with the hero business. I thought Deathstroke Annual #1 was beautiful because it shows Slade reverting back to his ways with a single decision while talking to a Native American cop.

@SenorFrijol I wholeheartedly agree with everything you said.

I like the lil’ bit of Defiance I read. I’ll check out the trades at some point. What’s your verdict on the Deathstroke vs Batman arc?

I enjoy anything Deathstroke in any medium. He’s my favorite villain!

My favorite Deathstroke moment is probably when he takes down the JL in Identity Crisis.

@Vroom I liked it, issue #34 seemed like the finale even though it was the second to last issue in the arc. Had an incredible fight scene and the dialogue between Batman and Deathstroke was fantastic, they had some venom in their words when talking to each other. Some people hated it because the possibility of Damian not being Bruce’s son just rubbed them wrong way but I liked how it screwed with Batman psychologically. I loved how Batman would screw with Deathstroke and that Deathstroke had a back up plan just for Batman. I’d highly recommend reading it just for the big battle leading up to issue #34 because I thought that was the best issue out of the whole arc.