DCUI: What Do You Like About DC Universe Infinite? And What Would You Change?

I guess the Funko Pop thing was before my time, but I got the Kaskade offer in time to “potentially” buy it, but that is so off the mark to any of the members here I know. I had to look up who Kaskade was, and even now, I had to double check it to make sure I was right.
I enjoy the service, but yeah, none of the advertised features have come through.

Chances to win access to exclusive events, DC merch, and more
To my knowledge this hasn’t happened yet. At all. Please correct me if I’m wrong, lord knows I don’t see all that happens on here and I may have missed it, but I don’t recall a single opportunity to win anything.

There were a couple of Trivia Tuesdays where you were entered to win something by participating. One of them was a Flash-themed gaming chair that looked pretty awesome. I don’t know of any other things like this happening though.

Let Them Live! was the one and only DCUI-exclusive comic that we got.

Mea culpa on that one, you are correct. However, a six-issue run of previously unpublished comics doesn’t exactly check the box for “new comic content centered around beloved characters”, in my opinion. “Beloved characters” is a very wide net and I was hoping we’d see some books that featured characters not currently getting their own run in print.

Expecting? Nothing specific. Hoping for…

Hawkman’s Journal
Tales from throughout his many lives - each issue could be self-contained with him remembering a specific battle or event.

Constantine
The grumpy Englishman is always a fan favorite and him dealing with the occult is a never-ending well of stories.

Jonah Hex
Tales from his life before and after the scars would be a fun read.

Atom
I’ve always thought showing his life and battles on a micro level that the rest of the DC Universe is oblivious to would be fascinating.

Super Pets
They have a movie coming out, why not a comic book series showing their adventures to go along with it!

I’d have liked the Constantine idea

And Marvel is doing it with their Infinity Comics. Sometimes I don’t get what is happening here, I love the service because I’m a DC fan, but is like they don’t care much about or there isn’t much values for them. I still can’t believe that I can’t read panel to panel and have the whole page showed and the end like Marvel Unlimited and Comixolgy have had for years.

I still can’t believe that I can’t read panel to panel and have the whole page showed and the end like Marvel Unlimited and Comixolgy have had for years.

I wish, but that is not accurate at all, they forgot about a little thing call IOS, is not available on Apple devices and I happened to read on an iPad.

Not sure if this is the right place to ask this but, when I am reading comics is there a way for it to remember my preferences?

For example, I like to read panel to panel and in full screen mode, but every time I finish an issue it drops me out of these two modes and I have to reselect them when I start the next issue. It just gets a little tedious when I am reading through a series. Is there a way to select these settings permanently? (Sorry if this has been asked before.)

I don’t believe that’s a setting, unfortunately @Row.Harper, but I’m happy to take that down as a suggestion! Thank you

I’ve asked for this feature like once or twice a year since the service started. Now that its comics only it is the biggest missing feature imo.

Hey everyone. How about improving search functionality? Maybe we can index more data on comics so that when I search for tom king i don’t have to deal with a bunch of aquaman comics mentioning king Arthur. Being able to searvh by field (author, artist, etc.) Would already be a good start.

Understandable. I’ll get that passed along.

On the Android app, comics with extra-long titles do not display the issue numbers, making it difficult to tell what issue you’re looking at. For example, I was trying to find a specific issue of Who’s Who, and the only way that I found what I was looking for without checking each and every issue was by luckily spotting the character that I was looking for on the cover.

Hopefully this can be changed in a future update, so that all series always display issue numbers on both the series page and the issue page. Thank you.

That’s a great callout! Thank you, I’ll be sure to jot that down

I’m sure it’s already been mentioned, but I wouldn’t hate a windows app/reader. I use my surface tablet to read comics, and I have to use the browser, which is… not ideal. But I cope.

However, my biggest pain point (which I’m sure has ALSO been mentioned in 500 posts), which is shared with the android app, is that when I’m looking at an individual issue, there’s no “Previous Issue/Preceded By” and “Next Issue/Followed By” button or link - only an “In This Series” section which has a somewhat random selection and may or may not include the previous and next issue.

It’s frustrating when I have a good idea about when a particular storyline occurs, but I miss the starting issue by one or two, and have to initiate a whole new search to try to find it.

It would also be nice if there were an indication of a particular issue’s location in either an internal storyarc (like, say, “The Human Race” from Wally!Flash) or in a crossover (Like “Three of a Kind” in Green Lantern, Flash and Green Arrow in 1998 etc), especially since a fair amount of that data already exists if you read a particular crossover via the Storylines route.

It’s a big, shared universe and it would be nice to see that reflected in the online reader app. Especially since one of the big value propositions is that I don’t have to dig through my long boxes to find the next issue in a series in the first place. It seems to me that most of the data already exists and so it doesn’t seem to be a big lift to implement a pair of navigation buttons for “Previous/Next in Series” and “Previous/Next in Story.”

I’m trying to catch up on some major recent storyarcs and crossovers and it is annoying to have to back out and run whole searches for the next tie-in or prelude or whatever if they’re not already included in the storyline grouping in the DCUI app.

Please make this happen. This seems like such a simple add and should have been included in the first UX iteration of an app whose sole intention is to provide access to serialized storytelling! It’s been almost a year since the launch and I’m honestly kind of gobsmacked that this feature is still missing. 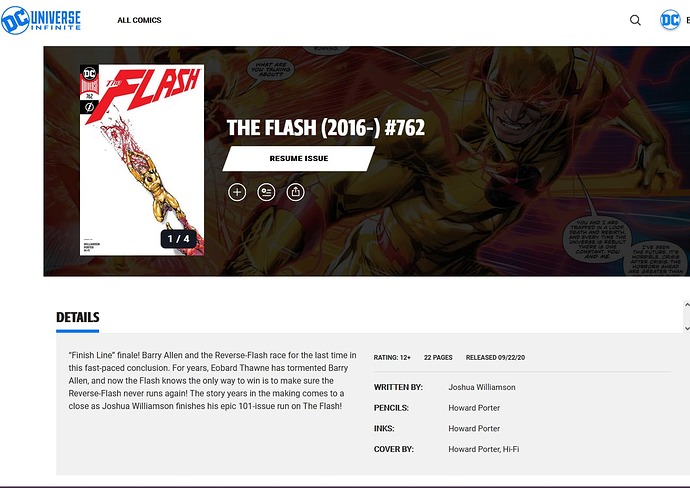 (Also, it wouldn’t suck to have the indicia data in the data box - “The Flash 762. Late November 2020” since the release date is not the cover date, and some folks might want to search by cover date)

I wouldn’t hate an advanced search option either, that would let you search specifically for a particular writer or penciller or character appearance or choose the volume of a particular title, etc. Some of this should already be populated fields in your database. I understand that not all will be there already. And it can’t possibly be comprehensive, especially when you have guest appearances of a character in someone else’s book without it being a particular cross-over or something, but still.

Many folks in your target audience are very nerdy about this stuff and would really appreciate having some of these features, especially ones that would be useful to new comics readers to help grow the readership, instead of it feeling like a Minimum Viable Product just to placate the nerds while real money and resources are sent to HBO Max.

Rant addendum over, thank you for your patience.

how do you change your user image