This morning, I was shocked to wake up and find out that DC Universe Infinite released its first exclusive comic out of nowhere. No hyping it up. No press. No discussion even on the DC Universe Community. The first DCUI exclusive comic just appeared. Let them live!: Unpublished Tales From the DC Vault #1 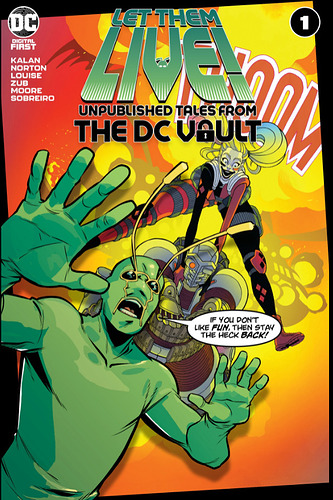 Why is there seemingly no press about the FIRST exclusive comic? Or even an announcement on the DCU Community. It’s a really weird oversight that honestly worries me a little. If DCU had full faith in DCUI, you would think they would at least mention the comic on the COMMUNITY section?

doot doot doot NP with the news breaks! If you couldn’t tell, that was my morse code machine.

You’ll be seeing this mentioned in our upcoming What’s New article- with big news like this, we respect our press friends who are circulating the announcement later this afternoon. I hope our Ambush Bug fans enjoy it!

Let Them Live is SUCH a cool concept. Much more than an “Ambush Bug comic,” this series gives new life to the many, many comics which (I know from my limited experience) never see the light of day despite 100% completion, due to one of a million logistical conflicts which can occur along the way. This is already a brilliant outlet for those comics to see new life, in the tradition of 1978’s Canceled Comic Cavalcade.

I was wondering “Never saw this before.” Turns out cuz there never was a before

I think it’s a really cool idea, but I hope we get something from a bigger name creator in the future.