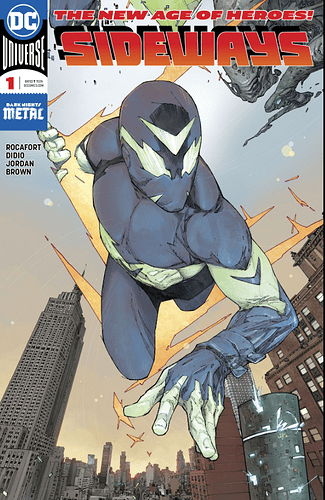 During the events of DARK NIGHTS: METAL, high school junior Derek James accidentally fell through a rift into the dark matter dimension! Now, as Sideways, he can create rifts in midair to leap through dimensions at will! But with that much power comes great liability—and cracks are starting to form in the fabric of the space-time continuum…

This week at DC Universe Book Club we are Stepping out with Sideways! Introduced during the New Age of Heroes line in 2018, Sideways became a personal favorite of mine. So needless to say, i really can’t wait to hear what everyone thinks about this week’s book.

I hope you all are staying safe!

Yay! I’m so excited to finally read this! I’ve never read it.

I read these issues in the Walmart Giants. It’s…um…Spider-Man.

I was just thinking about that earlier! How I can’t imagine the actual written pitch for this didn’t include the word "Spider-Man"in it. I mean, it had to have.

A lot of the New Age of Heroes stuff was like that. Damage was basically The Incredible Hulk and The Terrifics were the Fantastic Four.

Maybe that’s why I thought Silencer was the best of the lot.

In all fairness, I did like the plot of these issues well enough. And Sideways himself is a fun lead, if derivative. After all, I do love pre-Clone Saga Spidey.

I’ve never heard of this series until this thread and it was a fun read! I really enjoyed the relatability that Derek brings to the series. He’s your typical teenager who wants to be popular on social media not knowing the cost. I’m curious to know how the death of his mom will influence him to become more of a hero instead of a clout seeker.

I read the news arrival on this and was thinking about adding this series to my list of comics to read. Now I have a reason to actually read this sooner rather than later.

I really enjoyed the relatability that Derek brings to the series. He’s your typical teenager who wants to be popular on social media not knowing the cost.

My thoughts exactly. I thought it was actually a good representation of what teens are like TODAY. As opposed to other comic book teens, which can feel a bit dated.

Thanks for joining us!

Agreed! I was really excited to see him work and fight side by side with Zatanna/7 soldiers and Superman. It’s a big deal for a teenager who was just chasing likes/views.

Thank you! I’m newer to comics and was excited to see this book club thread with a series that was unfamiliar to me.

Ok, well I got thoughts and I don’t know how popular they are gonna be lol

Yep, I passed on reading it when it came out because I heard it was just a Spidey clone and let me tell you that is very accurate.

I think Peter Parker is a kid that needs to learn that with great power comes great responsibility and that he should be nicer to Uncle Ben because you never know when you are gonna see him again. Sarcasm I know but please look at the below panel and tell me that is not a Peter/Uncle Ben interaction? 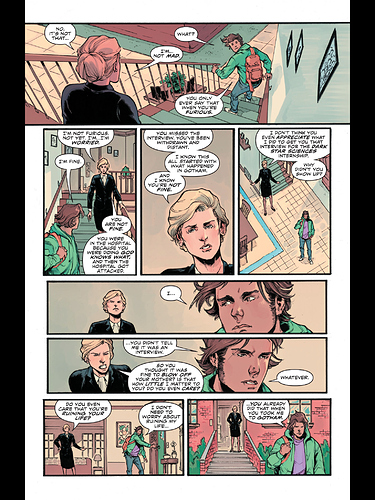 It’s more I feel that they missed an opportunity to tell a different tale than what had been told before. The powers are interesting and Dereck doesn’t come across as annoying like some young heroes do it’s just they made no attempt to hide from it being a Spidey clone. (For the record it probably doesn’t help that Spidey is one of my least favorite characters in comics)

Damian Wayne. I found myself very much wondering how Dereck would fit into the current team of teen titans and I think there could have been some good banter between those two. 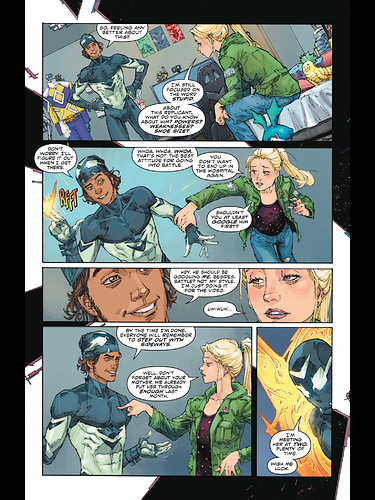 The whole I will figure out how to beat the villain when I get there thing had me cracking up and I think that this page does show one of the strengths of this series and that is the dialogue. It does a good job of not sounding like a 30 or 40 yr old guy trying to sound like a teen. It felt very organic and not forced so kudos for that.

All in all I always appreciate finding new things and it did have its good and bad and I can see why some would enjoy it but at the end of the day it just wasn’t for me.

can’t wait to read this :robotman_dp:

Damian Wayne. I found myself very much wondering how Dereck would fit into the current team of teen titans and I think there could have been some good banter between those two.

Now that would be a team up i would love to see!

Sorry the book didn’t work for you. Thanks for sticking with it!

It felt very organic and not forced so kudos for that.

And yes, I 100 % agree with this. What i loved most about the book. It didn’t feel “HELLO FELLOW KIDS” like a lot of other books tend to do.

No, I bought most of these as it came out, and the rest in here.

Like I said earlier, he’s very Peter Parkerish to me. Not that I disliked this series…it was entertaining…it’s just that he himself is very derivative to me in his secret ID.

The art throughout was great. I’m that last issue, I especially liked the pages with The Watcher in the Bleed. Or whatever they were calling them here, anyway.

G’Nort is always the right answer.

I thought he had a cool power but this story reminded me a lot of other comic book characters. Nightcrawler because of his ability to jump from one place to another and Spider-Man because of his loss of his mother at the end of issue 6 and his relationship that could develop into something more with his best friend. I think he is a comes off as a typical newcomer in that he relies on his power to win fights instead of using his brain to actually think before he joins a fight.

I think a interesting team up would be with Booster Gold. Booster because at his beginning he wanted glory more than anything and I think he could teach him about being an actual superhero and hopefully teach he that fame would come as long as he did the right thing.

My favorite page was 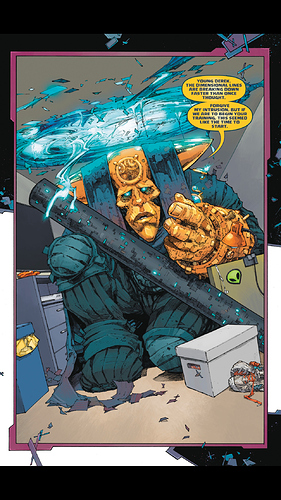 or the last issue when Sideways visits Tempus Fuginaut because it just was nice to see them bonding before his world changes.

The art throughout was great.

Agreed. Absolutely adored the art in the book.

Thanks for reading again with us!