Happy Friday Superfans! It’s time once more for a new round of action and adventure as only the Superman franchise can deliver!

This week, wedding bells are in the air, as intrepid Daily Planet reporters (and lovers) Lois Lane and Clark Kent finally exchange wedding vows, rings, smooches and, at long last, tie the knot and enter into a blissful marriage. Surely the wedding and honeymoon will be quiet and uneventful, right? Nope!

Here’s the wedding and honeymoon itinerary for the week:

Did it make you wipe a tear of joy away and want to have another slice of wedding cake, or did you want to pick up your gift to the Kents and return it?

There ya go Best Men and Bridesmaids! Enjoy the festivities and be sure to wish the happy couple well! 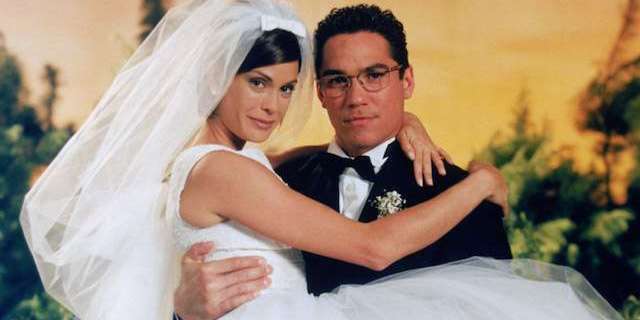 opens the doors to the church, puts out “Free Food!” sign

I wore a brown tux to my sister’s wedding

, wonder if I can still rent it to read this story

Free food does help, but we all know a wedding really isn’t kicking unless there’s a free bar!

@dogwelder9 From one Supermark to another, L&C is quite the fun show. Give it a whirl, you might find a new bingeworthy favorite

@Misfit Indeed friend. When TeriLois wore a red wig, I about fell off the couch.

@msgtv If that tux doesn’t work, I know a guy who can cut you a deal on a schway tuxedo t-shirt.

FREE BAR! Be sure to thank @Jay_Kay for the suggestion =)

There’s hooch, booze, Fizzy Lifting Drinks, Swamp Things, Dr. Manhattans and all of the other digital liquid refreshments you want, including Soder and Whak Soda.

I also haven’t seen any of Lois and Clark…well, maybe like the last few minutes of an episode when it came on super early in the morning when I had to get up for school. If I was perfectly honest, while I liked Superman in the animated series in the comics, I never really liked him much in live-action until Henry Cavill.

Interest in L&C may depend on how much you like romantic stories as it certainly is focused on the build-up to Lois and Clark becoming an item, then being a couple and eventually getting married.

Make no mistake, there’s plenty of action and adventure in the series. Along with plenty of nods to the Superman comics.

Lois & Clark also features one of the best Superman music themes ever. Very catchy and fitting to the character.

I remember watching the wedding that Sunday… and then watching it again in my LCS as I was picking up the Wedding album and my other week’s worth of comics.

@Don-El Thanks Pal! Please join in the wedding festivities when you’ve the time.

@golddragon71 Cool beans. Did you buy both covers of The Wedding Album or pick the one you liked best?

refills the bar, calls the band

So, where last week I thought the story showed the triangle era at its best. This week I think unfortunately it shows its weaknesses. Like the wedding issue itself, the longer arc feels disjointed as one writer/art team has difficulty handing the story off smoothly to the next.
The wedding issue starts strong with LL kicking butt, and ponytail Clark showing raw nerves. The issue also finishes strong with the wedding itself beautifully rendered and written. But, in between it’s difficult at time to tell who the characters are as their appearance changes drastically from artist to artist. Likewise. The pre-wedding events failed to hold my interest. On the plus side, Clark lost the rat tail and Lois and Clark are married.

Random thoughts
-Lois is swole as the kids say in the final issue as she kicks Naga bruh’s butt. Liked this issue
-Got Both covers, but they have been confiscated by my daughter who decided she should have them.
-Never break these two up

Ugh. A clip show. We’re getting a comic book version of a clip show! Skip!

I absolutely love this comic. Lucky for us, it doesn’t go for something gimmicky like an interruption of the ceremony.

The plot in Hawaii is nothing special, but this issue starts off well and ends with a great cliffhanger.

You can feel the writing staff struggling to figure out how to write “action comics” during a period when Superman’s powers are gone. The flashback feels desperate.

In today’s issue, the role of Lois Lane will be played by Linda Hamilton. And our villain runs into the same problem Lex did in Byrne’s Superman #2–no one is willing to buy that Clark Kent is Superman, no matter how jacked or anything-but-mild-mannered he is. Still, this one is easily the second-best issue of the lot.

AK, while I didn’t love the middle of the wedding issue also glad they did gimmick it
-Flash back episode weak and ruins story flow
-I’m completely jealous that you came up with the Linda Hamilton reference. Brilliant.

I agree that the art handoffs on The Wedding Album were a bit disjointed at times, but given the colossal talents that were united for this book, I tend to look the other way on most instances of iffy art.

Lois Lane and Sarah Connor could teach a thing or two to one another I bet. That’s the Terminator sequel that should be made!

The Adventures of Superman issue was a stretch for me, as I didn’t find the antagonist all that interesting. On the plus side it was neat to see characters from Superboy guest star.

Besides the wedding itself (which got me in the feels), my other favorite scene was the last page of STMOS #63. I loved Lois and Clark’s embrace against the sunset. It was drawn well and quite heartwarming.

I’d love to see Lois blow away Brainiac like Sarah did to the T-1000 in T2, especially if it’s to defend an injured Jon.