Hello Superfans! Welcome to another week of sensational Superman themed action and adventure, all wrapped up in a neat, nifty lil’ multimedia package.

In the early 90’s, starting with Superman #51 (available on DCU), each of the core (or main) Superman titles began to be published with a number inside a small triangle on the cover of every issue that denoted the issue’s place in the current year’s narrative in the Superman line.

So, Superman #51’s triangle reads “1991: 1”, which clearly indicates that narratively speaking, it was 1991’s first Superman book amongst the core Superman titles. This continued in the other two core Superman books of the time, Action Comics and The Adventures of Superman.

In May of 1991, Superman: The Man of Steel debuted and became the fourth ongoing core Superman title, with a triangle number that read “1991: 19”, meaning it was the 19th book of 1991 in the ongoing, now weekly narrative that ran through the core Superman titles.

1995 would see the debut of a fifth ongoing core Superman title, Superman: The Man of Tomorrow. Published on a quarterly basis and with a “1995: 28” triangle, it was the 28th Superman starring single issue in the Superman line in 1995. This title existed to fill in for months that featured five weeks, so that there would never be a Skip Week (a week where no issue of an ongoing Superman starring title was released).

While the triangle/S-shield notation was no longer on the covers of the core Superman titles from 2002 forward, the four books (Action Comics, The Adventures of Superman , Superman and Superman: The Man of Steel) did still occasionally crossover with each other, before eventually maintaining their own seperate narratives on a constant basis.

It wasn’t necessary to read every issue of the core Superman titles during the Triangle Era, as the books didn’t always intermingle with each other.

You could read Action Comics on its own just fine, and while you would miss out on what happened in the other core Superbooks, you could still enjoy each issue of Action (or whichever Superbook was your choice) and what they offered just fine.

Superman material that usually was not (but on rare occassions could be) part of the Triangle Era included one-shots, Annuals, and mini-series and ongoing titles in the Superman line that starred characters other than Superman. For example, titles such as Guardians of Metropolis, Steel, Superboy, Superboy and the Ravers and Supergirl.

So…lengthy (but hopefully understandable) history lesson aside, let’s FINALLY get into this week’s offerings, which are as follows:

“Panic in the Sky!”, one of the first major storylines of the Triangle Era, which takes place in:

The Bonus Watch episode of Adventures of Superman isn’t necessary, its just a freebie thrown in due to its title.

Take flight and enjoy fans! I hope you have fun with this week’s selections =) 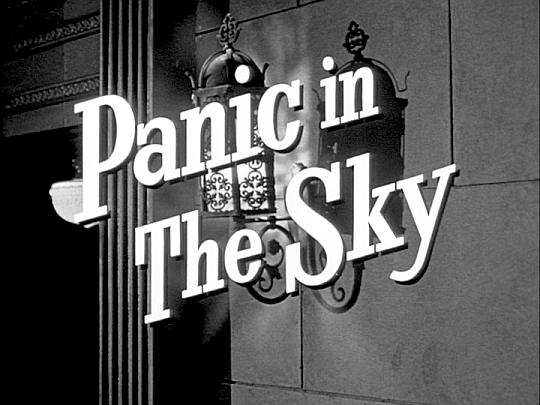 This arc is so underrated. It’s probably the best thing to come out of the Jurgens era outside of maybe Reign of the Supermen. Maybe.

@batwing52 In my re-read of this story for the club, I would agree that Panic is easily one of the best 90’s Superman stories. It’s also one of the most underrated.

@dogwelder That '93 trade is how I first read Panic in the Sky. I no longer have that book, but it was a favorite trade of mine.

I kinda despise this story, so all of you should feel free to call it underrated.

(I do like the opening bit in Action Comics #674 with Matrix Supergirl disguised as Superman, though.)

Very excited to read this. I was in an infantry brigade at the time this came out in Ft Ord, CA very busy, deployed a lot. I was reading comics but with lots of gaps, so don’t know if I hit this story or not.

On the DC Universe Community Events, all clear!

@AlexanderKnox The Milton Fine Brainiac isn’t my favorite by any stretch. That said, I felt he was written well in this story.

@msgtv Cool beans! Eager to read your thoughts on this one.

Just finished the second issue. I must admit, first time I saw Brainiac in this story my thought was “what’s with the douchy soul patch?”

Also, I didn’t know that Dregga from the Warworld episodes of JL:TAS was from the comics, that’s pretty neat. I have to say, the way he burns the symbol top his chest in the cartoon is way more badass than just wearing a comfy Superman sweater.

@Jay_Kay My first exposure to Draaga was in the Justice League TV show, so seeing him here (and in the Exile arc as well) was fun.

I agree about him making a greater impression (figuratively and literally) on TV, but that Superman top of his looks coozy. It probably has a really strong Warworldian funk to it though.

Thanks for chiming in. I’m eager to read your continued thoughts as you progress on this week’s material.

@Jay_Kay I forgot to write this in my previous post, but I agree that the Matrix Supergirl does tend to be astray and easily manipulated. Poor thing.

Definitely braniac was a jaw dropper but doomsday tho

5 issues in and enjoying the big show spectacular. No getting around the just weirdness of the angry Ollie Queen Brainiac. Story is still good, but it’s like it’s a different character. Also, huge fan of Maxima. Don’t know if people want to avoid writing her today cuz they might think her motivations are dated, but I think she rocks.
Miss the triangle days, Superman weekly in a giant story that tied together.

Have you read her adventures in Justice League America and/or Extreme Justice?

@msgtv Maxima’s end as a villain in Panic in the Sky was an interesting twist.

I enjoyed her as a hero, but she reverted to villainy later on in the 90’s (see Superman: The Man of Tomorrow #7).

For those curious/on the fence, the comic version of Panic in the Sky also stars:

The comic version of Panic in the Sky truly has something for everyone, while its Justice League Unlimited adaptation is among the best episodes of that series, and given the immense quality of JLU, that’s saying something.

On Maxima coming back, she already has. She was in the last arc of Supergirl in the New 52. Her motivation was definitely different, and not just because she was a lesbian.

@Jay_Kay Right you are. With this talk of Maxima, I’m inclined to re-read those issues of New 52 Supergirl that she was in.

Fun Fact: Maxima was also the field leader of the 90’s iteration of the Superman Revenge Squad.

Sorry Vroom I haven’t even started I will try to knock these out. I have today and tmrw yeah? also bummed you left discord. Is it because of me

and all my random pics?