Faster than a streak of lightning!

More powerful than a supernova!

The embodiment of truth, justice and freedom for all!

An astonishing force of good from the planet Krypton, gong smash SUPERMAN!

Welcome back for another round of action packed adventure Superfans! This week, we’re taking a look at stories focused on Superman’s greatest weakness: Kryptonite.

How did the Man of Steel overcome this lethal substance in two different tales of his first exposure to it? Read and watch to find out!

Here’s what’s on deck for this week’s multimedia potpourri:

Have you read Sale’s other work involving Superman and if you have, where do you rank Kryptonite?

What are your thoughts on this episode, it’s characters (Lois sure knows how to get a to-go order in and fast, doesn’t she?) and how it introduced the DCAU to Kryptonite?

As always, you’re absolutely welcome to discuss anything else that comes to mind regarding this week’s content. This spoiler friendly chit-chat runs until next Friday, August 9th. 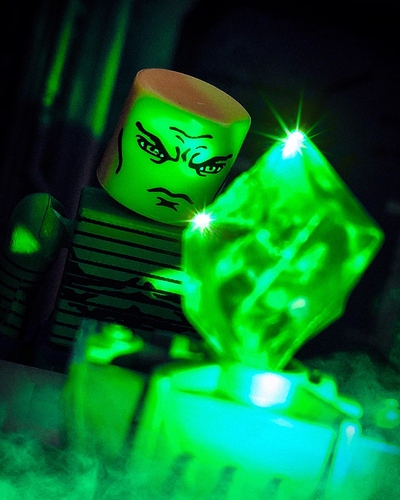 On the Fleischer short. The quality of animation and story is so fantastic for a 7 minute cartoon. I know DC has to prioritize series they can sell or will draw subscribers, but these shorts really deserve to be cleaned up, audio improved and generally remastered. On the story itself Supes is somewhat de powered and Lois has no nose, but otherwise great.

I got to get me a Superman hat and a Superman shirt to go with this club… yeehaw!;!

Calendar event submitted. All aboard the Kryptonite Train!

@msgtv Warner Brothers Home Video actually did remaster the Fleischer Superman shorts upon acquiring them in the mid-00’s.

The problem is, it was a standard definition remaster that debuted on the Special Edition DVDs of Superman: The Movie and Superman II in 2006 (they, and other titles, tied into the home video release of Superman Returns). These remastered SD transfers are what is currently in use on DC Universe.

They were great for the time, but haven’t had an official high definition upgrade and absolutely deserve it (even better would be a 4K upgrade).

There is a Blu-ray release of the Fleischer shorts, but it’s not from WBHV, and it’s absolutely terrible. The opening and closing Paramount logos are edited out, the company that released it puts their logo on screen during each short and the transfers were abysmal. It’s to be avoided at all costs.

Hopefully an HD or better release of the Fleischers’ Superman work comes along from Warner Home Entertainment at some point. They’re absolutely the best of the best in the home video industry, and that sentiment extends far, FAR beyond their extraordinary DC Comics based home video catalog.

@Don-El Thanks bud. I appreciate it =)

nudges the Kryptonite on the table

Half way through, first time reading.
-Sentient Rock?
-Love Sale’s depiction of Lois. She’s normally shown as skinny and taller for a women. Sale has her shorter, a little curvy, with a very cute expressive face. Feels like she’s overflowing with energy.
-Superman is more of a mixed bag to me. There are panels that look great and others he looks overweight with no neck.
-Nice use of Jimmy as the tech guy
-A new building for Lex to put his X-ray machine in, Superman twists the knife.
Cooke’s idea of a new Superman being afraid because he doesn’t know his limits is great.
-More Royal Flush Gang.

@msgtv I loved the inclusion of the Royal Flush Gang. That was a nice touch.

I agree with you on Sale’s renditions of Lois and Superman. Lois has the brass she’s known for, while Superman looked a bit off in select panels. Overall though, I liked how Sale drew him.

The idea of sentient Kryptonite of a sort was one of the things that intrigued me when this story debuted in 2006. Bridgewater served as an interesting narrator too.

Will be back to finish on the Animation I believe you know I am a Huge Fleischer fan but I need to go for a run. I just got back from a long hike in the woods but that didn’t do it I guess. After being sick last week I am feeling very cooped up.

#. Eager to hear your thoughts on this week’s cartins.

Finished the reading (I’ll get to the episode, jeez stop riding me man). Anyway.
-Loved the big reveal that it wasn’t a thinking rock, and Gallo wasn’t a complete weirdo for standing naked in front of it. In one page, the whole story comes together like boom. Really nice.
-Lots of heart in this story, Clark and Ma/Pa, Lois and Supes, Supes and his own fears/learning about Krypton.
-Sale does get into a nice groove on Superman
-Still really dig Lois Lane

@msgtv I completely agree on the heartfelt aspects found in Kryptonite. Cooke really nailed that in his writing.

Eager to hear your thoughts on the cartunez.

Vroom, Dan the Man was looking for you on Discord. I guess we’ll all catch up with you once Community 2.0 arrives.

@Don-El I don’t have Discord anymore, but Dan’s welcome to talk shop here any ol’ time.

pulls out a seat for DanTheManOne1

“Have you read the Kryptonite arc of Superman Confidential before?”

Nope – haven’t read anything from this title before, but I really liked it overall, perhaps more for the characters involved than the actual plot. Clark/Superman, Lois, Jimmy, Lex, Ma and Pa Kent, all get some good moments to shine in this one.

While I doubt the rest of the stories in this series will be up to this quality, I’m definitely going to read it all.

“What are your thoughts on the character Bridgewater and his evolution throughout the story?”

Bridgewater was a…kind of odd addition to this story. At first with the prologues, I was thinking “are they doing this from the perspective of the Kryptonite? That’s weird.” Then I was thinking “are they actually making Kryptonite…sentient? I don’t think I like that.” Once Bridgewater himself was revealed I thought while it was an interesting way to get Clark to discover his origins, it felt honestly rather unnecessary. Something like how it’s done in “A Little Piece of Home” is more than enough.

"Artist Tim Sale is no stranger to the Superman franchise, having pencilled the acclaimed mini-series Superman: For All Seasons and a story in the Superman/Batman: Secret Files and Origins one-shot (both written by Superman and Superman/Batman scribe Jeph Loeb).

Have you read Sale’s other work involving Superman and if you have, where do you rank Kryptonite?"

Honestly, while Sale is an amazing artist in terms of mood and storytelling, I’ve never been a big fan of how he draws the actual superheroes. With Superman in particular, his face often looks too small for his head. It’s not enough to pull me out of the story or find it hard to read, it’s just not my preference. I think I would have liked this a bit more if Cooke himself drew this.

@Jay_Kay The rest of Superman Confidential is quite fun, especially if you enjoy seeing Superman fight the forces of Apokolips. Or if you like mermaids/merpeople

As always, thanks for chiming in.

The Animated Adventures episode tracks with the standard Kryptonite discovery story, accidentally found, Superman weakened during fight, Lex figures it out. Of course elevated by a great voice cast. Can’t very lovely and talented Dana Delaney get a gig as an older Lois on the Crisis crossover. And why in the world would anyone open a museum in Metropolis? Only worse location is Gotham.