Greetings Superfans and TGIF! The mood is right, and it’s time for another week of action packed adventure in the DC Universe Superman Book Club!

While he didn’t replace the real deal of steel, John Henry Irons would ultimately go on to forge his own stronger than steel legacy, as an ally of Superman’s, a member of the Justice League and most importantly, a wonderful hero in his own right.

Spoilers are welcome in this discussion, which runs from July 26th to next Friday, August 2nd.

Forge your armor, pick up your hammer (wearing a cape is optional) and take flight via your rocket boots into the supremely strong world of Steel! 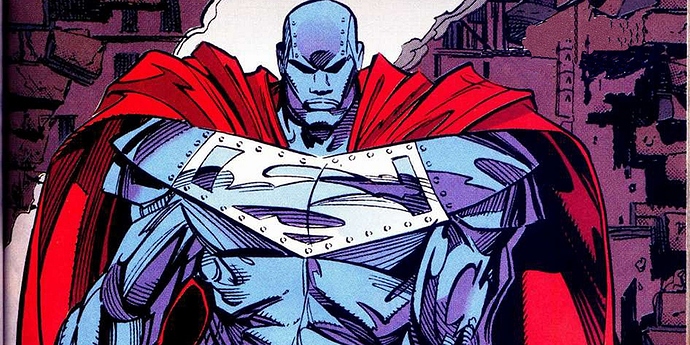 I’ve read many of the Steel comics. I always felt there was more potential there than ever appeared on the page. I recall the initial arc being pretty good, but it quickly got worse. Felt like a pretty generic 90s comic so I stopped collecting it.

I’m in but when this tour of Superman’s supporting cast hits Bibbo Bibbowski I’m out.

@msgtv What, no love for Bibbo? He’s everyone’s fav’rit Soder loving feller with a joint down in Hobb’s Bay.

Have no fear, the Man of Steel himself is on a return flight. He’ll be in town by next week

His inclusion in Reign of the Supermen seemed a bit unfortunate, as his story of getting highly-advanced guns off the street felt too disconnected from the larger event and thus irrelevant. Even though Reign gave his character some high-profile attention, it also made him feel like a fifth wheel. Perhaps it would have worked better if he had been introduced during Funeral for a Friend or even sooner. And then he lost his S-Shield in his solo title (for a while, at least), and to add insult to injury, he ended up in Kazaam 2: Shaq Harder, a movie that even Shaft himself couldn’t save.

Anyway, I read the first issue of the solo series back in '94, but I stopped there. And I’ll take his comic version over the STAS version.

Calendar submitted don’t see it yet though

Fun Fact: in the DCAU, Bibbo was voiced by Brad Garrett, who also played Lobo in the DCAU and Ray’s brother on Everybody Loves Raymond.

Will def read this one. sorry meant to read Jimmy O but was a beach bum all week.

@Aquamon No worries. Did you use a metal detector on the beach?

I read the five issues. They’re decent enough, though they suffer from mid-90s excess. Did that villain really need a Cable-esque cyborg arm? The issues also feel a little awkward when you remember that white people are writing them. (We’re not to the Christopher Priest run on the book yet.) The book kinda reminds me of Marvel’s Venom series (technically a string of loosely-connected miniseries) from around the same time.

@Vroom No I didn’t I would love to do that one day in the winter just after tourist season though.
Just surfing and body surfing also saw the 2 remaining members of Sublime play. I’ve seen them before but it was still a good time.

Also I love what you’ve done with your hair is that mermaid red?

@AlexanderKnox I agree that these issues of Steel do have their share of 90’s excess, but that was the style then. They make for interesting “artifacts” in a sense.

I haven’t read Priest’s run on Steel yet, but I’m curious to do so. I enjoy most of his output.

Thank YOU for noticing (and VO5 for the hairdye)

@Aquamon I don’t do clowns, but… tag!

You are now the it! Go watch the Heavy Metal episode of STAS already

Okay, short thoughts after issue 3
-this series was marinated in the 90s, then had 90s sauce liberally applies during grilling, the topped with a fine 90s chutney.
-the Colonel is the head of some corporation, but yet wears a uniform? I and the Col.are confused
-street thug #1: Man, this weapon is the s@#$. What should we call it?
-street thug #2: let’s name it after my last gang. They was bad bunch of m#*)@%£[¥.
-street thug #1: what’s their name?
-street thug #2: Toastmasters, man. Toastmasters.

I like them both, but I enjoyed the Steel in the STAS episode a little bit more.

From what I’ve seen / read, I like him the most throughout the Death and Return of Superman story.

I think every grandma needs the attached “The boss” shirt. =) 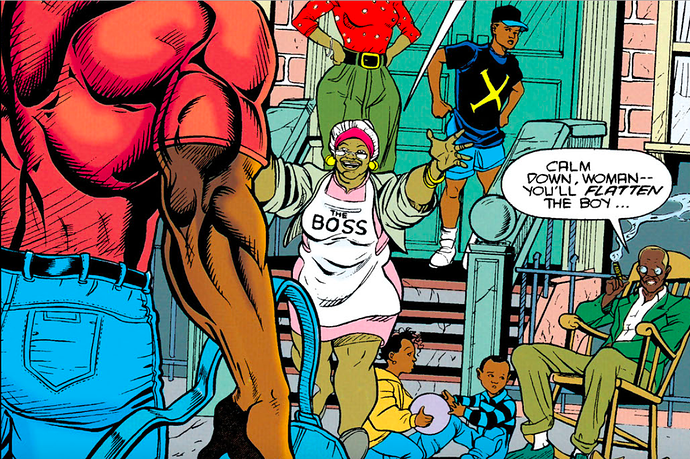 @msgtv I rolled my eyes at “Toastmasters” too. Toastmaster sounds like a cooking appliance, not a weapon.